2019 saw the release of multiple media properties that defied convention and made a name for themselves amongst the stars, from Parasite’s legendary Oscar sweep to Billie Eilish’ age-defying wins at the Grammys, and the record breaking close of the new Star Wars trilogy. In keeping with the fan demand for complex, nuanced content, Tom Doherty Associates is launching their Chaos and Cosmos campaign to run through the remainder of 2020.


Featured authors include Kit Rocha (Deal with the Devil), S.A. Hunt (I Come With Knives), Alaya Dawn Johnson (Trouble the Saints), Kate Elliott (Unconquerable Sun), Mary Robinette Kowal (The Relentless Moon), Ryan Van Loan (The Sin in the Steel), Jenn Lyons (The Memory of Souls), Andrea Hairston (Master of Poisons), Christopher Paolini (To Sleep in a Sea of Stars), S.L. Huang (Burning Roses), Cory Doctorow (Attack Surface), and V.E. Schwab (The Invisible Life of Addie La Rue). This illustrious group of writers includes bestsellers, award-winners, scholars, and influencers. Through this campaign, the authors will have a combined organic reach of nearly a million.


The Chaos and Cosmos campaign will include extensive outreach to social media influencers, a robust marketing and advertising campaign with outlets like Den of Geek, The Mary Sue, and Tor.com, exclusive content from select participating authors, and Chaos and Cosmos branded panels at conventions and events throughout the year. Fans can follow along with #ChaosAndCosmos. 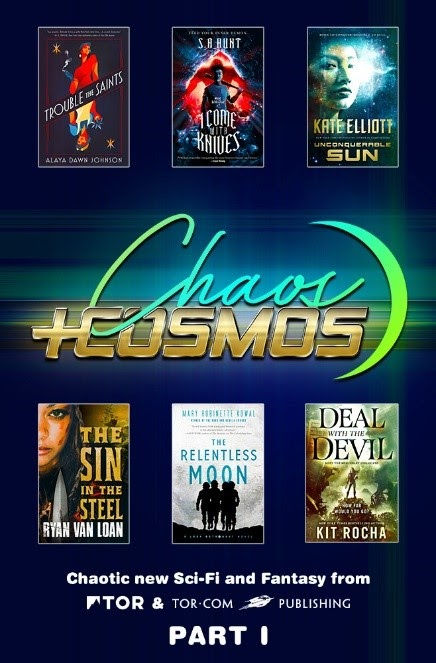 GET TO KNOW THE AUTHORS OF CHAOS AND COSMOS

Kit Rocha, author of Deal with the Devil
Kit Rocha is the pseudonym for the author duo Donna Herren (@totallydonna) and Bree Bridges (@mostlybree). They are best known for their gritty and sexy dystopian BEYOND series, and were the first indie authors to receive a Romantic Times Reviewer’s Choice Award. They currently live three miles apart in Alabama and spend their non-writing time caring for a menagerie of animals and crafting handmade jewelry, all of which is chronicled on their various social media accounts

S.A. Hunt, author of I Come With Knives
S. A. HUNT is a U.S. veteran, speculative fiction author, and Winner of Reddit.com/r/Fantasy's "Independent Novel of the Year" Award. They live in Petoskey, Michigan. Burn the Dark is the first volume in their Malus Domestica series, followed by the sequel I Come with Knives.

Alaya Dawn Johnson, author of Trouble the Saints
ALAYA DAWN JOHNSON has been recognized for her short fiction and YA novels, winning the 2015 Nebula Award for Best Novelette for “A Guide to the Fruits of Hawai’i,” which also appears in The Best American Science Fiction and Fantasy (2015), guest edited by Joe Hill. Her debut YA novel, The Summer Prince, was longlisted for the National Book Award for Young People’s Literature. Her follow up YA novel, Love is the Drug, won the Andre Norton Award in 2015. A native of Washington, D.C., Johnson is currently based in Mexico City, where she received a masters degree in Mesoamerican studies and now plays in a bossa nova band.

Kate Elliott, author of Unconquerable Sun
Kate Elliott is the author of twenty-five fantasy and science fiction novels, including a YA fantasy trilogy (begun with Court of Fives), the acclaimed science fiction novel Jaran, and a short fiction collection, The Very Best of Kate Elliott. Born in Oregon, she now lives in Hawaii. You can find her online at kateelliott.com, imakeupworlds.com, Facebook, and @KateElliottSFF on Twitter.

Mary Robinette Kowal, author of The Relentless Moon
Mary Robinette Kowal, author of The Calculating Stars and The Fated Sky, is a professional puppeteer and voice actor who has performed for LazyTown (CBS), the Center for Puppetry Arts, and Jim Henson Pictures. Her design work has garnered two UNIMA-USA Citations of Excellence, the highest award an American puppeteer can achieve, and was the previous vice-president and secretary of Science Fiction and Fantasy Writers of America. Mary is an accomplished storyreader and has recorded the audiobooks for most of her novels.

Ryan Van Loan, author of The Sin in the Steel
RYAN VAN LOAN served six years in the US Army Infantry, on the front lines of Afghanistan. He now works in healthcare innovation. The Sin in the Steel is his debut novel. Van Loan and his wife live in Pennsylvania.

Jenn Lyons, author of The Memory of Souls
Jenn Lyons lives in Atlanta, Georgia, with her husband, three cats, and a nearly infinite number of opinions on anything from Sumerian mythology to the correct way to make a martini. Formerly a video game producer, she now spends her days writing fantasy. A long-time devotee of storytelling, she traces her geek roots back to playing first edition Dungeons & Dragons in grade school and reading her way from A to Z in the school's library.

Andrea Hairston, author of Master of Poisons
Andrea Hairston is a novelist, essayist, playwright, and the Artistic Director of Chrysalis Theatre. She is the author of Redwood and Wildfire, winner of the 2011 Tiptree Award and the Carl Brandon Kindred Award, and Mindscape, shortlisted for the Phillip K Dick and Tiptree Awards, and winner of the Carl Brandon Parallax Award. In her spare time, she is the Louise Wolff Kahn 1931 Professor of Theatre and Afro-American Studies at Smith College. She has received the International Association of the Fantastic in the Arts Distinguished Scholarship Award for outstanding contributions to the criticism of the fantastic. She bikes at night year-round, meeting bears, multi-legged creatures of light and breath, and the occasional shooting star.

Christopher Paolini, author of To Sleep in a Sea of Stars
Christopher Paolini was born in Southern California and has lived most of his life in Paradise Valley, Montana. He published his first novel, Eragon, in 2003 at the age of nineteen, and quickly became a publishing phenomenon. His Inheritence Cycle—Eragon and its three sequels—have sold nearly 40 million copies worldwide. To Sleep in a Sea of Stars is his first adult novel.

S.L. Huang, author of Burning Roses
S.L. Huang has a math degree from MIT and is a weapons expert and professional stuntwoman who has worked in Hollywood on Battlestar Galactica and a number of other productions. Huang's short fiction has appeared in Strange Horizons, Nature, Daily Science Fiction, and The Best American Science Fiction & Fantasy 2016. She is the author of Zero Sum Game, Null Set, and Critical Point.

Cory Doctorow, author of Attack Surface
CORY DOCTOROW is a regular contributor to The Guardian, Locus, and many other publications. His award-winning novel Little Brother was a New York Times bestseller, as is its sequel, Homeland. His novella collection Radicalized was a CBC Best Fiction of 2019 selection. He lives with his family in Los Angeles.

V.E. Schwab, author of The Invisible Life of Addie La Rue
VICTORIA “V.E.” SCHWAB is the #1 New York Times bestselling author of more than a dozen books, including the acclaimed Shades of Magic series, Villains series, This Savage Song, and Our Dark Duet. Her work has received critical acclaim, been featured in the New York Times, Entertainment Weekly, Washington Post and more, translated into more than a dozen languages, and has been optioned for television and film. When she’s not haunting Paris streets or trudging up English hillsides, she lives in Edinburgh, Scotland and is usually tucked in the corner of a coffee shop, dreaming up monsters.

Tom Doherty Associates (TDA)—better known by its imprint of Tor Books, is a New York-based publisher of hardcover, trade softcover and mass market books founded in 1980. Imprints include Tor Books; one of the leading publishers in science fiction, fantasy, and horror since 1980, Forge Books; committed to publishing quality thrillers, mysteries, historical fiction and general fiction, Tor Teen and Starscape; dedicated to publishing quality science fiction, fantasy and contemporary fiction for young readers, Tor.com Publishing; publishes original fiction, art, and commentary on fantasy, science fiction, and related subjects across all media by a wide range of writers from all corners of the field

About Tor Books
Tor Books, an imprint of Tom Doherty Associates, was founded in 1980 and committed to quality speculative literature. Between an extensive hardcover, trade softcover and mass market paperback line, a growing middle grade and YA list, and robust backlist program, Tor annually publishes what is arguably the largest and most diverse line of science fiction and fantasy produced by a single English-language publisher. Books from Tor have won every major award in the SF and fantasy fields, including Best Publisher in the Locus Poll for 31 years in a row.

About Tor.com Publishing
Tor.com publishes original fiction, art, and commentary on fantasy, science fiction, and related subjects across all media by a wide range of writers from all corners of the field—including professionals working in the genres as well as fans. In addition to the short fiction published free online, Tor.com also publishes novellas & the occasional novel. The aim of the site is to provoke, encourage, and enable interesting and rewarding conversations with and among our readers. Tor.com debuted online July 20, 2008 and currently reaches 3 million readers a month.
Posted by Qwill at 6:22 PM