Interview with Kawai Strong Washburn, author of Sharks in the Time of Saviors


Please welcome Kawai Strong Washburn to The Qwillery as part of the 2020 Debut Author Challenge Interviews. Sharks in the Time of Saviors was published on March 3, 2020 by MCD. 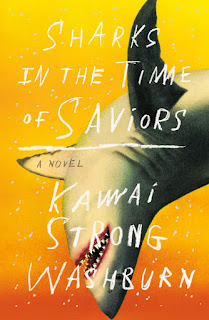 The Qwillery:  Welcome to The Qwillery. What is the first fiction piece you remember writing?

Kawai Strong Washburn:  Thank you for having me! In middle school I wrote a few short science fiction stories that I remember, more or less. Heroes crash landing on distant landscapes, zombie tentacles fighting each other. Really sophisticated, compelling stuff.

KSW:  It depends on the format. I'm comfortable 'pantsing' a short story, but for longer works I prefer a hybrid approach: working out characterization and the plot it implies upfront, building out disparate scenes with an eye for their internal logic/causal chain based on characterization, etc. I find this still allows for serendipity, which is what a lot of writers are afraid of when they think of planning.

KSW:  Finding a way to make writing fit in with the larger concerns of my life (family, other employment, climate policy work). As much as I love writing, it still feels like a largely selfish endeavor, one that ultimately has to defer to parenthood and, just as importantly, active local/state/national work on climate change.

KSW:  The feeling I get from performing or witnessing live hula; deep interactions with the natural world; live readings and compelling oratory more generally; the transformative reading experiences I have, which continually reassure me of the power of literature.

TQ:  Describe Sharks in the Time of Saviors using only 5 words.

TQ:  Tell us something about Sharks in the Time of Saviors that is not found in the book description.

KSW:  There's a make-out scene in a bathroom, and it's simultaneously far more and far less sexy than you think.

TQ:  What inspired you to write Sharks in the Time of Saviors?

KSW:  My experience as kama'āina (local to Hawai'i, a child of the land) moving to the continental United States, especially after time living abroad in Central America and Sub-Saharan Africa. There are many differences between a place like Hawai'i and the rest of the United States. Another huge influence are the many transcendent (I don't use the word lightly) experiences I've had in the natural world, particularly in remote backpacking, mountaineering, surfing, and rock climbing. Finally, my interest in the potential for a sustainable future, one in which our modern lifestyle is corrected into something more in harmony with nature.

TQ:  What sort of research did you do for Sharks in the Time of Saviors?

KSW:  Lots of research on prison systems and emergency medicine, as well as ancient Hawaiian mythology. I actually have some experience with all three of these topics, but needed to really collect all the pertinent details to make sure they worked appropriately in the context of the story.

TQ:  Please tell us about the cover for Sharks in the Time of Saviors.

KSW:  It's a rad, bright, orange-yellow gradient with a bold image of an inverted shark and embedded foil water-effect droplets, with lettering that suggests shark teeth. The cover was designed by Rodrigo Corral, with the shark image drawn by Matt Buck and lettering by Na Kim.

TQ:  In Sharks in the Time of Saviors who was the easiest character to write and why? The hardest and why?

Easiest: Malia, probably because she was the closest to the place I was in life mentally and emotionally for large portions of the book, and also because she's generally speaking retrospectively from a single place and time.

Hardest: Dean, not only because of the work I had to do adapting Hawaiian Pidgin to something that felt readable and not terribly distracting on the page, but also because he does many things that I find objectionable (and more generally make me uncomfortable). I had to find a way to show his blind spots and self-justifications, not run from them, but also find a way to empathize with him.

TQ:  Does Sharks in the Time of Saviors touch on any social issues?

KSW:  Absolutely. It touches on issues of race, class, gender, sexuality and cultural identity in the United States, as well as the colonial history of Hawai'i.

TQ:  Which question about Sharks in the Time of Saviors do you wish someone would ask? Ask it and answer it!

Q: How do you think this book speaks to our current moment:

A: One of the issues that is forefront in my mind--probably the greatest challenge of the 21st century--is how we can reconfigure our modern lifestyle in a way that achieves some semblance of ecological balance. My novel speaks to that most directly in its rendering of the almost interpersonal relationship between people and the land, particularly as we see it through Kaui's character arc and plotline.

TQ:  Give us one or two of your favorite non-spoilery quotes from Sharks in the Time of Saviors.

"The golden feeling of the owl's last flight stayed with me, even if the vision had long since faded into the dark."

"I could see him there, the waves and tides and gods dragging him around. But I'm in the water, too, I wanted to say. No one's watching to see if I stay afloat."

KSW:  Another novel! It spans (roughly) two hundred years, from ancient Hawai'i to future Hawai'i. There's reincarnation and a band of female pirates and slick hot technology and more courage and bravery than you can fit in a nation.

KSW:  Thank you for having me! 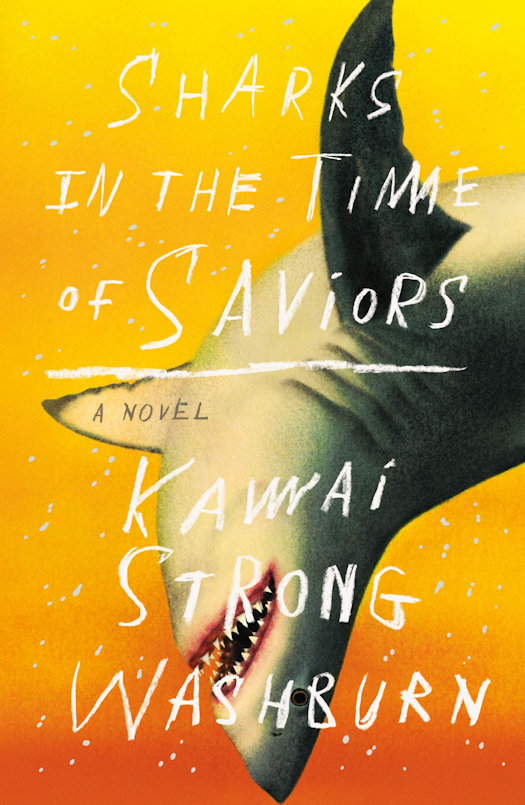 Sharks in the Time of Saviors is a groundbreaking debut novel that folds the legends of Hawai’ian gods into an engrossing family saga; a story of exile and the pursuit of salvation from Kawai Strong Washburn.

“Old myths clash with new realities, love is in a ride or die with grief, faith rubs hard against magic, and comic flips with tragic so much they meld into something new. All told with daredevil lyricism to burn. A ferocious debut.” —Marlon James, author of Black Leopard, Red Wolf

“So good it hurts and hurts to where it heals. It is revelatory and unputdownable. Washburn is an extraordinarily brilliant new talent.” —Tommy Orange, author of There There

In 1995 Kailua-Kona, Hawaii, on a rare family vacation, seven-year-old Nainoa Flores falls overboard a cruise ship into the Pacific Ocean. When a shiver of sharks appears in the water, everyone fears for the worst. But instead, Noa is gingerly delivered to his mother in the jaws of a shark, marking his story as the stuff of legends.

Nainoa’s family, struggling amidst the collapse of the sugarcane industry, hails his rescue as a sign of favor from ancient Hawaiian gods—a belief that appears validated after he exhibits puzzling new abilities. But as time passes, this supposed divine favor begins to drive the family apart: Nainoa, working now as a paramedic on the streets of Portland, struggles to fathom the full measure of his expanding abilities; further north in Washington, his older brother Dean hurtles into the world of elite college athletics, obsessed with wealth and fame; while in California, risk-obsessed younger sister Kaui navigates an unforgiving academic workload in an attempt to forge her independence from the family’s legacy.

When supernatural events revisit the Flores family in Hawai’i—with tragic consequences—they are all forced to reckon with the bonds of family, the meaning of heritage, and the cost of survival.

Kawai Strong Washburn was born and raised on the Hamakua coast of the Big Island of Hawai‘i. His work has appeared in Best American Nonrequired Reading, McSweeney’s, and Electric Literature’s Recommended Reading, among other outlets. He was a 2015 Tin House Summer Scholar and 2015 Bread Loaf work-study scholar. Today, he lives with his wife and daughters in Minneapolis. Sharks in the Time of Saviors is his first novel.