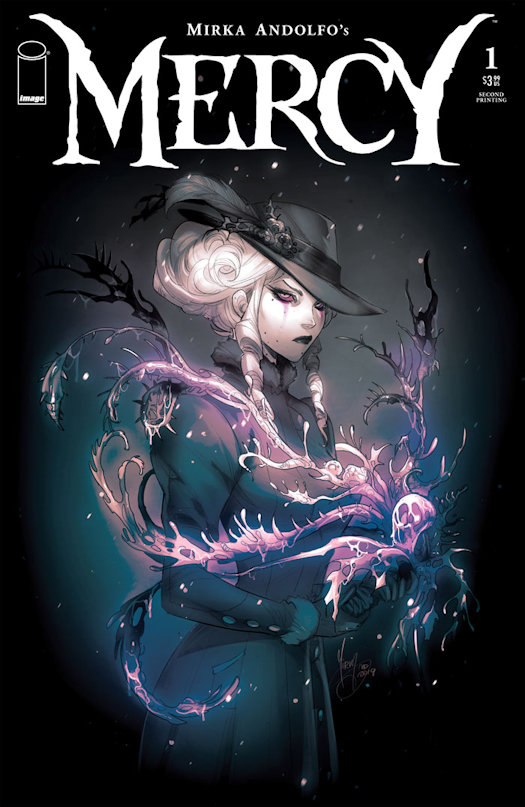 PORTLAND, Ore. 03/06/2020 — On Wednesday, Mirka Andolfo’s Mercy #1 fan mania reached a fever pitch, completely overwhelming the industry, and the entirety of the title’s 60K print run sold out instantly at the distributor level upon release. Now Image Comics is pleased to reveal the exclusive artwork by Andolfo for this Mercy #1, second printing cover ahead of Andolfo’s Seattle signing tour.

Comic Book Resources called Mercy #1 “a Victorian Gothic Horror Masterpiece,” while ComicsBook.com said of it: “a gem of a comic.”

Mercy begins when the placid mining village of Woodsburgh is disturbed by a series of brutal murders, sending the settlement into turmoil. As the first snow covers the chaos in a white blanket, a mysterious woman in black arrives, eliciting a totally different kind of unrest. But who is Lady Hellaine, really? And what’s her secret agenda?

Mercy explores topics of “otherness,” damnation and redemption, and what it means to be a monster in a horror tale perfect for fans of Penny Dreadful, Crimson Peak, Carnival Row, and Dark Shadows. More exciting details about the goth-inspired, Victorian monster series will be unveiled as the United States release date approaches.


ABOUT IMAGE COMICS
Image Comics is a comic book and graphic novel publisher founded in 1992 by a collective of bestselling artists. Image has since gone on to become one of the largest comics publishers in the United States. Image currently has six individuals on the Board of Directors: Robert Kirkman, Erik Larsen, Todd McFarlane, Marc Silvestri, Jim Valentino, and Eric Stephenson. It consists of five major houses: Todd McFarlane Productions, Top Cow Productions, Shadowline Comics, Skybound Entertainment, and Image Central. Image publishes comics and graphic novels in nearly every genre, sub-genre, and style imaginable. It offers science fiction, fantasy, romance, horror, crime fiction, historical fiction, humor and more by the finest artists and writers working in the medium today. For more information, visit www.imagecomics.com.
ABOUT MIRKA ANDOLFO
Mirka Andolfo is the creator of bestselling series such as Unnatural (2016, Panini Comics, Image Comics in the United States) and Sacro/Profano (2013, Dentiblù). As an illustrator, cover artist, and writer, she works with some of the most prestigious publishing houses in the world, including Image Comics, DC Comics, Marvel Comics, The Walt Disney Company, Éditions Glénat, BOOM! Studios, Valiant, Dynamite, and Aspen Comics.
Posted by Qwill at 6:04 PM