REAVER Coming in July from Rebekah Isaacs and Justin Jordan

BUFFY THE VAMPIRE SLAYER’S REBEKAH ISAACS TEAMS WITH LUTHER STRODE’S JUSTIN JORDAN ON A GRIM, NEW FANTASY SERIES FOR THE GAME OF THRONES FAN IN REAVER
PORTLAND, OR 04/16/2019 — Just in time for fans anticipating Game of Thrones withdrawals, comes an all- 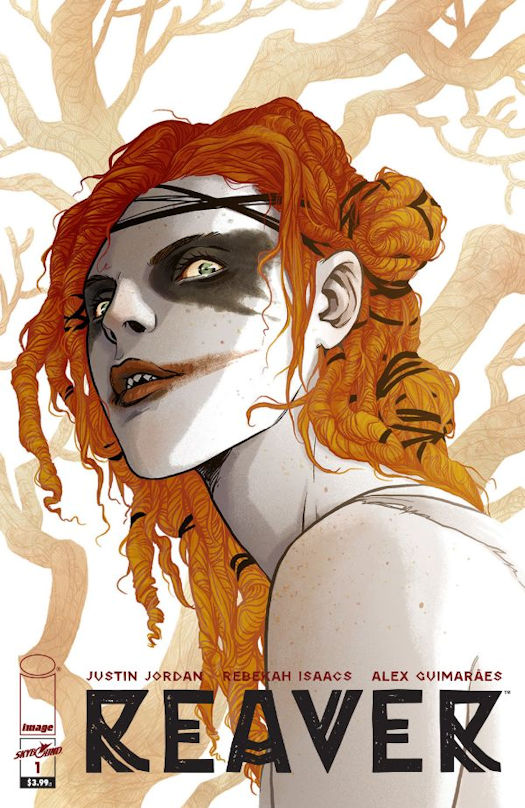 The continent of Madaras once promised a new start for settlers, but 200 years after its discovery, the war rages on. Deep within this savage and untamed land, a darkness builds that must be stopped at all costs.

To do so, the Imperials assemble six of its most despicable prisoners—a turncoat, a skin eater, a sorcerer and his bodyguard, a serial killer, and the Devil’s Son—the only ones who can stop the end of the new world. They are Hell’s Half-Dozen.

In the exclusive scoop on the series announcement, Jordan told Polygon: “If you like your fantasy grim, dark and bloody, Reaver is the book for you. I've been working on this for years, and it's finally time to see the gory baby that Rebekah and I have created.”

Isaacs told Polygon, “Working on this book was like playing the best kind of D&D campaign—the characters are crude, rude, and entirely unpredictable. They are a DM’s worst nightmare! I loved the combo of a Grindhouse feel in a high-fantasy setting. It made this blood-and-gore-lovin’ artist very happy.”

Reaver #1 by Becky Cloonan (Diamond Code MAY190027) will hit stores on Wednesday, July 10. The final order cutoff deadline for retailers is Monday, June 17.

Reaver will also be available for purchase across many digital platforms, including the official Image Comics iOS app, Amazon Kindle, Apple Books, comiXology, and Google Play.

ABOUT IMAGE COMICS
Image Comics is a comic book and graphic novel publisher founded in 1992 by a collective of bestselling artists. Image has since gone on to become one of the largest comics publishers in the United States. Image currently has six individuals on the Board of Directors: Robert Kirkman, Erik Larsen, Todd McFarlane, Marc Silvestri, Jim Valentino, and Eric Stephenson. It consists of five major houses: Todd McFarlane Productions, Top Cow Productions, Shadowline Comics, Skybound Entertainment, and Image Central. Image publishes comics and graphic novels in nearly every genre, sub-genre, and style imaginable. It offers science fiction, fantasy, romance, horror, crime fiction, historical fiction, humor and more by the finest artists and writers working in the medium today. For more information, visit www.imagecomics.com.
ABOUT SKYBOUND ENTERTAINMENT
Founded in 2010, Skybound Entertainment is a multiplatform entertainment company specializing in television, comics, film, digital content, interactive, gaming, and merchandise. The company is led by The Walking Dead creator Robert Kirkman and his longtime producing and business partner David Alpert.
Posted by Qwill at 7:28 AM