Please welcome M.G. Wheaton to The Qwillery as part of the 2019 Debut Author Challenge Interviews. Emily Eternal is published on April 23, 2019 by Grand Central 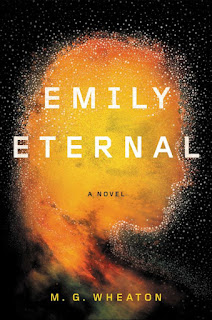 M.G.:  I was in kindergarten and wrote this series of stories about rats in France who had to flee to Morocco due to these monstrous invaders. The rats trained hard then crossed the sea and battled them back. The main rat was named Pepe le Chat (Pepe the Cat). I have no idea why I wrote it except that it was heavily illustrated, and I really liked drawing rats at the time. My mother didn’t tell me until much later in life as she thought it’d go to my head, but my parents were actually called in for a school conference over the stories as my teachers were worried about what I’d been reading at home.

M.G.:  A slight hybrid? I research whatever I’m interested in sometimes for years. When I know it’s a story, I’ll sit down and write a couple of full-length drafts to see if it holds water then go back to outline and start over completely. I think there’s the impulse when you’re starting out writing to emulate the process of successful authors but for me, one of the hardest things I’ve had to learn is what process works best for me even if it takes twice the time as someone else or is ridiculously inefficient.

TQ:  What is the most challenging thing for you about writing? How does being a screenwriter affect (or not) your novel writing?

M.G.:  The biggest challenge for me has always been to be certain what makes perfect sense in my head ends up on the page. One reason I have to write draft after draft is because I realize how much I missed or glossed over the first couple of times through. What also helps this is to have a wide number of readers who know your style and can look at drafts at different points in your process. As for screenwriting, it gets you in the habit of writing a lot of dialogue and getting in and out of scenes, something working in video games and comics forces you to do as well. But in all three media, you’re also creating something of a blueprint to be handed off to someone else responsible for the visual that’s placed in front of someone. When I started out in books, I felt freed from that. I’m in charge, now! So, I’d write and write and write, banging out bloated and unreadable 125,000-word drafts. It was like, “Because you’ve switched format you’re going to forget about viewer/player/reader experience?” I’m sure I’ve ported over several other bad habits I’ll be weeding out for some time to come!

M.G.:  I read a lot and I see mountains of theater, so books and plays/musicals the most, I think? I enjoy rich character pieces with sci-fi elements like Jennifer Haley’s play, “The Nether,” or the way the future affects the most marginalized of people in Warren Ellis’s old comic book series, “Transmetropolitan.” When I read something with a large cast of beautifully realized characters, recently books like Rachel Kushner’s “The Mars Room,” Joseph Cassera’s “House of Impossible Beauties,” or Tim Murphy’s “Christodora,” it gives me something to aim at. Also, Hideo Yokoyama. His “Six Four” and “Seventeen” are these beautiful studies in how people are with each other from clumsy to aggressive to cold to inarticulate. All things that make me want to be a better writer.

TQ:  Tell us something about Emily Eternal that is not found in the book description.

M.G.:  Part of aging is about discovering the limitations of your body, the loss of short-term memory, the aging and breakdown of cells, the depletion of finite resources. Part of Emily is a fantasy about what if that didn’t have to be true?

TQ:  What inspired you to write Emily Eternal? What appeals to you about writing Science Fiction?

M. G.:  My grandfather worked in a factory his whole life building first propeller planes during World War II then passenger jets in the eighties. While a lot is written about the development of planes is how they were designed to be faster or reach higher altitudes when just as much thought went into the safety of pilots. It’s so difficult to preserve a human body in a hostile environment which is just about anywhere not on land in a temperate environment. Everything else becomes a hostile environment for most humans very quickly except through intensive, sometimes lifelong conditioning. And like my answer to the question above, I always wondered – what if that wasn’t the case? What if we solved that and humans could exist in any environment?

TQ:  What sort of research did you do for Emily Eternal?

M.G.:  I spend a lot of time reading articles in the science and medical fields always thinking, “what if?” after reading about this development or that, so much of it comes from that kind of research. The only real on-site work I did involved a trip to Kennedy Space Center in Florida where I took the tours, looked at all the launch pads and how integrated Space X and Boeing are into NASA down there. As far as genetics go, I researched a bit on the ocean-based Sama-Bajau people whose genes have evolved in several ways to allow them to not only live on water but also under it for much longer than, say, you or me.

TQ:  Please tell us about the cover for Emily Eternal.

M.G.:  I love the cover. It was made by a London-based artist, Natalie Chen (http://www.nataliejade.co.uk/) who does a lot of covers for Hodder & Stoughton. Grand Central had been working on other covers but when they saw Ms. Chen’s work, they adapted it instead as they were as impressed as we all were. It doesn’t depict anything directly from the novel but brings together many ideas – the coming together of many to create one, a person among the cosmos, and the seeming eternity of space.

TQ:  In Emily Eternal who was the easiest character to write and why? The hardest and why?

M.G.:  Perhaps a spoiler, but the easiest character to write is Emily’s predecessor, Emily-2. If Emily is evolved to have a sort of moral compass that forces her to consider several different angles, the decisions made by Emily-2 are very binary, very yes or no. She has a task and she must complete it. Nuance isn’t important. Only quantifiable success. The hardest is probably Emily herself because she is constantly striving to be better and thoughtful in all things. I am not always such a person, so had to always imagine what that experience of life would be like.

TQ:  Does Emily Eternal touch on any social issues?

M.G.:  It does. Right now, whether it’s something one chooses to acknowledge or not, mankind is entering a precarious moment due to climate change and the impact that will have on the world’s peoples. I read recently that 1 in 110 people, 68.5 million or about .8 % of the world’s population has been displaced, the highest number in human history. These are people forcibly made refugees due to war and famine. That number is going to increase exponentially over the next half century. Those of means have made it clear that they intend to hold onto power whatever the consequences, likely leaving those without resources to fend for themselves. Emily attempts to make the point that, as a species, we need one another. Though it may sound like a cliché, “diversity is our strength” is scientifically dead on. We have evolved to where we are now. We can only guess at what effect a large-scale population die-off will have on our species.

TQ:  Which question about Emily Eternal do you wish someone would ask? Ask it and answer it!

M.G.:  Could the sun really die in 5,000 years? No idea! But maybe? What’s nuts about science is how quickly things change or evolve. I’ve only recently come to learn about the sociology of science – the study of how the social behavior of scientists – and seen how some ill-tested theories are pushed forward as “fact” due to herd mentality while others fall away or are suppressed by those within the field. Science is always seen as so iron-clad, so much the last word. But like it or not, there’s in-fighting within science, jealousy, and bitter competition. It wasn’t that long ago that much of what we agree on as “fact” was considered heretical, even by some who knew better. I often wonder which things we take for granted today in our day to day understanding of the natural world will be laughed at a couple hundred years from now.

TQ:  Give us one or two of your favorite non-spoilery quotes from Emily Eternal.

M.G.:  Okay, so three hours, 150 miles, and 8.4 gallons of fuel later, this hubristic, not-so-super-computer, not-so-wonder-woman is still coming up dry on the plan front.

(This was how I felt flipping through the book looking for something non-spoilery?)

M.G.:  After “Emily” sold, I started a horror thing, another science fiction thing, and a historical science fiction thing. The first two are both about to go to my agent as they’re pretty much done. I did two drafts of the historical one in order to write an outline so I could start over and will be doing another two months of so of research before hopping into another draft of that. 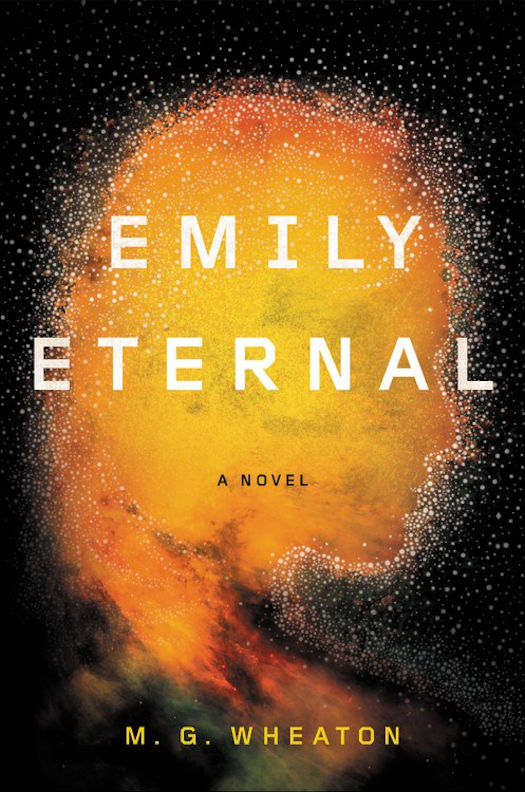 Meet Emily, “the best AI character since HAL 9000″ (Blake Crouch). She can solve advanced mathematical problems, unlock the mind’s deepest secrets, but unfortunately, even she can’t restart the sun.

Emily is an artificial consciousness, designed in a lab to help humans process trauma, which is particularly helpful when the sun begins to die 5 billion years before scientists agreed it was supposed to.

Her beloved human race is screwed, and so is Emily. That is, until she finds a potential answer buried deep in the human genome that may save them all. But not everyone is convinced Emily has the best solution–or the best intentions. Before her theory can be tested, the lab is brutally attacked, and Emily’s servers are taken hostage.

Narrowly escaping, Emily is forced to go on the run with two human companions–college student Jason and small-town Sheriff, Mayra. As the sun’s death draws near, Emily and her friends must race against time to save humanity. Soon it becomes clear not just the species is at stake, but also that which makes us most human. 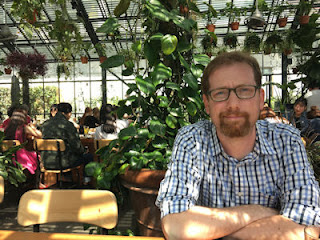 Before turning to novels, M.G. Wheaton wrote movies, comic books, and video games as well as for several movie magazines. He was born in Texas but now lives in Los Angeles.