Interview with Jenn Lyons, author of The Ruin of Kings


Please welcome Jenn Lyons to The Qwillery as part of the 2019 Debut Author Challenge Interviews. The Ruin of Kings was published on February 5, 2019 by Tor Books. 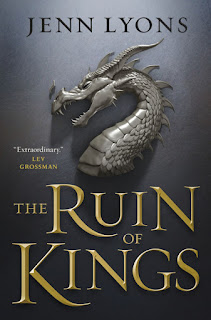 Jenn:  I wrote a short story in elementary school about an Egyptian high priestess. And I remember being annoyed because I didn’t think the story was good but my English teacher had given me an A anyway because she liked the drawing I’d handed in with it. I didn’t think that was fair.

Jenn:  A hybrid, although I lean towards plotter. I start with an outline of milestone to aim for and usually have adjusted by the time I’ve finished. The journey may not travel on quite the roads I predicted, but I end up at the right place eventually.

Jenn:  Protecting my time. As a writer, there's always people (often well-intentioned) who think that I have a tremendous amount of free time, that writing is a few hours of intense focus following by oh, just doing nothing the rest of the time. So surely I must have that time for whatever it is they want. And that's not true at all, at least it isn't for me. Typically their 'free time' is exactly when I do my best work, so if I don't studiously protect that, I end up not accomplishing much.

Jenn:  I was reminded recently what an impact years of table top role-playing has had when someone commented on how I was able to juggle so many story threads. It seems very natural to me, and I think in large part that’s because I’m used to dealing with giant campaigns stretching back years. But my writing has been influenced by so many factors. It's difficult to single out just one thing.

TQ:  Describe The Ruin of Kings using only 5 words.

TQ:  Tell us something about The Ruin of Kings that is not found in the book description.

Jenn:  It's completely diegetic, meaning the book itself 'exists' in the world the book describes. This makes the reader something of a voyeur, reading a work that wasn't intended for them. When I was a child, I remember my mother coming home with this very old photo-album of black-and-white photos of, I kid you not, the Boxer Rebellion, along with notes that the original owner, a missionary, had taken before they’d been forced to flee for their lives from China. It’s always stayed with me, that sense of subterfuge, of glimpsing someone else’s secrets.

TQ:  What inspired you to write The Ruin of Kings? What appeals to you about writing Fantasy?

Jenn:  ROK is large enough for a multitude of inspirations, but one of the subjects of table-top RPGs I've always been fascinated with is how trivial death becomes. In most games, if a character dies, the rest of the adventurers just go and ask for that character to be brought back to life. Easy. Except…what happens to a society where that kind of solution to death exists? Where an afterlife and reincarnation aren't guessed at or matters of blind faith, but known provable absolutes? My attraction to fantasy, of course, is deeply ingrained, and I suppose harkens all the way back to the fairy tales of my childhood.

It's a somewhat difficult question though, because I can't imagine not writing fantasy, or not having fantasy in my life. My reasons may have changed since I was a child using such stories to escape from the reality of my situation, but I still love the opportunity to examine scenarios impossible in a more 'realistic' setting.

TQ:  What sort of research did you do for The Ruin of Kings?

Jenn:  Oh, so much. Linguistics, geology, meteorology, metallurgy, mythologies of all sorts, historical costuming…sometimes it seems like I’ve been a dragon myself, hoarding stray scraps of information I could use for world building. I also studied fencing and learned to play the harp, although I've very much lapsed in both areas in the years since.

TQ:  Please tell us about the cover for The Ruin of Kings.

Jenn:  It depicts a dragon, and yes, the dragon exists in the story, and no, I won’t tell you which dragon it is. (That would be a spoiler.) The cover was created by Lars Grant-West, who is amazing. He does extraordinary 2D work, but he created this dragon in 3D and I couldn’t be happier.

TQ:  In The Ruin of Kings who was the easiest character to write and why? The hardest and why?

Jenn:  I would say the easiest character to write was Kihrin. I know him so well by this point it’s a bit like breathing. And conversely, Darzin and Gadrith were the hardest. Gadrith because he's so coldly logical I sometimes have remind myself that this is a man who’s completely amoral, and thus has no interest in stopping at the usual societal limits. And Darzin because...well, because Darzin is cruel and delights in causing pain. It's not easy to put myself in that headspace.

TQ:  Does The Ruin of Kings touch on any social issues?

Jenn:  As the story progressed, a discussion on consent snuck in as well. I hadn’t planned on it, but the idea planted itself pretty firmly into the foundational bedrock of the story and refused to leave. A great deal of fantasy presents questions about agency and free will but doesn't always do a good job of answering those questions. We don't think about what it really means to have an inescapable heroic destiny. After all, a great many fantasy tropes are a complete denial of the idea of free will, or imply that morality and worthiness are tied to genetics. So, this spends some time looking at that, and probably will continue to do so as the series progresses.

TQ:  Which question about The Ruin of Kings do you wish someone would ask? Ask it and answer it!

Jenn:  What did you learn about yourself while creating this book?

I have tells. Most authors do. There are certain themes that may show up again and again in an author’s work, and for me, I apparently have a deep and abiding faith in the ability of loved ones to lie to each other. Also, that nobody’s parents are going to be who they think. Probably explains why I always liked King Arthur so much as a kid.

TQ:  Give us one or two of your favorite non-spoilery quotes from The Ruin of Kings.

“When they brought me up to the auction block, I looked out over the crowd and thought: I would kill you all if I had a knife.
And if I wasn’t naked, I amended.”

“I don’t want to be your hero. Those stories never end well. The peasant boy done good slays the monster, wins the princess, and only then finds out he’s married to a stuck-up spoiled brat who thinks she’s better than him. Or he gets so wrapped up in his own majesty that he raises taxes to put up gold statues of himself while his people starve. The chosen ones—like Emperor Kandor—end up rotting and dead on the Manol Jungle floor, stuck full of vané arrows. No thanks.”

Jenn:  Next is the sequel, The Name of All Things, which will be available on October 29th (pre-orders are live now!) And of course finishing the rest of the series.

Jenn:  Thank you for having me! It’s been a real pleasure.

"Everything epic fantasy should be: rich, cruel, gorgeous, brilliant, enthralling and deeply, deeply satisfying. I loved it."—Lev Grossman, author of The Magicians

When destiny calls, there's no fighting back.

Kihrin grew up in the slums of Quur, a thief and a minstrel's son raised on tales of long-lost princes and magnificent quests. When he is claimed against his will as the missing son of a treasonous prince, Kihrin finds himself at the mercy of his new family's ruthless power plays and political ambitions.

Practically a prisoner, Kihrin discovers that being a long-lost prince is nothing like what the storybooks promised. The storybooks have lied about a lot of other things, too: dragons, demons, gods, prophecies, and how the hero always wins.

Then again, maybe he isn't the hero after all. For Kihrin is not destined to save the world.

He's destined to destroy it.

Jenn Lyons begins the Chorus of Dragons series with The Ruin of Kings, an epic fantasy novel about a man who discovers his fate is tied to the future of an empire.

"It's impossible not to be impressed with the ambition of it all . . . a larger-than-life adventure story about thieves, wizards, assassins and kings to dwell in for a good long while."—The New York Times 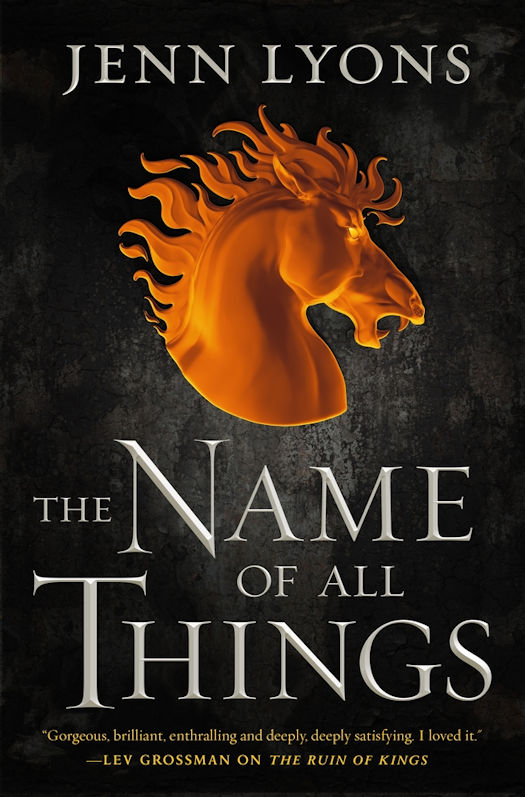 "Everything epic fantasy should be: rich, cruel, gorgeous, brilliant, enthralling and deeply, deeply satisfying. I loved it."—Lev Grossman on The Ruin of Kings

Kihrin D'Mon is a wanted man.

Since he destroyed the Stone of Shackles and set demons free across Quur, he has been on the run from the wrath of an entire empire. His attempt to escape brings him into the path of Janel Theranon, a mysterious Joratese woman who claims to know Kihrin.

Janel's plea for help pits Kihrin against all manner of dangers: a secret rebellion, a dragon capable of destroying an entire city, and Kihrin's old enemy, the wizard Relos Var.

Janel believes that Relos Var possesses one of the most powerful artifacts in the world—the Cornerstone called the Name of All Things. And if Janel is right, then there may be nothing in the world that can stop Relos Var from getting what he wants.

And what he wants is Kihrin D'Mon.

Jenn Lyons continues the Chorus of Dragons series with The Name of All Things, the epic sequel to The Ruin of Kings

Jenn Lyons lives in Atlanta, Georgia with her husband, three cats and a nearly infinite number of opinions on anything from Sumerian mythology to the correct way to make a martini. She is a video game producer by day (although currently taking a break from that to concentrate on writing epic fantasy). A long-time devotee of storytelling, she traces her geek roots back to playing first edition Dungeons & Dragons in grade school and reading her way from A to Z in the school’s library.

Her debut epic fantasy novel, The Ruin of Kings, from Tor Books, found its way into the wild on February 5, 2019. The second book, The Name of All Things, drops October 29, 2019.

Labels: 2019 DAC, 2019 DAC Interview, 2019 Debut Author Challenge, A Chorus of Dragons, The Name of All Things, The Ruin of Kings. Jenn Lyons, Tor Books
Email ThisBlogThis!Share to TwitterShare to FacebookShare to Pinterest