Interview with Helen Marshall, author of The Migration


Please welcome Helen Marshall to The Qwillery as part of the 2019 Debut Author Challenge Interviews. The Migration was published on March 5, 2019 by Random House Canada. 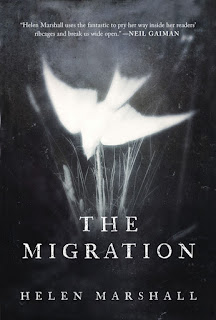 Helen:  Oooh, good question. One of my earliest finished short stories was a sort of weird fiction piece about a young woman and her love who go looking for the lost city of Atlantic off the Isle of Scilly. My favourite bit is the melodramatic final line: "Their love was deep, but the ocean was deeper."

Helen:  A natural pantser! I took some improv classes when I was in university and I've found that even though I wasn't good at acting, a lot of the theory has been very helpful for my writing. The book Impro by Keith Johnstone is brilliant and helped me enormously with figuring out how to write short stories. I've had less success pantsing my novels though, and so I tend to be something of a hybrid there. I often come up with the structure of the novel and some of the major plot elements in advance.

Helen:  Not knowing what's going to happen next. Because I'm a pantser, the details of the plot are as much a mystery to me as they are to the reader. But unlike the reader I don't have the luxury of knowing that there will be some sort of resolution at the end. In the words of Tim Gunn, I have to figure out how to "make it work."

Helen:  I read quite eclectically, wandering from science fiction and horror to non-fiction, science writing, poetry and memoir. What attracts me most to a piece of writing is a compelling voice. Well, a compelling voice and zany ideas. I love the feeling of reading something and encountering something genuinely surprising. Some of my favourite writers are Rob Shearman, Kelly Link, Georgina Bruce, Nick Harkaway and Nina Allan because all of them manage to do that.

TQ:  Tell us something about The Migration that is not found in the book description.

Helen:  Ha! That's difficult to do without spoilers. As a teaser I'll just say that it involves the image of bodies "stacked like a macabre lasagne"...

TQ:  What inspired you to write The Migration?

Helen:  To me, The Migration explores death as a transition, rather than as an end. In some ways, it began as a reworking of the motif of the zombie which I felt had been overdone in recent novels. But for me there was something intrinsically fascinating about the idea of the zombie: the loved one who returns as something changed. Although The Migration is set against the backdrop of global changes, it takes intensely personal and focused look at the way families deal with the trauma of losing a loved one, how they come to terms with their own mortality, and how they find a way to keep living in the face of tragedy.

TQ:  What sort of research did you do for The Migration?

Helen:  I did a fair bit of research in different areas to construct the central conceit of The Migration. I found Awakenings by Oliver Sacks to be particularly helpful in terms of thinking about a widespread condition with clusters of symptoms. I supplemented this with conversations with my mother, a pathologist (who kindly arranged a visit to the morgue), and fellow writer M. Huw Evans who helped me convert ideas into story. But the elements of the transformation were inspired by insect metamorphosis, which turned out to be an utterly fascinating line of research.

TQ:  In The Migration who was the easiest character to write and why? The hardest and why?

Helen:  The easiest character to write was Sophie's younger sister, Kira. She was one of the main starting points for the novel and her voice seemed the most natural. Sophie's mother was probably the most difficult character to write because her world was so claustrophobic and difficult to grapple with. It was only when I wrote the first draft of the epilogue of the novel that I felt as if I had come to a more sympathetic view of her.

TQ:  Does The Migration touch on any social issues?

Helen:  In his article, “Apocalypse: What Disasters Reveal”, Dominican writer Junot Diaz turns to the devastating earthquake which struck Haiti in 2010 in order to look at what a disaster might tell us about the world we live in. He reminds us of the Greek etymology of the word apocalypsis, meaning “to uncover or reveal.” The only value that catastrophes of this magnitude offer is that as things fall apart “they give us a chance to see the aspects of our world that we as a society seek to run from, that we hide behind veils of denials”. Importantly, he suggests that disasters provide insights into the underlying conditions which enabled the disaster in the first place so that we can change. The Migration is interested in the revelatory process of this sort of breakdown.

TQ:  Which question about The Migration do you wish someone would ask? Ask it and answer it!

Helen:  I was asked a fantastic question in a Reddit interview I gave, which was: what piece of research did you find most interesting but never use?

I read about an experiment in which a scientist ironically named Wigglesworth was searching for the process by which nymphs--the juvenile form of an insect-- entered metamorphosis. Wigglesworth beheaded two groups of nymphs at different stages of development, then used paraffin wax to join the two insect bodies together, neck to neck, so the blood could flow freely from one to the other. What he discovered was that the two insect bodies behaved as if they had been integrated into one, with different parts of the conjoined body being brought into alignment. I referenced the research obliquely in the middle of the book but I initially wanted to include a horrific dream sequence in which Sophie imagined children as the subjects of these experiments.

TQ:  Give us one or two of your favorite non-spoilery quotes from The Migration.

"On the bedside table is an old storybook we used to read together. A fragment of Kira’s favourite story floats into my mind. It described a time when the world was underwater—no land to be found anywhere, just endless ocean and endless sky. And birds—hundreds of them, thousands of them, filling up the empty space with their song. Birds like smoke, birds like weather. Among them was a lark. When her mother died, there was nowhere to bury her body. No earth, only water. And so the lark lived in grief, idly circling. Her path was a knot of sorrow. On the third day she buried her mother in the back of her head."

Helen:  I'm currently at work on two novels, neither of which follow on from The Migration. One is a bonkers tale of godlike talking tigers, stage magicians and truth and lies in politics. The other is about sentient sludge on Mars. 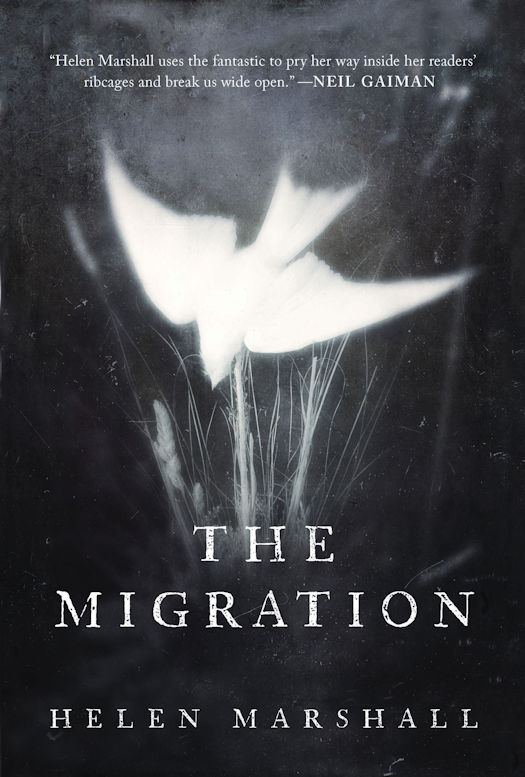 “A dark fable that somehow feels both timeless and urgently topical. The Migration is heart-wringing and powerful, but over and above that, it’s just vivid and immersive and enthralling throughout.” –M.R. Carey, author of The Girl with All the Gifts

When I was younger I didn’t know a thing about death. I thought it meant stillness, a body gone limp. A marionette with its strings cut. Death was like a long vacation–a going away. Not this.

Storms and flooding are worsening around the world, and a mysterious immune disorder has begun to afflict the young. Sophie Perella is about to begin her senior year of high school in Toronto when her little sister, Kira, is diagnosed. Their parents’ marriage falters under the strain, and Sophie’s mother takes the girls to Oxford, England, to live with their Aunt Irene. An Oxford University professor and historical epidemiologist obsessed with relics of the Black Death, Irene works with a Centre that specializes in treating people with the illness. She is a friend to Sophie, and offers a window into a strange and ancient history of human plague and recovery. Sophie just wants to understand what’s happening now; but as mortality rates climb, and reports emerge of bodily tremors in the deceased, it becomes clear there is nothing normal about this condition–and that the dead aren’t staying dead. When Kira succumbs, Sophie faces an unimaginable choice: let go of the sister she knows, or take action to embrace something terrifying and new.
Tender and chilling, unsettling and hopeful, The Migration is a story of a young woman’s dawning awareness of mortality and the power of the human heart to thrive in cataclysmic circumstances.

HELEN MARSHALL is the World Fantasy Award-winning author of two short story collections and two poetry chapbooks. Her stories and poetry have appeared in magazines and anthologies including Abyss & Apex, Lady Churchill’s Rosebud Wristlet and Tor.com. She obtained a PhD from the Centre for Medieval Studies at the University of Toronto, and then spent two years completing a postdoctoral fellowship at the University of Oxford investigating literature written during the time of the Black Death. Helen has worked as a managing editor for ChiZine Publications, and was recently hired as a permanent Lecturer in Creative Writing and Publishing at Anglia Ruskin University in Cambridge. She grew up in Sarnia, Ontario, and now resides in Cambridge. The Migration is her first novel.