Please welcome Gary Whitta to The Qwillery as part of the 2015 Debut Author Challenge Interviews. Abomination will published on July 29th by Inkshares. 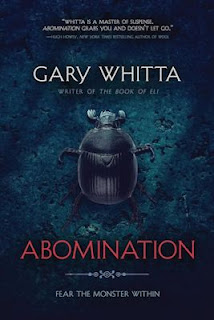 TQ:  Welcome to The Qwillery. When and why did you start writing fiction?

Gary:  Around 1989 when I was 16-17 years old. I grew up in England but was very much a product of the American sci-fi and fantasy scene, growing on Star Wars, Star Trek, Battlestar Galactica, all the greats. Writing was pretty much the only subject at school I ever had any interest in or showed much aptitude for, I’d write little short stories and comics to amuse myself. The Star Wars films and the movie Time Bandits had had a huge impact on me as a kid, sparking my imagination and my desire to try to create things like that for myself. I started writing my first movie scripts after I saw Die Hard and was inspired to write my own version of it - which, to be fair, everyone else in Hollywood was also doing at that time. My version was basically Die Hard in the future, on a spaceship, with robots. It was pretty bad.

TQ:  Are you a plotter or a pantser or hybrid? What is the most challenging thing for you about writing?

Gary:  Now I’m a hybrid, but I passed through both of those others to get there. When I was younger I was so impatient to get stuff down on the page that I’d dive in with practically no planning at all and as a result I’d inevitably write myself into corners or wind up with stories that were very flat because I hadn’t done the prep work necessary to give them dimension. So having tried both extremes I’ve wound up somewhere in between. I do outline and create other prep documents before I start actually writing, but I don’t like to write story documents that are too detailed because I find it leaves very little room for discovery in the actual writing process, which is the most fun part. All I need is a backbone, a basic throughline so I don’t lose my way, and I’ll figure out the rest as I write. With Abomination I wrote almost nothing in preparation, but it’s a really simple story and I felt like I knew the characters well enough that I could write it without having to do too much planning.

TQ:  You are screenwriter, a writer and story consultant on Telltale Games' interactive The Walking Dead adaption, as well as a writer on Lucasfilm's new generation of Star Wars projects. How does this affect or not your novel writing?

Gary:  Novel writing has been a very different experience than anything I’ve done before. My first language is screenwriting, I grew up loving film and that’s now become my day job, the form in which I am most fluent. But it’s also a very restrictive form in many ways, simply because of the realities of the movie business, your story often has to fit into a familiar, comfortable box or it’s unlikely to ever see the light of day. I got very lucky with The Book of Eli in that regard. I never ever realistically expected that film to get made, given that it’s extremely violent, deals with religious themes and breaks a lot of the traditional screenwriting “rules”. So that was very satisfying but I consider that an outlier and not something I could repeat over and over. Abomination also does a lot of things that might not seem like a great fit for a movie script so I decided to write it a novel as a way of bypassing a lot of those concerns. I could write it and know that when I was done I would have the finished product, not just the speculative blueprint for an eventual finished product, which is what a screenplay is.

Gary:  Growing up it was primarily Roald Dahl, Douglas Adams, Terry Pratchett, Spike Milligan, all the British greats. Later in life I have become a huge fan of Kurt Vonnegut, I think he’s currently tied with Douglas Adams as my all-time favorite. I actually had no idea until a few years that Vonnegut wrote so much sci-fi, and I’ve been devouring it ever since.

Gary:  It’s a mix of history and fantasy, tossing magic and monsters into the time of Alfred the Great. Kind of a medieval version of The Wolfman.

TQ:  Tell us something about Abomination that is not in the book description.

Gary:  In some ways it’s a story about family and I think the writing of it was heavily influenced by the fact that I got married and become a dad during that time. I wrote it on and off, between paying gigs, over the course of a few years, and I think you can maybe see the changes that I went through in my life in the writing. I grew up a lot.

TQ:  What inspired you to write Abomination? What appealed to you about writing Fantasy?

Gary:  I’ve always loved fantasy. Star Wars is a fantasy, just one that happens to take place in outer space. World-building is one of the most fun things we can do as writers, so the opportunity to come up with all kinds of crazy stuff from pure imagination, magic and monsters and the rules of an entire world was too good to pass up. And I think Abomination is maybe a little different from a lot of fantasy books in that it’s not set in some imaginary kingdom, but at a real time and place in history. So it was really interesting to take that real-world setting and imbue it with the fantastical. Hopefully it makes those more fantastical elements feel more grounded and real, because they’re taking place in a real historical context.

TQ:  What sort of research did you do for Abomination?

Gary:  I read a lot of stuff about the time period and learned a lot of really incredible stuff. The Dark Ages are an absolutely fascinating and in many ways terrifying period in our ancient history, you hardly need the fantasy elements to tell a great story there. I was fascinated to learn about the full extent of the Viking invasions of England during that period, how Alfred was only able to save England from total invasion by agreeing to cede vast tracts of English soil to the invaders after he had finally defeated them in battle. For a long time pretty much the entire Eastern half of England was official Viking territory. We had a map drawn up for the front of the book — actually done by the same guy who does the official Game of Thrones maps for George RR Martin — and it’s really interesting to look at because you recognize the shape of the country as England, but the way it’s divided up between the English kingdoms and the Viking “Danelaw” almost looks like something out of a fantasy story.

Gary:  I don’t know if any one character was “easier" to write than another. I think overall the one I enjoyed writing the most was Indra, the female protagonist. I think she’s a proper “strong female hero” in the sense that I believe the strongest characters are forged by weighing them down with the greatest number of flaws and weaknesses possible, and then showing how the strength of their inner character allows them to overcome them. Indra is deeply troubled in many ways. She’s angry, she’s a liar, she’s possibly doing what she’s doing for all the wrong reasons, but underneath it all there’s a very warm human soul that hopefully the story allows her to discover.

TQ:  Which question about Abomination do you wish someone would ask? Ask it and answer it!

Q: Where can I buy a copy immediately?
A: It’s available at Amazon, Inkshares, Barnes & Noble, and wherever good books are sold!

Gary:  Currently I’m working on the upcoming season of the TV series Star Wars Rebels and finishing up a feature adaptation of the Mark Miller graphic novel Starlight for 20th Century Fox. I have a comic-book coming out next year from Image Comics called Oliver, which is kind of a gnarly post-apocalyptic steampunk adaptation of Oliver Twist. 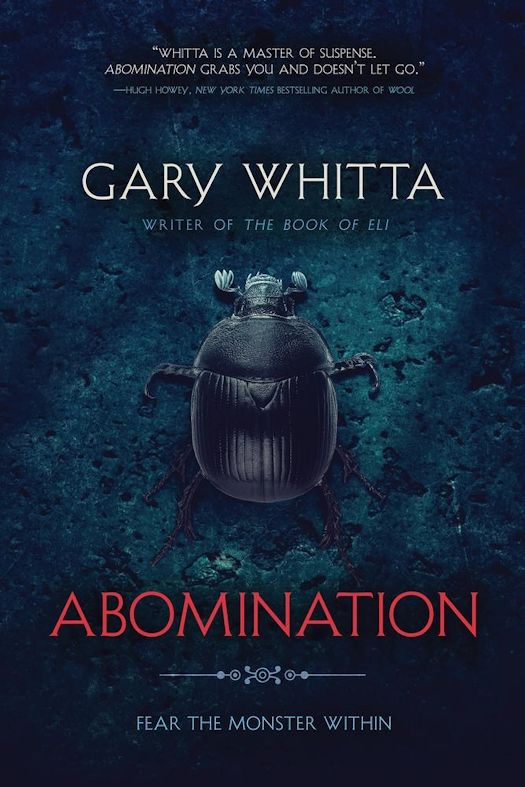 He is England's greatest knight, the man who saved the life of Alfred the Great and an entire kingdom from a Viking invasion. But when he is called back into service to combat a plague of monstrous beasts known as abominations, he meets a fate worse than death and is condemned to a life of anguish, solitude, and remorse.

She is a fierce young warrior, raised among an elite order of knights. Driven by a dark secret from her past, she defies her controlling father and sets out on a dangerous quest to do what none before her ever have―hunt down and kill an abomination, alone.

When a chance encounter sets these two against one another, an incredible twist of fate will lead them toward a salvation they never thought possible―and prove that the power of love, mercy, and forgiveness can shine a hopeful light even in history’s darkest age. 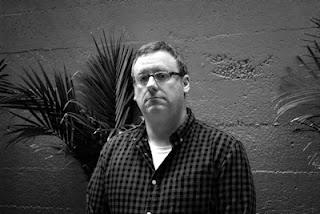 Gary Whitta's BIo: Gary Whitta is an award-winning screenwriter best known for the postapocalyptic thriller The Book of Eli. He was also a writer and story consultant on Telltale Games’ interactive adaptation of The Walking Dead, for which he was the co-recipient of a BAFTA award. Most recently he served as a writer on Lucasfilm’s new generation of Star Wars projects for film and television. Abomination is his first novel.