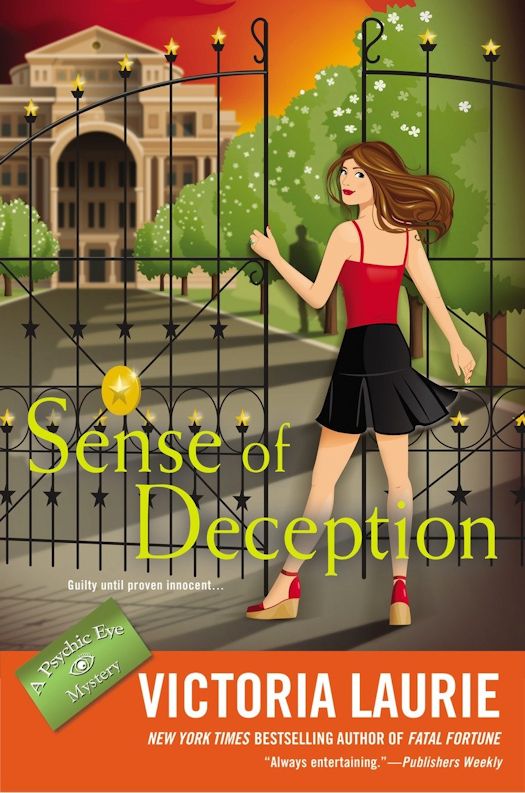 A ticked-off judge has tossed Abby in the slammer for contempt of court, and during her brief but unpleasant stay she learns the story of a condemned woman who is facing a far more serious sentence. Skylar Miller has been found guilty of murder and faces the death penalty. Everyone believes she’s guilty, including her own family and her ex-husband—everyone, that is, except Abby, whose finely honed intuition tells her this woman doesn’t belong behind bars.

With the help of her husband Dutch and her friend Candice, Abby launches into her own investigation to clear Skylar and find the real killer. But after a final appeal is denied and Skylar’s attorney scrambles for a stay of execution, time is running short—and the list of suspects keeps growing. There’s no margin for error as the life of an innocent woman hangs in the balance…

Sense of Deception is the 13th novel in Victoria Laurie’s successful Psychic Eye Mystery Series. In this installment we see Abby Cooper whisked off to jail from contempt of court after using her psychic gift to publicly humiliate a nasty federal court judge who baited her while on the witness stand. While in jail, Abby meets death row inmate Skylar Miller, who is on her last appeal for the brutal murder of her young son, Noah, a decade ago. Abby’s psychic senses convince her that Skylar is innocent, so she sets out to prove this in the short amount of time remaining before Skylar is executed.

Abby is a well established and masterfully realized character. She uses her psychic abilities in her daily life as a personal reader, private investigator, and FBI consultant. Abby commits all of herself when on a case and works well under extreme pressure. She is practical but loses her temper quickly when she is challenged, which can be detrimental, as evidenced by her courtroom outburst and arrest. Abby’s husband, Dutch, best friend and business partner, Candice, and the usual team of FBI contacts are all featured in this book. Dutch is an amazing guy; he is lovable and protective of Abby and an excellent investigator. Candice is fiery and strong and always has Abby’s back. Candice’s husband and FBI supervisor, Brice, has a smaller supportive role in this story, but still comes across as an all around great agent and friend. Bill Gaston, the Regional Director of the FBI, is very fond of Abby and respectful of her abilities, giving her a great deal of latitude in her investigations, and using his status to help her out of the sticky situation she sometimes finds herself in. Agent Oscar Rodriguez has been in a few novels in this series, but has a more prominent role in this one. Oscar, who is on a forced vacation because he hasn’t taken time off in three years, helps Abby in her quest to free Skylar. In exchange for his off the grid help, Abby has decided to help the handsome young agent to smarten up his look, along with finding him a house to replace is dilapidated apartment and help him with his love life. She, of course, uses her talent to steer him in the right directions.

Skylar Miller herself plays more of a behind the scene part in the book, Abby’s access to her being limited due to her status as a death row inmate, but she is still a compelling character that powers the story. She has a cherubic appearance but is visibly defeated by the death of her beloved son and her subsequent conviction for his heinous murder. Skylar’s venomous mother, Faith Wagner, is downright mean and completely unlikeable, which makes Skylar’s story even more tragic. Skylar’s ex-husband, who fully blames Skylar for their son’s death, is also unlikeable even in his grief. Molly Cummins is the sweet little old lady that currently lives in the house where Noah was murdered. Doreen and Ted Mulgrew, a regular older couple who knew Skylar and Noah, still live right next door to the murder scene. Ray Dioli is the hardened police detective who worked on Skylar’s case and is absolutely convinced of her guilt. Dioli is willing to work with Abby for his own ends, only allowing her access to his files if she assists him on a cold case he’s been working on, all the while expecting Abby to fail in her mission to free Skylar. We see attorney Calvin Douglas again, who helped Abby and Candice in an early book in the series. He agrees to take Skylar’s dire case as a favor to Abby. There are also various other supporting characters with connections to Skylar’s past and the case that are interesting in and of themselves.

As is typical for the Psychic Eye Series, this book is fast paced, with well timed action throughout and snappy dialogue. The author is an expert at building the tension to an exciting ending with her specialty being injecting urgency into the entire story, making the mystery all the more gripping. This is not a thriller, but a skillfully crafted mystery that keeps the reader interested and entertained from beginning to end. The subplot, which runs parallel to the main storyline, is fully integrated and complimentary, another skill that Ms. Laurie has perfected. And finally, the clever and easy banter, that has marked the relationship between Abby and Dutch throughout the series, gives the reader small, well placed respites from the action and works exceedingly well in making the story feel true to life. Sense of Deception is a wonderful addition to this series and I can truly say that I impatiently wait to discover what will come next in Abby’s world.

What:  One entrant will win a Hardcover copy of Sense of Deception by Victoria Laurie from the publisher. US ONLY

Who and When:  The contest is open to all humans on the planet earth with a US mailing address. Contest ends at 11:59PM US Eastern Time on July 29, 2015. Void where prohibited by law. No purchase necessary. You must be 18 years old or older to enter.