Please welcome Django Wexler to The Qwillery. The Price of Valor, the 3rd Shadow Campaigns novel, was published on July 7, 2015 by Roc. 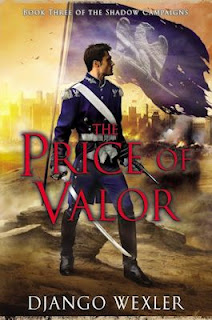 Names in fiction are hard. It's common wisdom that no two major characters in a novel should have names starting with the same letter, and some people take it farther and say no two characters should have names beginning or ending on the same phoneme. This sounds silly -- in real life we keep track of plenty of names -- but it's true. I've seen enough readers get confused between Jim and Joe and John, or Mark and Clark and Stark. On top of that, names are cultural signifiers with serious history, so picking one is essentially giving your character a complex backstory you may not fully understand.

Fantasy names are, if anything, even harder. You've got all the usual pitfalls, but now you've also got to decide what kind of names people have, what's normal and what's oddball. You can cheat, a little bit, on the backstory, since unlike real-world names there's nobody to tell you you're wrong. But that's more than made up for by the balancing act that goes on between the two poles of fantasy, which for the sake of this argument I'll call accessibility and verisimilitude.

These are basically competing demands, pulling the manuscript in opposite direction. Verisimilitude says that the fantasy world (assuming here we're speaking of secondary-world fantasy) is separate and distinct from the real world. Dealing with its languages is already hard enough [http://fantasy-faction.com/2014/the-fantasy-language-problem] -- given the astonishing range of cultures we have just here on Earth, the set of names generated by a culture that arose on another planet ought to be completely dissimilar. At the very least, they ought to be as unfamiliar to a modern English-speaker as, say, Chinese or Indian names would be.

Accessibility says, while that's great and all, the reader still needs to be able to read and understand the book. Every bit of fantastic weirdness in the language -- names, places, invented words, and so -- imposes a cost on the reader's attention that makes this more difficult, and some readers are inevitably going to decide it's not worth it. We might also point out that the language problem compromises the verisimilitude argument from the start -- the people in Fantasyland presumably don't speak English, and so if we're already translating that, why not change a few names along the way?

There isn't an obviously correct way to square this circle. Each work takes its own path, depending on the effect the author is trying to achieve. A very deep-immersion, world-building-heavy book will probably swing more towards verisimilitude, whereas books with more limited scope may favor accessibility. One factor that may tip the scales is whether the story covers a variety of cultures, or only one -- names are important cultural markers, so in stories where cultural distinctions are very important you're more likely to see invented or otherwise distinct names.

In my Shadow Campaigns series, I take something of a middle road, using a particular trick whose origins I have now forgotten. The idea is that through the familiarity of names to the reader (here assumed to be a typical English-speaking US/UK type, although this assumption is obviously faulty!) can convey something about the familiarity of names to the characters. Since the main characters of my story are all from the country of Vordan, Vordanai names have a strong Anglo/French flavor to them, with a few bits of Latin. These names are, or at least sound, similar to names that many readers think of as common and familiar. The father from Vordan a place is culturally, the more inventive and "fantasy" the names sound -- so Vordan's neighbors have German- or Russian-sounding names, whereas truly distant countries have place names like "Ashe-Katarion".

It's a little ugly (and problematic for translations or otherwise non-Anglophone readers) but all solutions to ugly problems are, to some extent. The key is to give the flavor to the extent the story requires, without burdening the reader with so much extra baggage and world-building that they throw it all to the floor in disgust. And it's only one way to do it -- there are others, probably as many as there are authors.

That's all a bit vague, so let me close with a couple of hard and fast rules about what not to do. First, don't just grab names wholesale from a culture that sounds "exotic" to you, especially if you don't know very much about it. Chances are those people will not be amused. Second, seriously, just cool it with the apostrophes! Jak'thun'dar'orgosh is a mouthful for anybody. 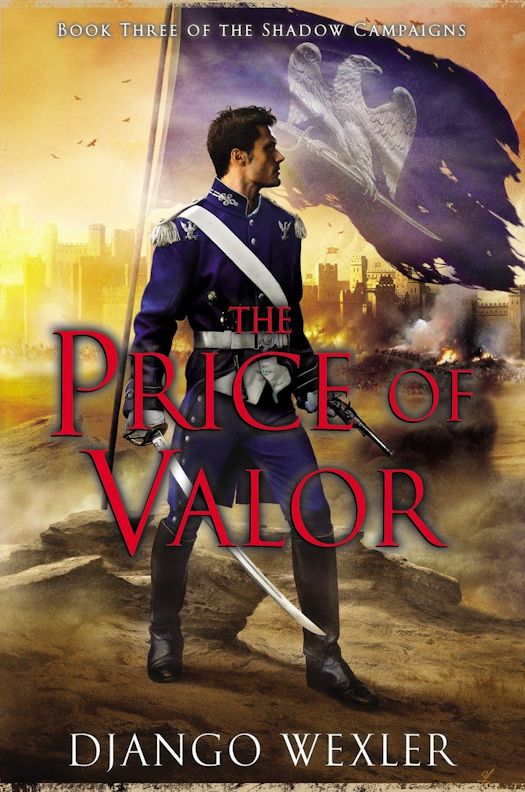 In the latest Shadow Campaigns novel, Django Wexler continues his “epic fantasy of military might and magical conflict”* following The Shadow Throne and The Thousand Names, as the realm of Vordan faces imminent threats from without and within.

In the wake of the King’s death, war has come to Vordan.

The Deputies-General has precarious control of the city, but it is led by a zealot who sees traitors in every shadow. Executions have become a grim public spectacle. The new queen, Raesinia Orboan, finds herself nearly powerless as the government tightens its grip and assassins threaten her life. But she did not help free the country from one sort of tyranny to see it fall into another. Placing her trust with the steadfast soldier Marcus D’Ivoire, she sets out to turn the tide of history.

As the hidden hand of the Sworn Church brings all the powers of the continent to war against Vordan, the enigmatic and brilliant general Janus bet Vhalnich offers a path to victory. Winter Ihernglass, newly promoted to command a regiment, has reunited with her lover and her friends, only to face the prospect of leading them into bloody battle.

And the enemy is not just armed with muskets and cannon. Dark priests of an ancient order, wielding forbidden magic, have infiltrated Vordan to stop Janus by whatever means necessary… 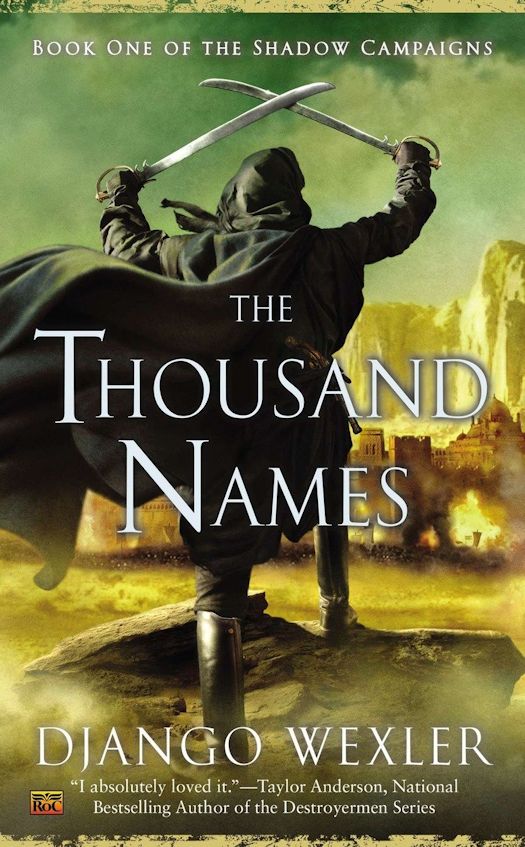 Captain Marcus d’Ivoire, commander of one of the Vordanai empire’s colonial garrisons, was serving out his days in a sleepy, remote outpost—until a rebellion left him in charge of a demoralized force clinging to a small fortress at the edge of the desert.

To flee from her past, Winter Ihernglass masqueraded as a man and enlisted as a ranker in the Vordanai Colonials, hoping only to avoid notice. But when chance sees her promoted to command, she must lead her men into battle against impossible odds.

Their fate depends on Colonel Janus bet Vhalnich. Under his command, Marcus and Winter feel the tide turning and their allegiance being tested. For Janus’s ambitions extend beyond the battlefield and into the realm of the supernatural—a realm with the power to reshape the known world and change the lives of everyone in its path. 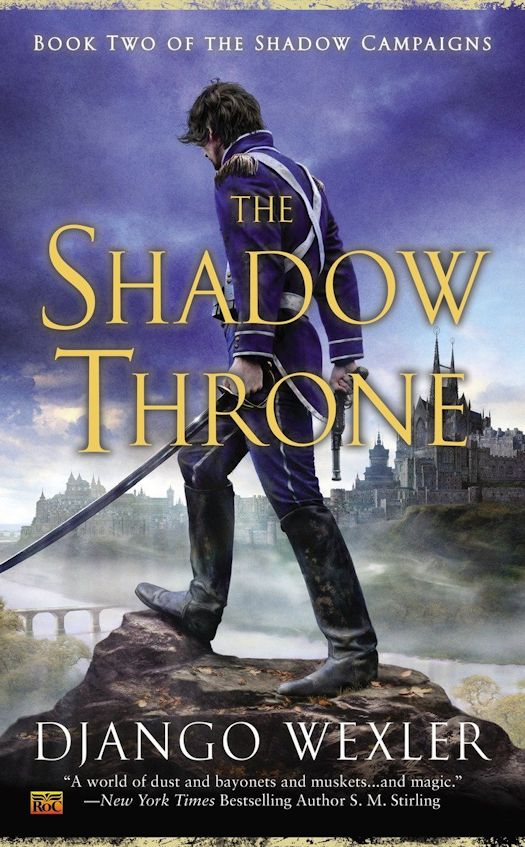 “An immensely entertaining novel” (Tor.com) from the author of The Thousand Names…

The King of the Vordan is on his deathbed. Soon his daughter, Raesinia will be the first Queen Regnant in centuries—and a target for those who seek to control her. The most dangerous is Duke Orlanko, Minister of Information, and master of the secret police. He is the most feared man in the kingdom, and he knows an arcane secret that puts Raesinia completely at his mercy.

But Raesinia has found unlikely allies in the returning war hero Janus bet Vhalnich, and his loyal deputies, Captain Marcus d’Ivoire and Lieutenant Winter Ihernglass. As Marcus and Winter struggle to find their places in the home they never thought they would see again, they help Janus and Raesinia set in motion events that could shatter Orlanko’s powers, but perhaps at the price of throwing the nation into chaos. But with the people suffering under the Duke’s tyranny, they intend to protect the kingdom with every power they can command, earthly or otherwise.


The Shadow of Elysium
A Shadow Campaigns Novella
Intermix, May 19, 2015
eBook 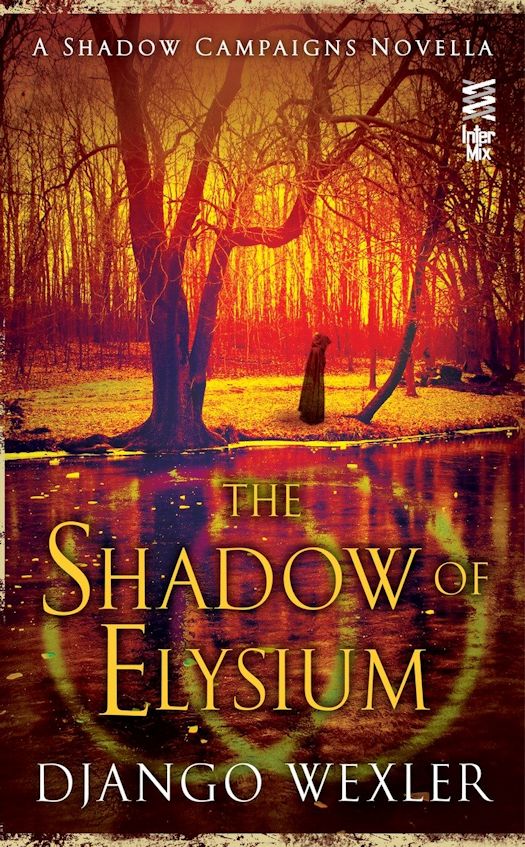 From the author of The Price of Valor, The Shadow Throne, and The Thousand Names comes a new novella set in the world of the Shadow Campaigns—”a world of dust and bayonets and muskets…and magic.”*

The wagons travel north across the mountains, carrying cargo of great value: Hamveltai glass and porcelain; Deslandai jewelry in heavy iron strongboxes; fine cloth from the cities of the Old Coast. And Abraham.

Bound and tied, guarded day and night, Abraham has been stolen from his village, from the arms of the man he loved. He is being sent to the fortress-city of Elysium to serve a dark and ancient order, the Priests of the Black. They have discovered the secret he kept all his life: that inside him dwells a demon which allows him to heal…and to kill.

But Abraham is not alone. A young woman named Alex, similarly possessed, rides with him. And as a bond grows between them, they begin to wonder if they can turn the demons that have damned them into their salvation.

Django Wexler graduated Carnegie Mellon University in Pittsburgh with degrees in creative writing and computer science, and worked for the university in artificial intelligence research. Eventually he migrated to Microsoft and Seattle, where he now lives with two cats and a teetering mountain of books. When not planning Shadow Campaigns, he wrangles computers, paints tiny soldiers, and plays games of all sorts.