Review and Giveaway: Hooked on Ewe by Hannah Reed 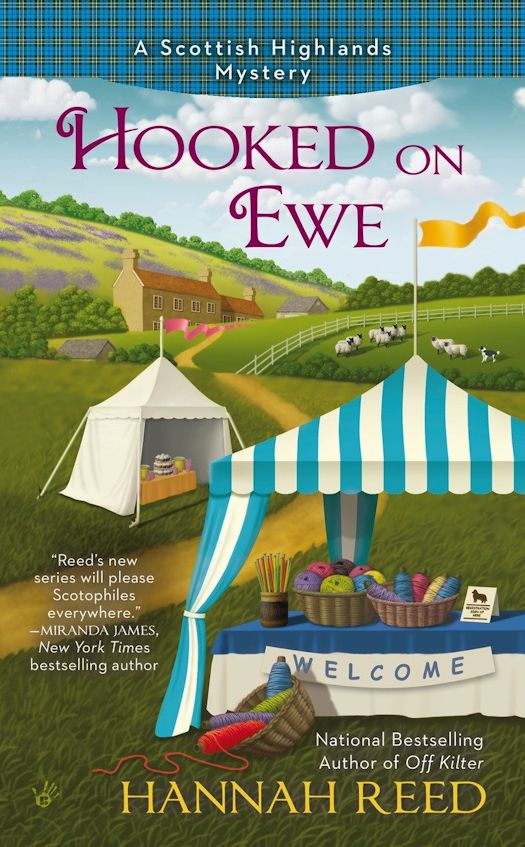 It’s early September in Glenkillen, Scotland, when American expat (and budding romance novelist) Eden Elliott is recruited by the local inspector to act as a special constable. Fortunately it’s in name only, since not much happens in Glenkillen.

For now Eden has her hands full with other things: preparing for the sheepdog trial on the MacBride farm—a fundraiser for the local hospice—and helping her friend Vicki with her first yarn club skein-of-the-month deliveries. Everything seems to be coming together—until the head of the welcoming committee is found strangled to death with a club member’s yarn.

Now Eden feels compelled to honor her commitment as constable and herd together the clues, figure out which ones are dogs, and which ones will lead to a ruthless killer . . .

The second installment in Hannah Reed’s Scottish Highlands Mystery Series is entitled Hooked on Ewe and again follows budding romance author, Eden Elliott, as she continues her six month sojourn in Glenkillen, Scotland, gathering material for her steamy Scottish romance series. Eden loves the quaint village she has been staying in, making friends and drinking in the landscape and local color. She is surprised and gratified when, while working at a town fundraiser for a local hospice, she is asked to become a special constable by the local police inspector, Kevin Jamieson, a volunteer job that is intended to be in name only. Unfortunately, the job becomes more real when Eden discovers the body of the head of the festival’s welcoming committee, the irascible Isla Lindsey, murdered in another volunteer’s van. The murder weapon, a length of scarlet yarn made by her dear friend Vicki MacBride, that was left tied neatly around the victim’s neck, causes Eden to earnestly search for a dangerous killer.

Eden is obviously smitten with Glenkillen and its eccentric and varied residents, clearly thinking of staying, but knowing that would be difficult because her extended visa is expiring soon. She is still charmingly inept at the Scottish vernacular, but, with her innate warmth and openness, has made friends and is enjoying her stay. Eden can be a bit prideful and headstrong, along with her more pleasant qualities, but she is also sharp as a tack and observant, which makes her good choice for the inspector when he finds himself in need of a special constable. Jamieson, a brilliant detective but reticent man, prefers to work alone, but must have an assistant due to regulations. He is a handsome widower who could very easily be turned into a love interest for Eden. When Jamieson's rather bumbling but well meaning current constable, Sean Stevens, is accepted into the police academy, Jamieson is thrilled, and hopes that the busy romance American romance writer will be less of a nuisance than Sean. His hopes are definitely not realized. With Ilsa’s murder hitting so close to her friend, Eden is determined to do her duty and catch the killer, even if it means putting herself in danger and going against Jamieson's orders.

There are a myriad of supporting characters in the form of townspeople featured in the first novel of the series, who are fleshed out more in this book, and new characters introduced over the course of the mystery. Eden met Vicki, a high energy, talkative American transplant on the flight over to Scotland and now stays in a small cottage on the sheep farm Vicki inherited from her father. Kristine Derry is Vicki's cantankerous half-sister who runs the shop on the sheep farm, and John is her taciturn husband who manages the farm itself. Neither are thrilled to have Vicki back in Scotland and Kristine especially has a grudge against Eden for some perceived slight. Dale and Marge, who own Eden's favorite writing spot, the Kilt and Thistle Pub, are a happily married couple who are kind and hardworking. Bill Morris is the town drunk who has a fairly permanent spot at the pub, where he is rarely coherent. Charlotte Penn is a practical local who travels the countryside providing sheep shearing services to the various sheep farmers. Leith Cameron, a neighbor who runs a fishing and adventure business for tourists is robustly handsome and cheerful. Eden has based her romantic hero on Leith and often wonders if their new friendship could morph into something more intimate.

The list of suspects for the murder is a mile long, including anyone present at the festival, but especially those who received at knitting kit from Vicki, containing the hand spun scarlet yarn that was used to strangle the domineering Isla. Topping the list are Isla's long suffering, browbeaten husband Bryan and his sister Andrea, a mousy nurse who dotes on her loving brother. Other plausible suspects include Harry Taggart, the head of the hospice that benefited from the festival, who was also Isla's boss and a good friend of Bryan, and Oliver Wallace, a meek town resident who served on the festival's welcoming committee under Isla. Lily Young, a lifelong rival of Isla's who also worked at the hospice and served on the welcoming committee and Senga Hill, the retiree who was recently fired by Isla as an accountant for the hospice could also have committed the crime.

The mystery flows naturally, with hints and clues dropped throughout the story, ending with a satisfying action scene involving the killer and Eden in a life and death struggle. All of the characters have depth and realism and each one makes sense to the story, creating a lovely portrait of a small town in Scotland. With the solid foundation of the first two novels, this series could go far and, with the twist of a little romance thrown in one the side and the intricacies of the townsfolk explored even further, Glenkillen could become the Cabot Cove and Eden the Jessica Fletcher of Scotland.

What:  One entrant will win a Hardcover copy of Hooked on Ewe by Hannah Reed from the publisher. US ONLY

Who and When:  The contest is open to all humans on the planet earth with a US mailing address. Contest ends at 11:59PM US Eastern Time on August 3, 2015. Void where prohibited by law. No purchase necessary. You must be 18 years old or older to enter. 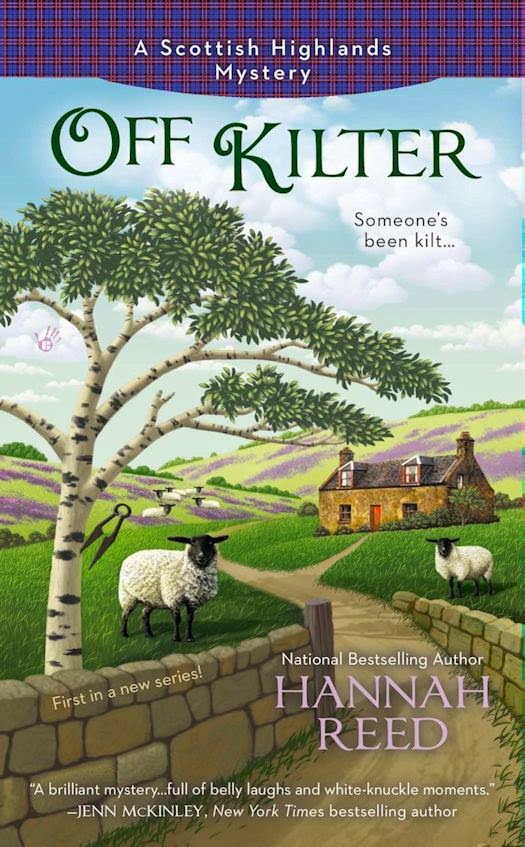 National bestselling author Hannah Reed brings mystery lovers the first in a brand-new series, in which a young writer finds herself swept up in a murder amidst the glens and lochs of the Scottish Highlands…

After the recent death of her mother and the dissolution of her marriage, thirty-something Eden Elliott is seriously in need of a fresh start. At the urging of her best friend, bestselling author Ami Pederson, Eden decides to embark on an open-ended trip to the picturesque village of Glenkillen in the Scottish Highlands, to do some hands-on research for a book of her own. But almost as soon as Eden arrives in the quaint town, she gets caught up in a very real drama…

The town’s sheep shearer is found murdered—clipped with his own shears—and the locals suspect Vicki MacBride, an outsider whose father’s recent death left her the surprise heir to his lucrative sheep farm. Eden refuses to believe the affable heiress is a murderer, but can she prove that someone is out to frame her new friend before she finds herself on the receiving end of more shear terror?