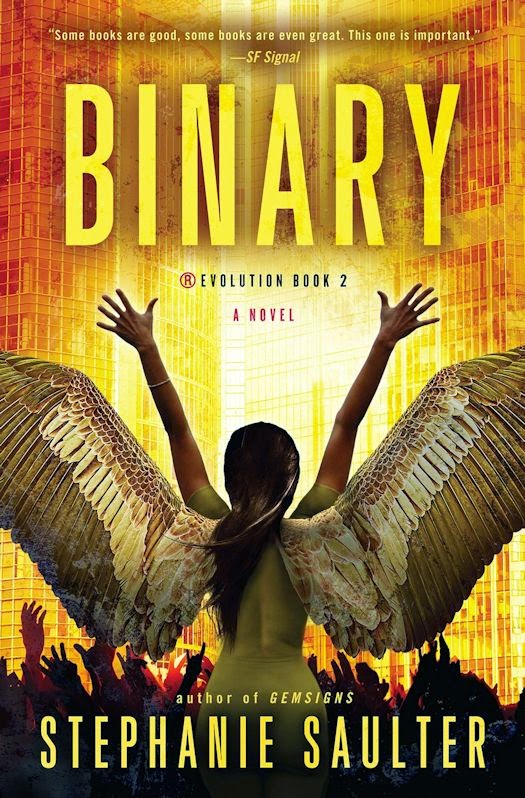 Zavcka Klist has reinvented herself: no longer the ruthless gemtech enforcer determined to keep the gems they created enslaved, she's now all about transparency and sharing the fruits of Bel'Natur's research to help gems and norms alike.

Neither Aryel Morningstar nor Dr. Eli Walker are convinced that Klist or Bel'Natur can have changed so dramatically, but the gems have problems that only a gemtech can solve. In exchange for their help, digital savant Herran agrees to work on Klist's latest project: reviving the science that drove mankind to the brink of extinction.

Then confiscated genestock disappears from a secure government facility, and the more DI Varsi investigates, the closer she comes to the dark heart of Bel'Natur and what Zavcka Klist is really after-not to mention the secrets of Aryel Morningstar's own past...

Binary, the second book of the ®EVOLUTION series by Stephanie Saulter, starts several years after book 1 with the norms and the gems living together in more harmony and the gemtechs a mere shadow of their former selves. Everything seems too happy until some gemstock is stolen from a super secure government building and DI Sharon Varsi, a norm now married to gem, is sent to investigate. While the investigation unfolds the savant Herran is asked to work for the former baddy Zavcka Klist. What seems like two very separate plots combined with secrets from Ayrel Morningstar's past all culminate in one fantastic read.

I reviewed Gemsigns back in May 2014 and it later became one of my favourite books of the 2014. I was not disappointed with Binary (with the added bonus that in the UK it was released much earlier). Saulter introduced us to very few new characters but likewise did not bring back that many of the main characters from Binary. This really worked as all the sub-plots revolved around the beautiful and wise Gem leader Ayrel Morningstar.  We get to see a glimpse into her past through a series of flashbacks and see how her past has shaped his future self as she faces off with the former gemtech kingpin Zavcka Klist.

I was a bit dubious that I was going to enjoy this book as much as I liked Gemsigns but Saulter did it. She managed to weave a story that flitted from the past to present with ease and drew the reader in so deeply that it was almost impossible to put this book down. While I missed some of the characters I had grown to love in the previous book I was just as happy to spend time getting to know new ones. The book still focused on Aryl Morningstar who is a compelling protagonist and the flashbacks make her even more so. Kavcka was equally interesting and nothing is better than a baddy who isn't overtly sinister. Saulter writes truly believable science fiction and I almost feel smarter from having read it. I can hardly wait to find out what happens next.