Excerpt: The Book of Life by Deborah Harkness and Giveaway!


To celebrate the upcoming publication of The Book of Life by Deborah Harkness in Trade Paperback and the All Souls Trilogy Boxed Set on May 26th, we've got an excerpt and a giveaway! Please note that there are SPOILERS in this excerpt which is below The Book of Life cover and information. Scroll to the giveaway at the bottom to avoid SPOILERS in the excerpt. 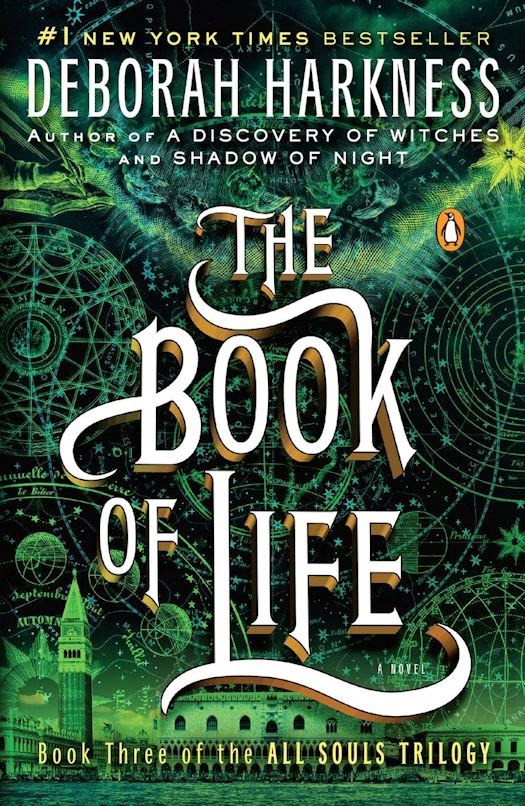 Fans of the All Souls Trilogy sent this highly anticipated finale straight to #1 on the New York Times hardcover bestseller list. Bringing the series’ magic and suspense to a deeply satisfying conclusion, The Book of Life is poised to become an even bigger phenomenon in paperback.

Diana and Matthew time-travel back from Elizabethan London to make a dramatic return to the present—facing new crises and old enemies. At Matthew’s ancestral home, Sept-Tours, they reunite with the beloved cast of characters from A Discovery of Witches—with one significant exception. But the real threat to their future has yet to be revealed, and when it is, the search for Ashmole 782 and its missing pages takes on even more urgency.


THE BOOK OF LIFE by Deborah Harkness

Ghosts didn’t have much substance. All they were composed of was memories and heart. Atop one of Sept-Tours’ round towers, Emily Mather pressed a diaphanous hand against the spot in the center of her chest that even now was heavy with dread.
Does it ever get easier? Her voice, like the rest of her, was almost imperceptible. The watching? The waiting? The knowing?
Not that I’ve noticed, Philippe de Clermont replied shortly. He was perched nearby, studying his own transparent fingers. Of all the things Philippe disliked about being dead—the inability to touch his wife, Ysabeau; his lack of smell or taste; the fact that he had no muscles for a good sparring match—invisibility topped the list. It was a constant reminder of how inconsequential he had become.
Emily’s face fell, and Philippe silently cursed himself. Since she’d died, the witch had been his constant companion, cutting his loneliness in two. What was he thinking, barking at her as if she were a servant?
Perhaps it will be easier when they don’t need us anymore, Philippe said in a gentler tone. He might be the more experienced ghost, but it was Emily who understood the metaphysics of their situation. What the witch had told him went against everything Philippe believed about the afterworld. He thought the living saw the dead because they needed something from them: assistance, forgiveness, retribution. Emily insisted these were nothing more than human myths, and it was only when the living moved on and let go that the dead could appear to them.
This information made Ysabeau’s failure to notice him somewhat easier to bear, but not much.
“I can’t wait to see Em’s reaction. She’s going to be so surprised.” Diana’s warm alto floated up to the battlements.
Diana and Matthew, Emily and Philippe said in unison, peering down to the cobbled courtyard that surrounded the château.
There, Philippe said, pointing at the drive. Even dead, he had vampire sight that was sharper than any human’s. He was also still handsomer than any man had a right to be, with his broad shoulders and devilish grin. He turned the latter on Emily, who couldn’t help grinning back. They are a fine couple, are they not? Look how much my son has changed.
Vampires weren’t supposed to be altered by the passing of time, and therefore Emily expected to see the same black hair, so dark it glinted blue; the same mutable gray-green eyes, cool and remote as a winter sea; the same pale skin and wide mouth. There were a few subtle differences, though, as Philippe suggested. Matthew’s hair was shorter, and he had a beard that made him look even more dangerous, like a pirate. She gasped.
Is Matthew . . . bigger?
He is. I fattened him up when he and Diana were here in 1590. Books were making him soft. Matthew needed to fight more and read less. Philippe had always contended there was such a thing as too much education. Matthew was living proof of it.
Diana looks different, too. More like her mother, with that long, coppery hair, Em said, acknowledging the most obvious change in her niece.
Diana stumbled on a cobblestone, and Matthew’s hand shot out to steady her. Once, Emily had seen Matthew’s incessant hovering as a sign of vampire overprotectiveness. Now, with the perspicacity of a ghost, she realized that this tendency stemmed from his preternatural awareness of every change in Diana’s expression, every shift of mood, every sign of fatigue or hunger. Today, however, Matthew’s concern seemed even more focused and acute.
It’s not just Diana’s hair that has changed. Philippe’s face had a look of wonder. Diana is with child—Matthew’s child.
Emily examined her niece more carefully, using the enhanced grasp of truth that death afforded. Philippe was right—in part. You mean “with children.” Diana is having twins.
Twins, Philippe said in an awed voice. He looked away, distracted by the appearance of his wife. Look, here are Ysabeau and Sarah with Sophie and Margaret.
What will happen now, Philippe? Emily asked, her heart growing heavier with anticipation.
Endings. Beginnings, Philippe said with deliberate vagueness. Change.
Diana has never liked change, Emily said.
That is because Diana is afraid of what she must become, Philippe replied.

Marcus Whitmore had faced horrors aplenty since the night in 1781 when Matthew de Clermont made him a vampire. None had prepared him for today’s ordeal: telling Diana Bishop that her beloved aunt, Emily Mather, was dead.
Marcus had received the phone call from Ysabeau while he and Nathaniel Wilson were watching the television news in the family library. Sophie, Na- thaniel’s wife, and their baby, Margaret, were dozing on a nearby sofa.
“The temple,” Ysabeau had said breathlessly, her tone frantic. “Come. At once.”
Marcus had obeyed his grandmother without question, only taking time to shout for his cousin, Gallowglass, and his Aunt Verin on his way out the door.
The summer half-light of evening had lightened further as he approached the clearing at the top of the mountain, brightened by the otherworldly power that Marcus glimpsed through the trees. His hair stood at attention at the magic in the air.
Then he scented the presence of a vampire, Gerbert of Aurillac. And someone else—a witch.
A light, purposeful step sounded down the stone corridor, drawing Marcus out of the past and back into the present. The heavy door opened, creaking as it always did. 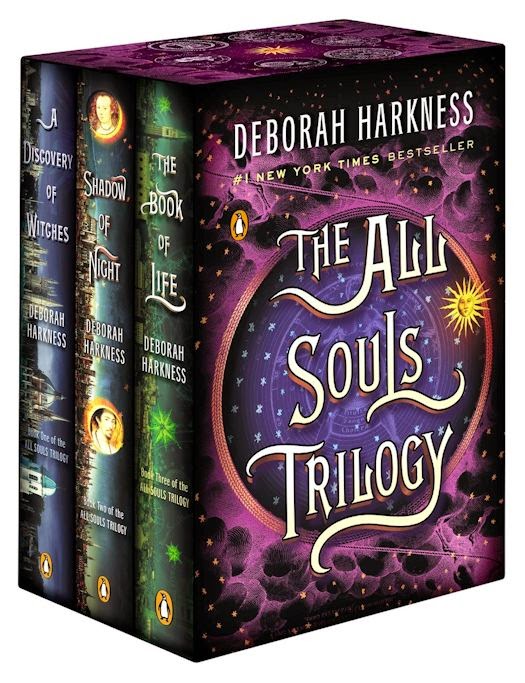 A Discovery of Witches, Shadow of Night, and The Book of Life, now available in a beautiful boxed set

With more than two million copies sold in the United States, the novels of the number one New York Times–bestselling All Souls Trilogy have landed on all the major bestseller lists, garnered rave reviews, and spellbound legions of loyal fans. Now all three novels are available in an elegantly designed boxed set that’s perfect for fans and newcomers alike.

Deborah Harkness is the number one New York Times bestselling author of A Discovery of Witches, Shadow of Night, and The Book of Life. A history professor at the University of Southern California, Harkness has received Fulbright, Guggenheim, and National Humanities Center fellowships. Her publications include works on the history of science, magic, and alchemy. Her most recent scholarly book is The Jewel House: Elizabethan London and the Scientific Revolution. She lives in Los Angeles.

What:  One entrant will win 1) A signed copy of Diana’s Commonplace Book;  2) A Trade Paperback copy of THE BOOK OF LIFE; 3) A small BOOK OF LIFE mirror with ouroboros design; and 4) All Souls alchemical buttons (six different designs) from the Publisher. US ONLY 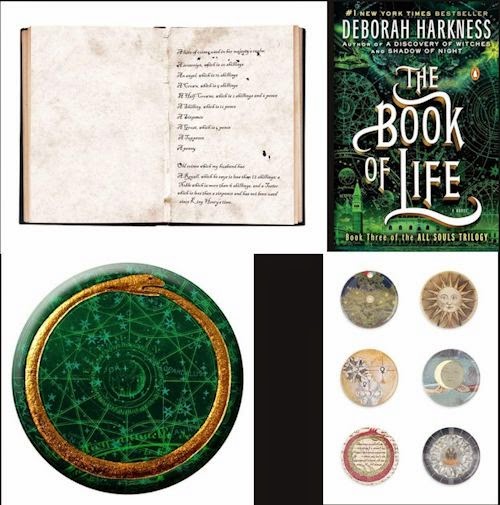 Who and When:  The contest is open to all humans on the planet earth with a US mailing address. Contest ends at 11:59 PM US Eastern Time on May 29, 2015. Void where prohibited by law. No purchase necessary. You must be 18 years old or older to enter.