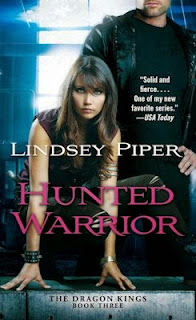 Lindsey:  A contested ruler and a woman who's never been free chase prophecies and dragons.

TQ:  Please tell us something about Hunted Warrior that we won't find in the book description.

Lindsey:  Nikolaj Coster-Waldau featured quite strongly in the inspiration for Malnefoley a man who’s trying to drag his dying culture into the future and who’s wants to be a better man, but who’s pretty sure he’s failing.

TQ:  What sorts of research did you do for Hunted Warrior?

Lindsey:  I got to do incredibly wide ranging research! Everything from the crypts beneath Paris all the way to ruins in Greece. What can I say, Malnefoley and Pet have a big mission to undertake.

TQ:  Which question about Hunted Warrior do you wish someone would ask? Ask it and answer it!

Lindsey:  “Was it awesome giving your heroine the ability to see the future?”

No! It was hard! I had a ridiculously hard time trying to figure out how to make it make sense. Pet’s gifts were a seriously important part of the plot—but if I screwed something up, I could have ended up spoiling my own book!

TQ:  Give us one or two of your favorite non-spoilery lines from Hunted Warrior.

Lindsey:  I know this one is a little long, but I do so love this paragraph.


“Pet was straddling his torso. She lowered her arms so that his hands lay inert on the rocky earth. She was wild, with her pinned-up hair in static spikes and her eyes full of daring. And triumph.
She leaned down and kissed him. An errant spark renewed between their skin, with slippery wetness to soothe the melding of flesh against flesh. The kiss itself was anything but soothing. The strong, sure push of their mouths turned everything unnatural . . . natural.”

This one is sooooo close to spoiler…or is it? *evil grin* “She broke free of comforting hands and stared up where, she hoped, a glittering dragon circled far overhead. “

TQ:  The Dragon Kings series is Paranormal Romance (PNR). Do you believe that a PNR novel must have an HEA?

Lindsey:  Personally, I think it needs an HFN – happy for now – at the least. Otherwise aren’t you in Urban Fiction land? And don’t get me wrong, I love some urban fiction, but it’s not where I turn when I want the happy feeling that romance gives me.

TQ:  In the series so far, which character has surprised you the most? Which character is your favorite? (We won't tell the other characters.)

Lindsey:  Pet has both surprised me and turned into my favorite. When she first showed up in Caged Warrior, curled around the evil doctor and doing his bidding, I had no idea that I’d end up writing Hunted Warrior about her. But she started whispering in my ear about where she’d come from—and the secrets she kept. There was no getting away from her then.

Lindsey:  BIND, by my Katie Porter name, is coming out in audiobook! Bind is about sexy dark-ops Colonel Nicky Stafford who runs a top secret unit called Command Force Alpha. Astrid, his financial whiz, tracks dirty money to a ropes conference – and they go undercover together. With ropes. And kink.

Lindsey:  Thanks for having me! 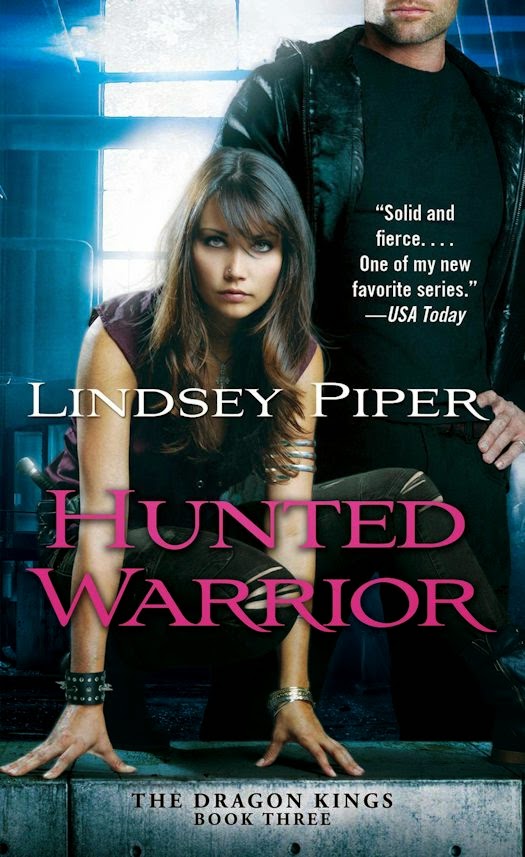 Demonic gladiators, ruthless mafia villains, and a race on the brink of distinction: What will become of them? One proud leader wields his power to unlock dark mysteries in the third book in this fierce, sensual new paranormal romance series.

When the head of the Five Clans of the Dragon Kings wants something, he gets it. Raised among the most privileged of his dying race, Malnefoley conceals a devastating tragedy from his youth. Now, many call him the Usurper because of his unconventional rise to power. His influence is waning while the Dragon Kings must solve the puzzle of their slow extinction. So when a particularly important captive escapes his compound in the Greek mountains, Malnefoley leaves nothing to chance. She is his prisoner to retrieve.

The woman is known as the Pet, a former associate of a sadistic doctor from the Asters, a human crime cartel. Her loyalties cannot be trusted, even when she claims to hold the secret to conception—an invaluable secret for a race unable to procreate. Neither can her unique gift from the Great Dragon be believed. She’s a soothsayer, able to see glimpses of the future. Her quest is to find and save a Cage warrior on the verge of her first match—a young woman whose destiny is bound to a timeless prophecy.

Malnefoley has no respect for the ancient superstitions that brought about his childhood trauma. His only goal is to return the Pet to his compound and use her knowledge for the betterment of their people. Yet her restless energy and raw sensuality are as intriguing as her predictions about the rise of the Great Dragon. He dares not trust the crafty fugitive’s loyalties, but as their treacherous chase turns passionate, can he even trust himself?

What:  One entrant will win a Mass Market Paperback copy of Hunted Warrior by Lindsey Piper. US/CANADA ONLY

Who and When:  The contest is open to all humans on the planet earth with a US or Canadian mailing address. Contest ends at 11:59 PM US Eastern Time May 27, 2015. Void where prohibited by law. No purchase necessary. You must be 18 years old or older to enter. 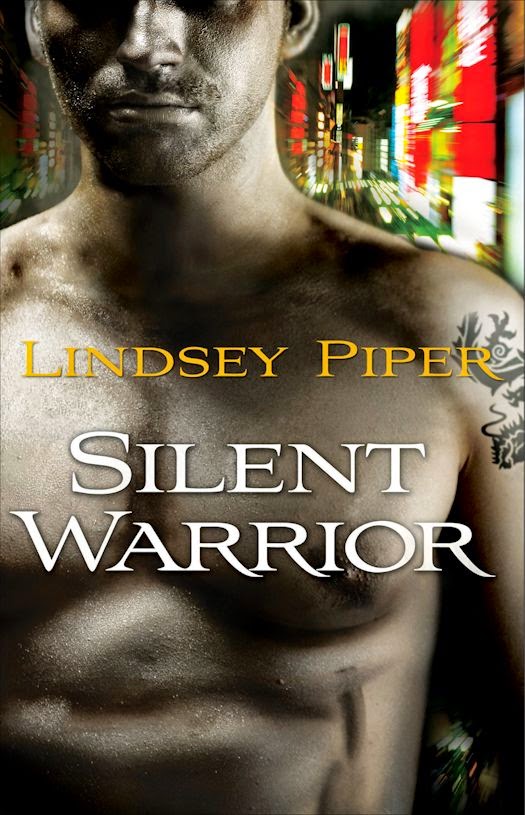 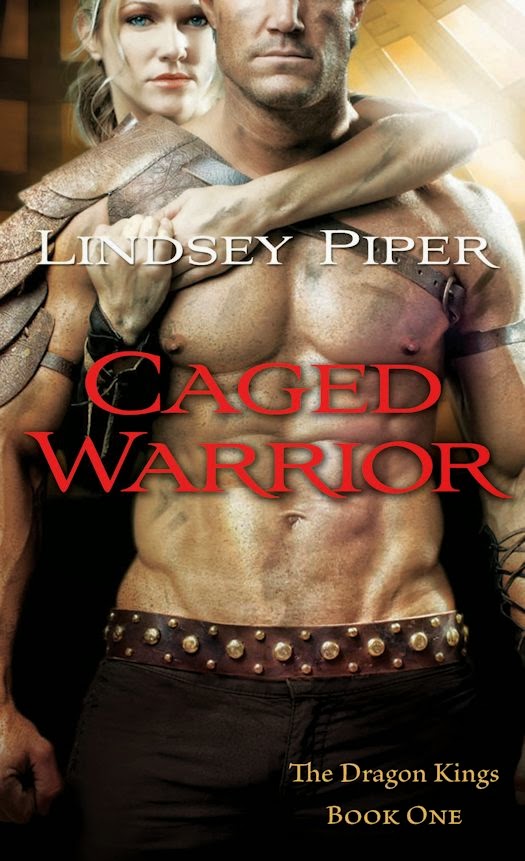 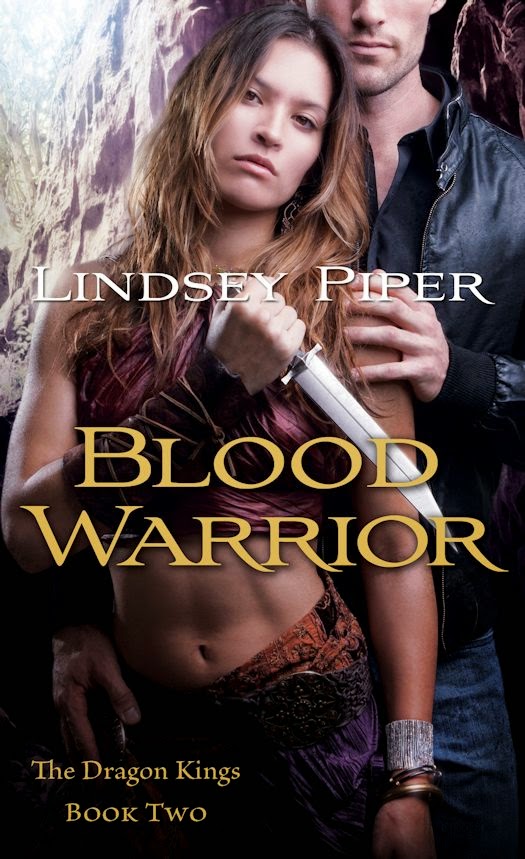