Interview with Steve Bein, author of Daughter of the Sword - October 2, 2012

Please welcome Steve Bein to The Qwillery as part of the 2012 Debut Author Challenge Interviews. Daughter of the Sword (The Fated Blades 1) is published today, October 2, 2012. Happy Publication Day to Steve!

You may read Steve's Guest Blog - Why Swords - here. 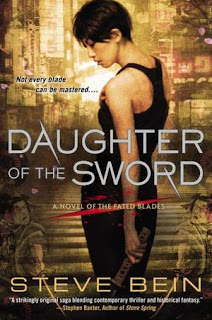 Steve:  Does swinging swords around in my house count as quirky? I choreograph fight scenes the same way you’d do it in a movie, physically acting it out, and with Daughter of the Sword that involved a bit of swordplay in my office, my bedroom, my kitchen, my basement….

What else? M&Ms are a must for writing. So are pen and paper; I’m still old tech. I used to stay up until 3:00 and 4:00 in the morning to write, but I’m trying to cut back on that little quirk these days.

Steve:  Most recently, China Mieville and Neal Stephenson. Larry David too, oddly enough; I don’t write comedy but he has a gift for weaving multiple plotlines together. I have unending admiration for Philip K. Dick and Ted Chiang, the philosopher-kings of SF. The day I can write like them is going to be a pretty great day.

This list is sounding a little macho, isn’t it? As much as I love all those guys, Helen Dewitt’s The Last Samurai still remains the best novel I’ve ever read.

Steve:  Plotter all the way.

Steve:  Plotting, actually. I’ve tried writing by the seat of my pants, but it doesn’t go anywhere, so the hardest road is the only one I can take.

The most difficult thing for me is turning story ideas into stories. I’ve been making a study of this, actually, trying to uncover some kind of trick that will make it easier. I read a lot of philosophy every week, and being a fan of Ted Chiang and Philip K. Dick, I’m always on the lookout for philosophically engaging story ideas. And I find them all the time, but then comes the alchemy: turning leaden ideas into golden stories.


TQ:  Describe Daughter of the Sword (The Fated Blades 1) in 140 characters or less.

Steve:  Three masterwork swords change history; cops, yakuzas, soldiers, and samurai do their best to change it back. Can they succeed? Read on.

Let me do one for Only a Shadow too, if you would:

An aging ninja master must enlist the man who wants to supplant him to infiltrate an impregnable castle and save their clan from extinction.


TQ:  What sort of research did you do for Daughter of the Sword?

Steve:  Loads! Most of Daughter of the Sword takes place in 21st century Tokyo, which I know pretty well, but I still had to do a lot of research on police work, especially on how different it is in Japan as compared to the States. Then there are the historical sections of the book: one with samurai in the 11th century, one with samurai in the 16th century, and another chunk set in WWII. Originally there was another storyline set in the 1400s, but that’s taken on a life of its own, and now it’s the stand-alone novella Only a Shadow. So that makes four different eras, all of them unique, all of them difficult to research because this is Japan and not, say, Germany or England. Studying up on medieval Europe is easy. Finding similar resources on Japan can be a real pain in the neck.


TQ:  What inspired you to write Daughter of the Sword?

Steve:  Lots of things. It started with a dream, actually, of a katana that leaves this haunting sound in the air whenever it cuts. Samurai movies were a big influence too. There’s a classic series of Lone Wolf and Cub films, which are hilarious and horrifying and badass all at once. The little boy in those movies is called Daigoro, and so is the boy samurai in Daughter of the Sword. There’s also a series starring Zatoichi, the Blind Swordsman. He’s sort of Zorro-meets-Robin-Hood-meets-Beatrix-Kiddo. I don’t have the same Tarantinoesque bloodfest going on, but I do have a blind swordsman, thanks to Zatoichi.

That explains the samurai stuff, but not the parts set in 1942 and 2010. I chose WWII because it was such an enormous event in Japanese history, so I felt it just had to get into the book somehow. The modern story, Mariko’s story, had to be invented ex nihilo. “Inspiration” isn’t the right word for how she came to be; the book just demanded her to be there.

Steve:  The easiest is Daigoro, a samurai boy struggling to live up to his father’s image. I just love picking on him. I don’t know why he’s so much fun, but I love making his life worse and worse. He’s constantly overshadowed by his brother, and his father’s shoes are just too big to fill, and then I make him and his brother butt heads over the possession of a sacred sword—the very symbol of their house. He’s got a really strong moral code, and I give him lots of opportunities to make his life easier by breaking it, but he just can’t do it. Poor guy.

The hardest is Mariko, without a doubt. She’s the only woman to make detective and sergeant in Tokyo’s most elite police unit, and so in some ways she’s like Daigoro: constantly under pressure, and the pressure just keeps mounting as the book goes on. But she’s the only female POV character, which is tough, and I’ve never been a cop, so I had to do ride-alongs and a lot of interviews to get into her head. Besides all that, her story is what holds the rest of the book together. All of the historical segments are self-contained and self-coherent. Mariko’s story has to do all of that and unite all the other stories too. Everyone else can be a brick, but she has to be both brick and mortar. For a guy who finds plotting to be a challenge, writing Mariko is as tough as it gets.


TQ:  Without giving anything away, what is/are your favorite scene(s) in Daughter of the Sword?

Steve:  Daigoro and Mariko both have terrific showdowns. Mariko ends up with a sensei who’s very much like my grandfather in many respects, and very much like my mentor when I lived in Japan. I don’t know how much of that will come across to people who don’t know my grandpa or Yuasa-sensei, but writing those scenes allowed me to reflect a lot on moments I spent with them, and that’s what I think of whenever I revisit those scenes.

Steve:  Drugs and ninjas. I just turned in the manuscript for Year of the Demon, the second book in the series. Daigoro gets a lot more attention in this one, and once again it’s Mariko who holds the whole book together. I’ve got some new protagonists coming in too, including Mariko’s new partner in the Narcotics division, plus a whole bunch of ninjas.

Steve:  It’s been such a pleasure. Thanks so much for inviting me here. 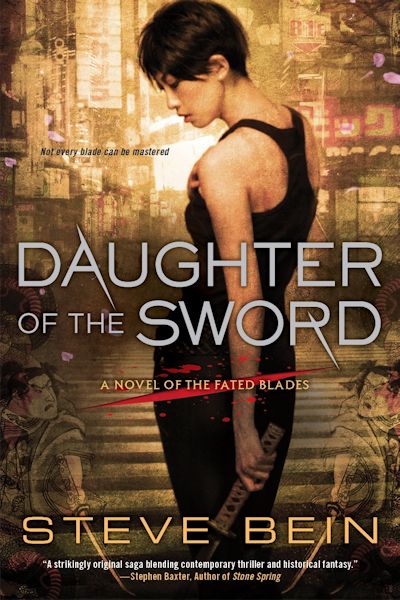 Mariko Oshiro is not your average Tokyo cop. As the only female detective in the city’s most elite police unit, she has to fight for every ounce of respect, especially from her new boss. While she wants to track down a rumored cocaine shipment, he gives her the least promising case possible. But the case—the attempted theft of an old samurai sword—proves more dangerous than anyone on the force could have imagined.

The owner of the sword, Professor Yasuo Yamada, says it was crafted by the legendary Master Inazuma, a sword smith whose blades are rumored to have magical qualities. The man trying to steal it already owns another Inazuma—one whose deadly power eventually comes to control all who wield it. Or so says Yamada, and though he has studied swords and swordsmanship all his life, Mariko isn’t convinced.

But Mariko’s skepticism hardly matters. Her investigation has put her on a collision course with a curse centuries old and as bloodthirsty as ever. She is only the latest in a long line of warriors and soldiers to confront this power, and even the sword she learns to wield could turn against her. 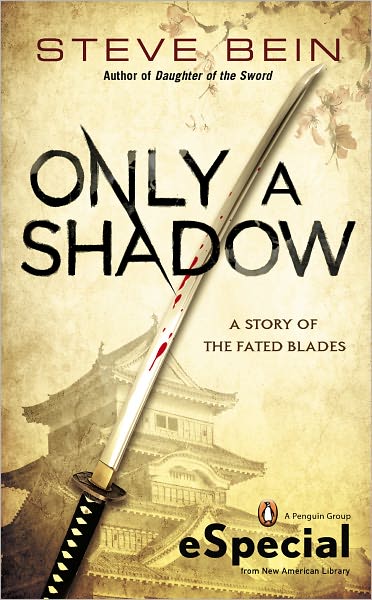 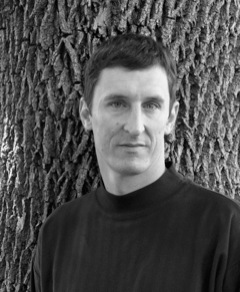 Steve Bein is a philosopher, martial artist, climber, photographer, diver, world traveler, and award-winning sci fi and fantasy author. His short fiction has appeared in Asimov’s, Interzone, as a winner in the Writers of the Future contest, and in international translation. Daughter of the Sword, his first novel, has already received critical acclaim.

Steve divides his time between Rochester, Minnesota, and Rochester, New York, where is a visiting professor of Asian philosophy and Asian history at SUNY-Geneseo. His other academic interests include bioethics, which led him to a brief stint as a visiting researcher at the Mayo Clinic, environmental philosophy, which led him to see polar bears in Canada and penguins in Antarctica, and philosophy and science fiction, which leads him everywhere else in the universe.

Please visit Steve at www.philosofiction.com. If you like Steve on Facebook, you can receive an autographed sampler from Ace and Roc featuring the first two chapters of Daughter of the Sword. You can also find a preview of Daughter of the Sword in the companion novella, Only a Shadow, which will bring lots of ninja action to your e-reader.
Posted by Qwill at 8:02 AM

Labels: 2012 DAC Interview, 2012 Debut Author Challenge, Daughter of the Sword, Only a Shadow, Steve Bein, The Fated Blades
Email ThisBlogThis!Share to TwitterShare to FacebookShare to Pinterest