Interview with D.J. McIntosh, author of The Witch of Babylon, and Giveaway - October 17, 2012

Please welcome D.J. McIntosh to The Qwillery as part of the 2012 Debut Author Challenge Interviews. The Witch of Babylon, D.J.'s US debut, was published on October 16, 2012. 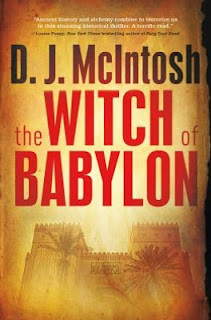 TQ:  Welcome to The Qwillery!

D.J.:  Thanks very much Sally – glad to come aboard and love your questions.

D.J.:  I’ll often write late in the day, sometimes until midnight. The witching hour I guess!

D.J.:   J.R.R. Tolkien and Frank Herbert rate really, really high. I’ve gone back to their books again and again. Some of their perspectives may have rubbed off because although not strictly supernatural, fantastical elements slip into my work more and more often. It’s not just the worlds that Tolkien and Herbert created which are so absorbing but the central human truths at the heart of their stories.

D.J.:  The first draft. Once that’s done, making all the revisions feels like pure bliss.


TQ:  Describe The Witch of Babylon (Mesopotamian Trilogy 1) in 140 characters or less.

D.J.:  A deadly game reveals the truth about a famous story the world believes is just a myth.


TQ:  Tell us something about The Witch of Babylon that is not in the book description.

D.J.:  “The Witch” belongs to the genre of antiquity or historical thrillers and these books are often an Indiana Jones-like romp through many countries in search of an elusive and priceless relic. My novel, although like that, has a much darker side because it’s partially set against the backdrop of the Iraq war and even though it’s fictional, it highlights some of the fearsome events that that took place in the early days of the war.


TQ:  What sort of research did you do for The Witch of Babylon?

D.J.:  When I began writing “The Witch” I knew little about Mesopotamian history or alchemy. I actually began with the Book of Genesis and quickly learned that a number of stories in Genesis are based on much older Mesopotamian myths. It took years to bring myself up to speed on both the origins of alchemy and Assyrian literature and history. My primary sources were books and the internet. All that time spent though, turned out to be a labor of love because the research was so fascinating.


TQ:  What is one of the oddest things you found during your research?

D.J.:  That a mistress of a French king died from poisoning after taking a drink saturated with gold particles.

D.J.:  The easiest to write was John Madison, an art dealer and the central character, maybe because I like him and was drawn to his persona as I began writing the book. I wanted a character who seemed like a real person, not a hero figure who would use military or police skills to get him out of difficult situations. The hardest to write was the lead woman – Laurel – because of her complex nature.


TQ:  Without giving anything away, what is/are your favorite scene(s) in The Witch of Babylon?

D.J.:  When they find the treasure and it’s revealed what it is.

D.J.:  Hard at work on Book 2 in the trilogy, The Book of Stolen Tales. It features John Madison on the hunt for a rare 17th century Italian anthology of fairy tales. As his quest deepens, the dark origins of these tales appear to come to life. I’m especially excited about this because 2012-2013 is the 200th anniversary of the Grimm brothers first book!


The Witch of Babylon 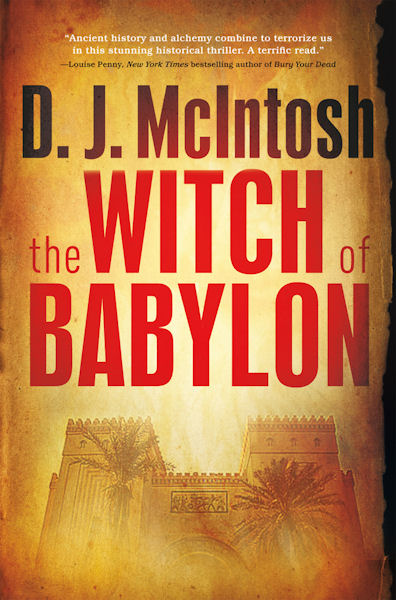 Out of the searing heat and sandstorms of the infamous summer of 2003 in Baghdad comes The Witch of Babylon, a gripping story rooted in ancient Assyrian lore and its little-known but profound significance for the world.

John Madison is a Turkish-American art dealer raised by his much older brother, Samuel, a mover and shaker in New York's art world. Caught between his brother's obsession with saving a priceless relic looted from Iraq's National Museum and a deadly game of revenge staged by his childhood friend, John must solve a puzzle to find the link between a modern-day witch and an ancient one.

Aided by Tomas, an archaeologist, and Ari, an Iraqi photojournalist—two men with their own secrets to hide—John races against time to decipher a biblical prophecy that leads to the dark history behind the science of alchemy. Kidnapped by villainous fortune hunters, John is returned to Iraq, where a fabulous treasure trove awaits discovery—if he can stay alive long enough to find it. 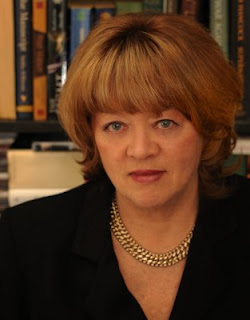 D.J. (Dorothy) McINTOSH is the former co-editor of the Crime Writers of Canada's newsletter, Fingerprints, and is a Toronto-based writer of novels and short mystery fiction. Her short story "The Hounds of Winter", published in Blood on the Holly by Baskerville Books (Toronto, 2007), was nominated for the 2008 Arthur Ellis Award for Best Short Story. "A View to Die For" appeared in Bloody Words: The Anthology, also published by Baskerville Books (Toronto, 2003). McIntosh graduated with a B.A. in English from the University of Toronto.

What:  One commenter will win a copy of The Witch of Babylon from Forge Books! US ONLY


Do you believe that myths have some truth to them?

Who and When:  The contest is open to all humans on the planet earth with a US mailing address. Contest ends at 11:59pm US Eastern Time on Wednesday, October 24, 2012. Void where prohibited by law. No purchase necessary. You must be 18 years old or older to enter.


*Giveaway rules are subject to change.*
Posted by Qwill at 8:28 AM