Please welcome Palmer Pickering to The Qwillery as part of the Self-Published Fantasy Blog-Off 5 Interviews. Palmer has submitted her novel, Moon Deeds, to SPFBO 5. 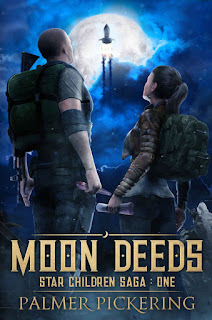 Palmer:  A short story when I was eight or ten after I saw a burnt spoon in the bathroom at our church and I thought it was a heroin cooking spoon (I grew up in the 70's when there was a lot of drug culture on TV). It scared the heck out of me. And so I wrote about it. The story was something from the perspective of the woman who I imagined owned and used the spoon. My friend's mother read the story, and was so freaked out by it, it scared me away from writing fiction for several years.

Palmer:  Mostly a pantser, but I've become a bit of a plotter to save myself the pain of extensive pruning, transplanting, and weeding. I love the creative zone/mental state of free-form creativity. That realm is where most of the best stuff comes from, for me.

Palmer:  We are descended from aliens.

TQ:  What inspired you to write Moon Deeds?

Palmer:  One Christmas, my brother gave me a gag gift of a deed to land on the moon. Parchments complete with property rights, a map, and the coordinates of my parcel. I said to myself, "What if this is legit? What would be the most extreme future scenario where my descendants would REALLY need this deed?" At the same time, I was collecting "Lemurian" crystals, which supposedly contain encoded data of the Akashic records, or alien history and technology. Again, I wondered, "What if it were true?" That is how Moon Deeds was born.

TQ:  Please tell us about the cover for Moon Deeds.

Palmer:  Jake Caleb Clark (JCaleb Design) did the cover. It shows the two main characters, twenty-year-old twins, Torr and Cassidy, looking up at the moon.

TQ:  In Moon Deeds who was the easiest character to write and why? The hardest and why?

Palmer:  Easiest: Cassidy. I guess because she's most like me. We're both female, first of all. She's strong and logical and courageous, but also believes in unseen forces. She is painfully empathic and sensitive to the energies of those around her. She is a healer. She finds herself in compromising situations because of her fearless nature.

Hardest: Torr. He's a male soldier who sees combat and suffers from PTSD. I am none of those things. I had to do a ton of research on everything: assault rifles, sniping, and hand-to-hand combat; I read autobiographies of Navy Seals to get into a warrior's head; I got some friends who are recent combat veterans from the Iraq and Afghanistan wars to read the book and make sure I was not way off on tactics, culture, and mindset. I basically second-guessed myself on all those things, and so it took a long time to construct even a simple paragraph.

TQ:  Does Moon Deeds touch on any social issues?

TQ:  Give us one or two of your favorite non-spoilery quotes from Moon Deeds.

"The path to power is cloaked in shadows, so if you avoid all the shadows, you'll never learn anything."

Palmer:  I am in the final content review of "Light Fighters," Book Two of the series (Star Children Saga). It's due out in 2020. Books Three, Four, and Five are half-written. Yes, it will be a long series, broken up into trilogies, plus a parallel story from the point of view of the "Star People." I also have a Sword and Sorcery tale that's pretty much done. It's a completely different universe -- pure fantasy with castles and horses and swords and mages and princesses and such. It's a lot of fun. The working title is "Heliotrope" and will probably come out after "Light Fighters." You can see brief descriptions at www.mythologypress.com (that's my own indie press).

Palmer:  You rock!! Thanks for supporting the world of speculative fiction. 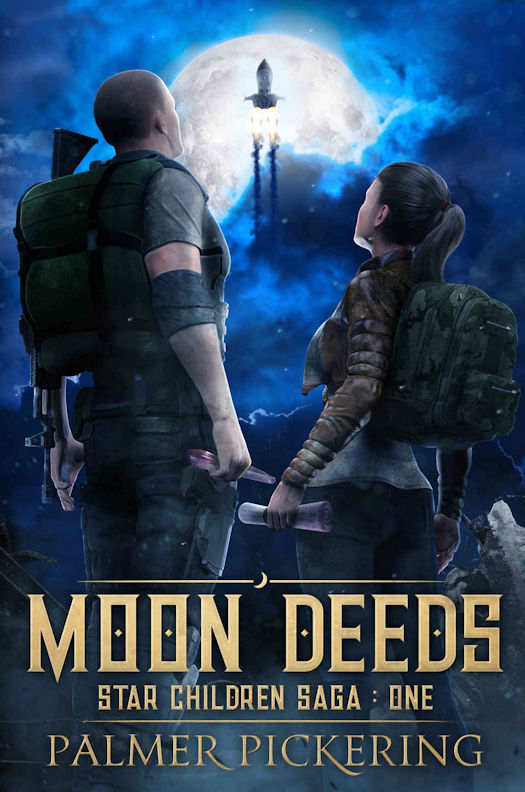 It's 2090: the last outpost of freedom is the moon, the best defense against technology is magic, and the only hope for humankind rests in the hands of the Star Children.

Twins Cassidy and Torr must save Earth from a ruthless enemy at a time when the only force more powerful than alien technology is magic. Moon Deeds launches the siblings' journey across the galaxy, where they must learn their power as the Star Children, claim their shamanic heritage, and battle dark forces that threaten humankind.

The Star Children Saga follows Cassidy and Torr as they slowly awaken to their destiny as the twin Star Children, born every millennium to reconnect with the source of all life. They come to discover the sheer enormity of their task: to find our ancestors on a lost planet across the galaxy and save humanity from a spiraling descent into darkness. The powers they must wield to accomplish this task are truly frightening and put at risk everything they love.

Come along with 20-year-old twins Cassidy and Torr, who inherited deeds to land parcels on the moon. They want to use their moon deeds to get off Earth and escape a brutal dictatorship. But first they must unlock their shaman powers.

A rollicking yet poignant adventure in the not too distant future, when we have colonized the moon and nearly lost Earth to a dictatorship. Only the shamans remain free, plus the lucky ones who escaped to the moon. 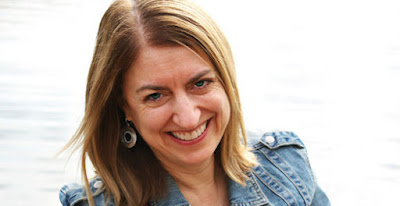 Palmer has been writing fiction since she was eight. She received her BA in American Studies from Wesleyan University, with concentrations in Religion and Race Relations.

She currently works in Silicon Valley as an Innovation and Technology Manager for HP, Inc. In addition to her career in high tech, Palmer holds a certificate in Chinese Acupressure, is a certified solar panel installer, and studied Tibetan Buddhism with the 14th Dalai Lama.

She lives and writes in the magical redwood forest of the Santa Cruz Mountains, California, and has a second home in Nashville, Tennessee, where she dabbles in songwriting.