SPFBO 5 Interview: John A. Pretorius, author of Living in Times of Dragons


Please welcome John A. Pretorius to The Qwillery as part of the Self-Published Fantasy Blog-Off 5 Interviews. John has submitted Living in Times of Dragons to SPFBO 5. 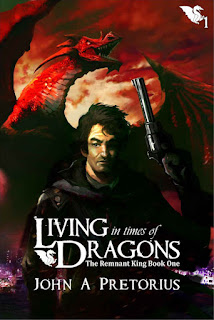 John:  When I was ten I wrote a book about people exploring a strange island. Because I was ten there were a lot of bad puns in it, and I thought I they were very clever.

John:  I'm a hybrid. I plan, but I don't plan it out blow for blow usually. When I do, I don't always keep to it. Writing for me is ultimately intuitive.

John:  Rewriting. It's easier to lay a foundation than to build on it.

TQ:  Describe Living in Times of Dragons using only 5 words.

TQ:  What inspired you to write Living in Times of Dragons?

John:  I created the character for a crime novel that I never finished... or really got anywhere with. One day I imagined this protagonist, Roger, looking out a window and him seeing a dragon. The dragon then begins to chase him.

TQ:  Please tell us about the cover for Living in Times of Dragons.

John:  The artist is known as PhanDuy, and is from Vietnam. It doesn't depict any deliberate event in the story, but has the feel of the first section.

TQ:  In Living in Times of Dragons who was the easiest character to write and why? The hardest and why?

John:  The protagonist, Roger, was the easiest to write. I had started two novels with him that went nowhere, but in the second novel I managed to nail the feel of the character and create a backstory. By the time I wrote this novel he was fleshed out in my mind, and I could put him to paper with ease.

Hardest was his son, Ian. Ian was a character I struggled developing, and in the first draft he had the personality of a wooden plank. Considering he's important to the story this was a huge problem. It took several rewrites for me to nail down a personality for him.

TQ:  Does Living in Times of Dragons touch on any social issues?

TQ:  Give us one or two of your favorite non-spoilery quotes from Living in Times of Dragons.

My hands were free and I began to feel around inside the mouth of the beast. I reached and touched a huge canine, then my other hand went in under the tongue. Suddenly its sharp teeth pressed down gently upon my shoulder and calves while the tongue pressed my stomach onto the roof of the mouth. Then I heard a voice in my head. "Don’t try anything, Atuor."

The fear that it had somehow gotten into my head, that it was invading my thoughts and feelings and poking its own mind where I was not wanted, made me angry. But I called its bluff. “You wouldn’t kill me,” I said. “You want me alive.”

I felt its teeth momentarily press down very hard into my calves again, this time hard enough that I could feel it cut my skin. Its voice then came; its tone darkly humorous. "Indeed we do, Atuor. We need you alive, but we don’t really need your feet. Now stop squirming."

John:  I'm working on the sequel, which is 90% done as a first draft. I'm also reworking a short story I wrote that got accepted for an anthology which was never published. 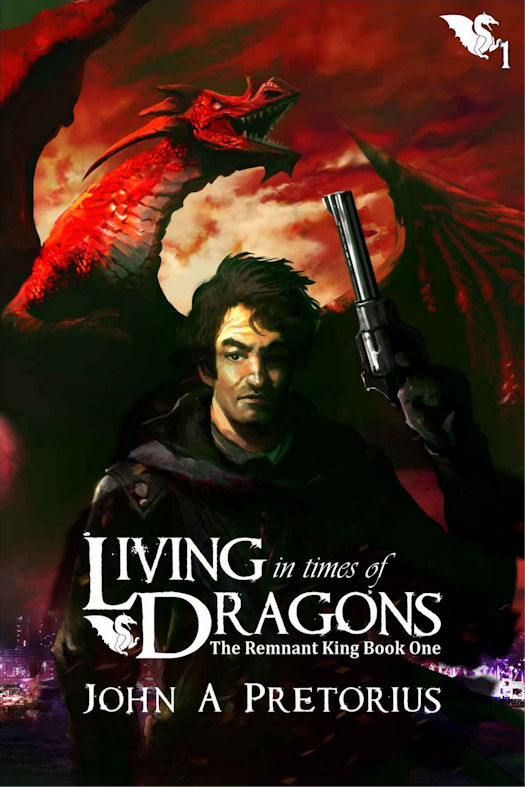 "...as with everything in my life all this began with dreams..."

American ex-pat, father and widower, Roger Rommel, did not believe in dragons. Unfortunately they did not return the sentiment.

After returning from a self-imposed exile to his adopted country of South Africa, Roger is confronted by these legendary fire-breathing reptiles who risked exposing their hidden world simply to hunt him. Gifted with the ability to create and enter dreams, as well as to see the future, he tries to survive and protect his son from enemies he does not understand.

But the past is alive, and he finds himself linked to a conflict thousands of years old. The world he knew is now stranger, more fantastic and terrifying than he truly knew, especially when everyone is out to get you.

John A Pretorius was born in 1981 in South Africa, in the city of Pretoria, where he still lives. Currently he works as a salesperson, but has been writing in his spare time since highschool.

Living in Times of Dragons is his first novel, but Pretorius is working on more which he hopes to publish soon.