Review: The Winter of the Witch by Katherine Arden 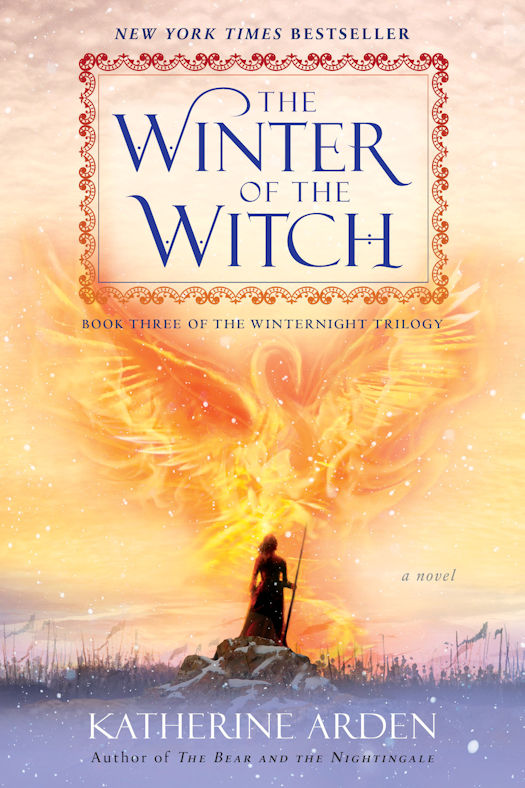 NEW YORK TIMES BESTSELLER • Following their adventures in The Bear and the Nightingale and The Girl in the Tower, Vasya and Morozko return in this stunning conclusion to the bestselling Winternight Trilogy, battling enemies mortal and magical to save both Russias, the seen and the unseen.

“A tale both intimate and epic, featuring a heroine whose harrowing and wondrous journey culminates in an emotionally resonant finale.”—Publishers Weekly (starred review)

Vasilisa Petrovna is an unforgettable heroine determined to forge her own path. Her gifts and her courage have drawn the attention of Morozko, the winter-king, but it is too soon to know if this connection will prove a blessing or a curse.

Now Moscow has been struck by disaster. Its people are searching for answers—and for someone to blame. Vasya finds herself alone, beset on all sides. The Grand Prince is in a rage, choosing allies that will lead him on a path to war and ruin. A wicked demon returns, determined to spread chaos. Caught at the center of the conflict is Vasya, who finds the fate of two worlds resting on her shoulders. Her destiny uncertain, Vasya will uncover surprising truths about herself as she desperately tries to save Russia, Morozko, and the magical world she treasures. But she may not be able to save them all.

The Winter of the Witch, Arden's final instalment of her Winternight Trilogy, starts immediately after the dramatic events of book 2 - The Girl in the Tower. The residents of Moscow have woken up to the devastation left by a massive fire. Parts of the city are in ruins and friends and family are dead or homeless. They are looking for answers but more importantly for someone to blame. Unfortunately, Vasya is in the cross hairs as she no longer has the protection of the Grand Prince who is angry and no longer trusts her or her brother, the monk Alexander. Without his support Vasya is left vulnerable and on her own. Even more dangerous than the mobs looking for revenge is Father Konstantin. He is determined to destroy Vasya and teams up with a demon who wants revenge and to create chaos wherever he goes. With all of Russia on the brink of war and desperate to protect those she loves Vasya embarks on a journey to find the one person who can help her, the Winter King. Time is running out for Vasya to save her family and the magical world she has grown to love.

Arden keeps the pressure on Vasya throughout this novel and the suspense is high from the very start through to the very end of the story. She doesn't do this by dragging her heroine through countless high action scenes like many authors like to do. Instead the story is a clever balance of action, character development and strategically placed reveals or uncovering of secrets. Arden has the unique ability to create the sense that you are reading folklore rather than new fantasy fiction. This adds another element to the enjoyment of this instalment and the series as a whole.

Vasya is a great character and throughout the series the reader has the opportunity to see her grow and evolve. It's hard to believe she is only in her late teens in the final book but give the time period that was probably middle age. She certainly acts like someone far older and more mature than a 17 year old. I love her relationship with the magical characters she was trying to save, especially the various domovoy who protect the home and hearth. Through Vasya, the readers learns how the spread of Christianity started to cause the magical creatures and pagan gods to weaken and disappear. This is one of the causes the rift between Vasya and her brother who is a monk as she has magical abilities that conflict with his Christian beliefs. This is also the reason why Father Konstantin hates her so.

Through her travels Vasya meets many of the magical creatures that make up Russian folklore. Arden uses real historic events and people as the basis of the main plot of this story which again, gives the impression you are reading something other than fantasy fiction.

I actually listened to the audio version The Winter of the Witch and if you have this opportunity available to you I highly recommend it. The story is narrated by Kathleen Gati and she does an excellent job of bringing Vasya to life. Unlike some narrators, Gati doesn't try to sound like a man when reading the dialogue of male characters which I much prefer. Keeping the narration in one tone of voice reinforces the impression that this is folklore, a story retold from one generation to the next.

I have thoroughly enjoyed this series and The Winter of the Witch is a fantastic ending to Vasya's story. There isn't anything I would change in this instalment. Great book, great series but start with book 1 - The Bear and the Nightingale.
Posted by Melanie at 6:00 AM