Please welcome Jay Allan to The Qwillery. The Emperor's Fist was published on August 20, 2019 by Harper Voyager. 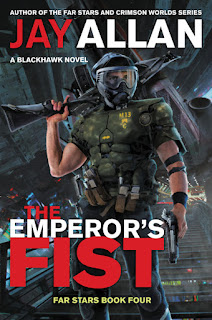 TQ:  Welcome back to The Qwillery. What is the first fiction piece you remember writing?

Jay:  I could probably come up with vague recollections of various things that never amounted to anything, but the first book I finished was Marines, which started my career.

TQ:  You've written well over 2 dozen novels. How has your writing process changed over the years?

Jay:  I’d say two things have changed. First, I’m a lot more comfortable, and the words flow more easily than they used to. Second, I’ve tried to pay attention to comments and reviews. You write something, but of course, you’re trying to make it resonate with the reader. If there is too much repetition, for example, or not enough, reader comments are the best way to see that.

TQ:  If you could not write Military SF what else would you write?

Jay:  I’d probably be writing cyber-thrillers and the like. I was a big Tom Clancy fan, and I also like books that are right on the line between thriller and SF. Think the Andromeda Strain and the like.

TQ:  Tell us something about The Emperor's Fist that is not found in the book description.

Jay:  For those who’ve read the earlier books in the series, Blackhawk is somewhat of a tortured character. In The Emperor’s Fist, we see more about his past, and we see him dealing with his greatest struggle resulting from that.

TQ:  Do you need to read the Far Stars novels in order?

Jay:  I don’t think so. If you read The Emperor’s Fist and like it, the previous trilogy is sort of a prequel to you, but I think the new book works well as a standalone, too.

Jay:  Well, I like to think I’m not done with Blackhawk and the other from the Far Stars, but I don’t know when I’ll get back to them. I’m continuing to work on my Blood on the Stars series, with book 14 coming out in September. Next year, I’ve got two new things coming, one that is really special that I still can’t share yet, and the other is a series about an alien invasion of Earth and the resistance to it. I’ve been planning that for a while, and I’m excited to finally get it started. 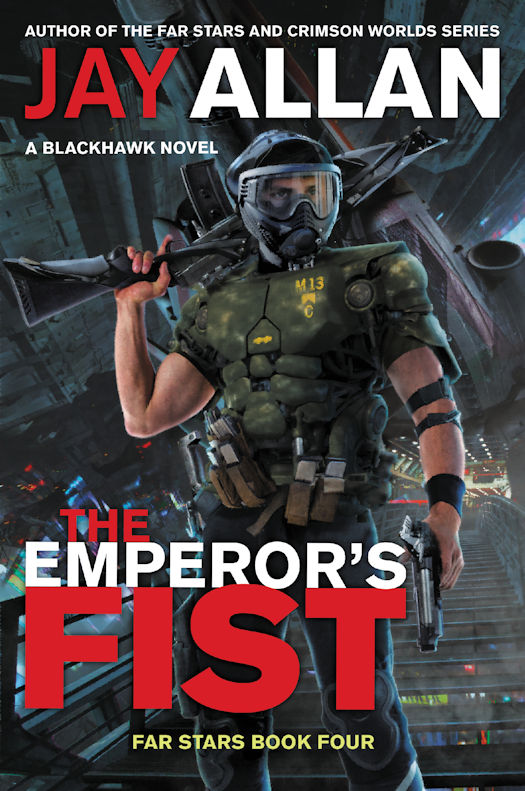 In this thrilling new installment in the Far Stars saga, a reluctant hero with a bloody past must reunite with an old love to battle an evil emperor willing to destroy all their worlds if he cannot control them.

When the Far Stars came under imperial attack, Astra Lucerne—the daughter and successor of the Far Stars’ greatest conqueror—Marshal Augustin Lucerne—rallied her father’s confederation forces to defend their worlds. They were joined in the fight by former imperial general Arkarin Blackhawk, a warrior whose skills and brutality made him infamous, and who has, for two decades, sought the redemption he knows is unreachable.

Now, with the imperial foothold in the sector eliminated, the Far Stars is free and almost united. While Astra’s forces continue to depose local tyrants and warlords, Ark and his crew have slipped back into the shadows. Though his heart belongs to Astra, Ark cannot get too close. His imperial conditioning remains under control, but it is still volatile, and the temptation of power threatens to unleash the dark compulsions that made him the most merciless of the emperor’s servants. He cannot risk allowing Astra to see the darkness inside him.

But while the battle has been won, the war may not be over. A petty smuggler makes a discovery that can enable the emperor to strike back and crush the resistance—unless Ark and Astra join forces again to stop him.

Jay Allan is a former investor and the author of the Crimson Worlds series and the Far Stars Confederation series. When not writing, he enjoys traveling, running, hiking, and reading. He loves hearing from readers and always answers emails. He currently lives in New York City.