Interview with Sarah Gailey, author of Magic for Liars


Please welcome Sarah Gailey to The Qwillery as part of the 2019 Debut Author Challenge Interviews. Magic for Liars is published on June 4, 2019 by Tor Books. 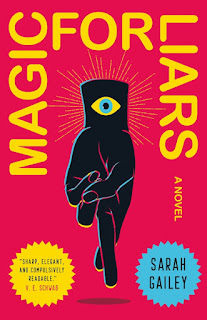 Sarah:  The very first piece of fiction I ever wrote was a short story for a Young Authors contest at my elementary school. I was in first grade, and I wrote a story about a guy named Bob who saved the Queen of England from being killed by a wave of acid. I was really into the idea of being the queen of something at the time, because I figured being a queen was a lot like being the president, but with more gold and access to cool frogs.

Sarah:  For long fiction, I’m a hardcore plotter. I have lengthy spreadsheets that help me keep track of story beats. For short fiction, I’m a little more of a pantser — I have an idea of where I want the story to go, and I let it happen however it wants to happen.

Sarah:  I struggle a lot with remembering to describe what people look like. I think part of that is because I have such a hard time remembering faces — I generally remember a person by their mannerisms, or their sense of humor. So when I’m trying to tell a reader what a character looks like, I tend to talk about things like their walk and their neck and their perfume, and then my poor editor has to remind me that people also have faces.

Sarah:  This might sound silly, but my writing is heavily influenced by television. I pay close attention to the way TV writers structure narrative beats, plot development, and character arcs. Bringing those elements into my writing helps me craft stories that readers can stay invested in. I also pull a lot from contemporary horror, a genre that I think is exquisite at establishing stakes and then raising them higher and higher. I would also be remiss if I didn’t mention some of my biggest narrative influences: Mario Puzo, Erin Morgenstern, and of course, Clive Barker.

TQ:  Tell us something about Magic for Liars that is not found in the book description.

Sarah:  There’s a significant focus in the book on consent and bodily autonomy. A lot of magical narratives ignore a person’s right to decide what happens to their body, and I think that’s worth exploring. For instance, the leg-locker spell in HARRY POTTER — a spell that locks the victim’s legs straight and together, so they can’t walk. This spell is treated as mild, nonthreatening, and relatively harmless (if inconvenient). In practice, though, a spell like this would be viscerally harmful. It’s a spell that immobilizes and pronates a person without their consent. In much of MAGIC FOR LIARS, I explore the consequences of such casual disregard for bodily autonomy.

TQ:  What inspired you to write Magic for Liars?

Sarah:  A challenge: my agent, DongWon Song, said ‘I bet you can’t do it.’ (He is very artful, and often tricks me into doing hard things using this method.)

TQ:  What appealed to you about combining Contemporary Fantasy with Noir?

Sarah:  I think there’s an angle on the magical school narrative that can be very bright and optimistic. This is understandable — adding magic to a standard school narrative is, in many ways, an attempt to make the idea of adolescence more bearable. That said, there is a dark underbelly to every story, Noir tends to be very interested in exploring the different ways people can hurt each other, and I was captured by the idea of exploring the way magic might change the harm we inflict upon each other.

TQ:  What sort of research did you do for Magic for Liars?

Sarah:  I spent a lot of time talking to a doctor who performs abortions. I could not have written this book without the information she gave me about different types of abortions and abortion ethics. Her insights were absolutely crucial. I also did a lot of reading about the practice of private investigation, and the ethics of investigating crimes committed by minors.

TQ:  Please tell us about the cover for Magic for Liars.

Sarah:  The cover art for this book is by Will Staehl, who is absolutely brilliant. The central graphic references the disorienting perspective of the book, and the unreliability of the narrative. Nothing in this book is what it first appears to be, and the truth is never simple. Between the optical-illusion-style graphic and the vibrating colors that outline it, Staehl managed to capture that feeling beautifully.

TQ:  In Magic for Liars who was the easiest character to write and why?

Sarah:  I had a great time writing Rahul Chaudhary, the Physical Magic teacher at Osthorne Academy for Young Mages. He is Ivy Gamble’s window into the world of the faculty at the school, and also becomes a romantic interest. Writing him was easy, because his character is fundamentally good-hearted (unlike most of the characters in the book). Being able to write someone who is doing his best to do good in the world was incredibly refreshing.

TQ:  Does Magic for Liars touch on any social issues?

Sarah:  Absolutely. MAGIC FOR LIARS touches on classism, especially in academia; it also looks at consent and reproductive rights. Teens in this book deal with healthy and unhealthy perspectives on sex and sexuality. The protagonist struggles with alcoholism and isolation, both of which point toward her struggles with mental health. There are several queer characters in the book as well.

TQ:  Which question about Magic for Liars do you wish someone would ask? Ask it and answer it!

Sarah:  I wish someone would ask me about the differences between the first draft and the final draft, because answering that question gives me the chance to gas up my brilliant editor, Miriam Weinberg. She took this book further than I ever thought it would be able to go. In the first draft of MAGIC FOR LIARS, I held back, fearful of what would happen if I made any character suffer too much. Miriam stripped away the safety nets I’d set up for the reader, and the result is a book that feels infinitely less tentative.

TQ:  Give us one or two of your favorite non-spoilery quotes from Magic for Liars.

“I couldn’t tell if I’d been there for happy hour before, or if I’d just been to a thousand places exactly like it. Places like that were springing up around Oakland by the score back then, every one a marker of the way the city was changing. It felt all-at-once, even though it had been brewing for years. Decades. Across the bay, San Francisco bled money like an unzipped artery. Those who had been privileged enough to have their buckets out to catch the spray drove back over the water to Oakland — from The City to the Town. The bumped aside people who had been living in these neighborhoods for generations, and they tore down storefronts, and they built brunch pubs with wood reclaimed from the houses they were remodeling.”

Sarah:  I have a book-heavy 2020, with my first YA book, a new novella, and a second as-yet-unannounced-novel, which I can't wait to tell people more about.

Sarah:  Thank you so much for having me! 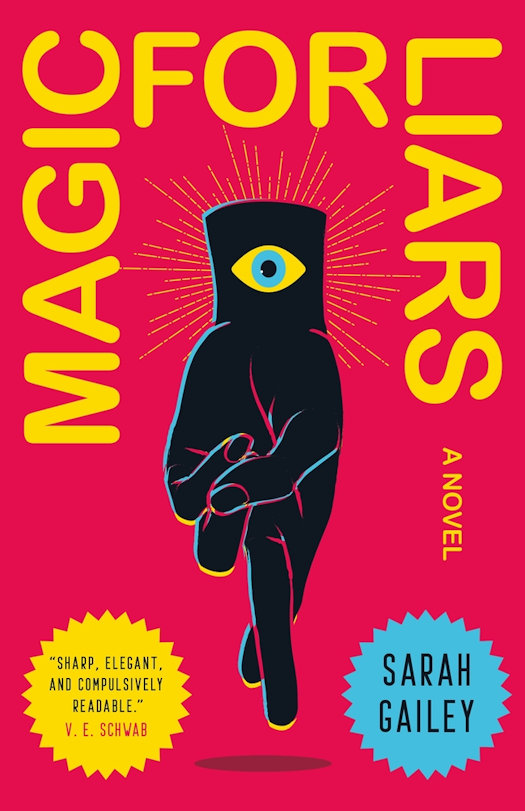 Ivy Gamble was born without magic and never wanted it.

Ivy Gamble is perfectly happy with her life – or at least, she’s perfectly fine.

She doesn't in any way wish she was like Tabitha, her estranged, gifted twin sister.

Ivy Gamble is a liar.

When a gruesome murder is discovered at The Osthorne Academy of Young Mages, where her estranged twin sister teaches Theoretical Magic, reluctant detective Ivy Gamble is pulled into the world of untold power and dangerous secrets. She will have to find a murderer and reclaim her sister—without losing herself.

“An unmissable debut.”—Adrienne Celt, author of Invitation to a Bonfire

Hugo award winner Sarah Gailey is an internationally published writer of fiction and nonfiction. Their nonfiction has been published by Mashable and the Boston Globe, and they are a regular contributor for Tor.com and Barnes & Noble. Their most recent fiction credits include Fireside Fiction, Tor.com, and The Atlantic. Their debut novella, River of Teeth, was published in 2017 via Tor.com and was a 2018 Hugo and Nebula award finalist. Their adult novel debut, Magic For Liars, will be published by Tor Books in June 2019. Their Young Adult novel debut, When We Were Magic, will be published by Simon Pulse in Spring 2020. You can find links to their work at www.sarahgailey.com; find them on social media @gaileyfrey.
Posted by Qwill at 6:30 AM