Interview with Ada Hoffmann, author of The Outside


Please welcome Ada Hoffmann to The Qwillery as part of the 2019 Debut Author Challenge Interviews. The Outside was published on June 11, 2019 by Angry Robot Books. 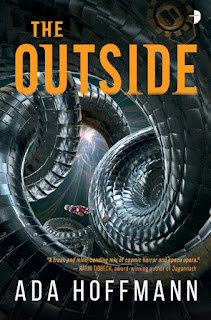 AH:  Ooh, this takes a bit of thinking. I've been making up stories since I was very tiny, and some pieces are borderline - I sort of remember them, but secondhand, from family stories or from having rediscovered drafts of them later.

The first story I'm sure I remember writing, in first grade, was called "Too Many Onions." It was a Robert Munsch-esque tale in which a family bought so many onions at the grocery store that their whole house was filled with onions from top to bottom. This is going to sound weird, but the reason I remember it is because it was the first time I used quotation marks. I hadn't seen the point of them before, even when I wrote dialogue, but there was something about the character throwing her hands up and declaring "We have too many onions!" that inescapably demanded them.

AH:  More to the plotter side, but not completely. I always make outlines because I can't get started without a plan; for novel-length work, I also need to start with some worldbuilding and character notes. But I also know that, once I see the story actually breathing on the page, I'll get some new ideas about where it should go and how it should get there. Sometimes I keep the outline vague to allow for this flexibility. Sometimes I make a more detailed one but diverge from it at will. Sometimes I get to a part where I realize I've been too vague, and then I need to work on a more detailed scene-by-scene plan for a few chapters before I can draft again.

AH:  Dealing with the anxiety. Am I doing it right? Did I do the previous thing right? I apparently did one thing right, but will I ever do anything right again? Aaaaaaaa.

TQ:  Describe The Outside using only 5 words.

TQ:  Tell us something about The Outside that is not found in the book description.

AH:  There are several factions in this book and one of the things I love is that readers legitimately differ as to who they sympathize with. Are you Team Cyborg Angel because their ruthless competence and their team dynamics appeal to you? Are you Team Cosmic Horror Mad Scientist because heck yeah let's rebel? Are you Team Yasira because her "grumpy sincerity" (as the Publisher's Weekly starred review put it) convinces you that human beings even in their darkest times are worth saving? I've seen all of these and more! (One reviewer was Team Sispirinithas The Giant Spider.) I genuinely love seeing different readers come away with different reactions like this; it means I wrote everyone's motivations in a way that felt real, even though there are some that I definitely see as villains.

TQ:  What inspired you to write The Outside? What appeals to you about writing Science Fiction?

AH:  The Outside's origin is actually quite silly - I had a crush on Akavi, who started life as a Lawful Evil D&D villain played by one of my friends. I wanted to write a book about him, but I didn't want it to be a D&D book, so I ended up filing off the serial numbers so hard he ended up in space.

Science Fiction and Fantasy (I don't make a hard mental distinction between the two genres) are my comfort zone. They're what I grew up reading and never stopped. I read other genres now and then, but what I love most is the ability to make up whatever I want about the world and what's possible there. If I tried to write a book that took place entirely within our actual consensus reality, I would feel very limited.

Science Fiction has an aesthetic that distinguishes it from traditional fantasy - SPACE! Computers! Really big guns! - and I feel drawn to that more than to the "harder" aspects, where it's supposed to be a serious attempt at extrapolating things from science. I love space opera, space wizards, and weird shit happening on spaceships, yum!

TQ:  What sort of research did you do for The Outside?

AH:  There is quite a lot in The Outside about mysticism, and although I was already somewhat familiar with that topic, I spent a long time trawling the Wikipedia about forms of mysticism from different world traditions. Dr. Talirr's heresies in The Outside aren't meant to parallel any specific tradition, but I did find words and concepts that helped me clarify my thinking about her. For the darker, more psychological aspects of the book, I found Judith Herman's Trauma and Recovery helpful.

TQ:  Please tell us about the cover for The Outside.

AH:  When it was time to start talking about cover art, the Angry Robot editors asked me if I had a Pinterest board for the book, so I whipped one up. I had never made a Pinterest board before and it was fun! I collected a lot of images showing the aesthetics of The Outside's different factions - clean and delicate modernism for the angels, rough and lived-in 20th-century aerospace technology for the humans, and some very surreal landscapes and architecture for a part of a planet that's affected by an especially nasty heretical effect.

For Dr. Talirr's aesthetic, I wanted pictures that were as messy and rough as the other human technology, but even more complicated and a touch surreal. I discovered there's a whole genre called "industrial photography", and I collected the weirdest industrial photography I could find. One of the pictures was a plasma generator from Japan with an odd, fluid, swirling design. That picture really clicked with my editor and with the cover artist, Lee Gibbons. Gibbons used that picture as a reference for a depiction of a scene near the middle of the book, where Yasira is spacewalking on the outside of a heretical ship. He kept the wonderful, dynamic composition of the original photo but made it even more surreal, with the parts of the ship vaguely resembling tentacles, plus a depiction of space and of a suitably tiny, space-suited Yasira.

I love this cover and the Internet seems to love it, too! I couldn't be happier with the design.

TQ:  In The Outside who was the easiest character to write and why? The hardest and why?

AH:  I think the easiest character might have been Elu Ariehmu, Akavi's assistant. There's something about Elu that feels very straightforward and easy for me to empathize with, even though his life choices aren't always necessarily the best.

The hardest was definitely Yasira. Protagonists have to be so deeply and fully realized, and they have to hit so many different notes correctly. I find it really tricky to write protagonists who are active, in the way that neurotypical Western readers expect, without making them deeply unlikable. Villians, yes, I can do those; heroes, for some reason, are hard. For a long time I couldn't get a handle on Yasira. She felt flat, no matter what I tried, even once I made her autism explicit.

It was a sensitivity read from Elizabeth Bartmess, who is an absolute genius about characters, that finally helped me figure Yasira out. Elizabeth helped me figure out that Yasira wasn't just autistic, she was mildly depressed and had been that way for a while. When I delved into the question of why and how to bring that out, that's when Yasira really started to breathe - but it also meant facing up to some of my own low-grade burnout and depression, and was some of the most emotionally difficult character work I've ever done.

TQ:  Does The Outside touch on any social issues?

AH:  Yes, The Outside touches on several social issues. The AI Gods are a vague allegory to real-world religion, and some of the ways in which organized religion can maintain oppression while claiming to help people. Issues of neurodiversity and disability are also at the forefront in this book, since both Yasira and other characters are autistic. In particular there is some brief discussion of abusive childhood therapy, which one of the characters has experienced.

TQ:  Give us one or two of your favorite non-spoilery quotes from The Outside.

Also, any piece of dialogue that Enga ever has.

AH:  I'm hoping Angry Robot will greenlight a sequel for THE OUTSIDE, though nothing's fully worked out yet. In the meantime, I'm also working on a draft of a contemporary fantasy novel involving dragon paleontology.

AH:  My pleasure! Thanks for having me. 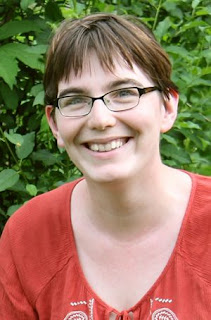 ADA HOFFMANN is a Canadian graduate student trying to teach computers to write poetry. Her acclaimed speculative short stories and poems have appeared in Strange Horizons, Asimov’s, Uncanny, and two year’s best anthologies. Ada was diagnosed with Asperger syndrome at 13, and is passionate about autistic self-advocacy. She is a former semi-professional soprano, a tabletop gamer and an active LARPer, she lives in southern Ontario with a very polite black cat.