The Andromeda Evolution Coming in November 2019


HARPERCOLLINS PUBLISHERS ANNOUNCES THE PUBLICATION OF
THE ANDROMEDA EVOLUTION,
THE SEQUEL TO MICHAEL CRICHTON’S
WORLDWIDE BESTSELLING NOVEL THE ANDROMEDA STRAIN 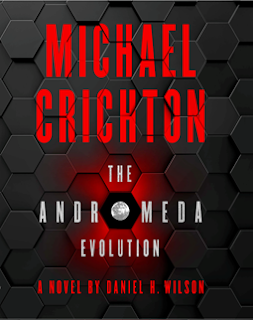 New York, NY (February 2019) HarperCollins Publishers is thrilled to announce the publication of THE ANDROMEDA EVOLUTION, the sequel to Michael Crichton’s groundbreaking techno-thriller, THE ANDROMEDA STRAIN. The novel, a collaboration between CrichtonSun LLC and bestselling sci-fi author Daniel H. Wilson, will be published on November 12, 2019 by Harper US, UK and Australia simultaneously.

On the 50th Anniversary of THE ANDROMEDA STRAIN, the novel that made Michael Crichton a household name — and spawned a new genre, the technothriller — the threat returns, in a gripping sequel that is terrifyingly realistic and resonant of the original.

“It’s hard to believe that half a century has passed since the publication of THE ANDROMEDA STRAIN, particularly as the fears at the book’s core remain in the forefront of our collective consciousness; the title itself has become part of our culture – a shorthand for any global pandemic. Harper could not be more excited to publish the continuation to the book that launched Michael Crichton’s career,” said Harper President & Publisher Jonathan Burnham.

“Michael’s first benchmark novel, THE ANDROMEDA STRAIN, was ahead of its time in both subject matter and how it was presented to the reader,” said Sherri Crichton, CEO, CrichtonSun LLC. “It's exciting to be shining a spotlight on the world that Michael so brilliantly created and to collaborate with Daniel Wilson. This novel is for Crichton fans; it’s a celebration of Michael’s universe and a way to introduce him to new generations, and to those discovering his worlds for the first time.”

"As a lifelong fan of Michael Crichton, it’s been an unbelievable honor to revisit the iconic world that he created and to continue this adventure,” said Wilson. “It's a testament to Crichton's genius that the originality of The Andromeda Strain is just as exciting and relatable now as it was on the day it was first published."

Michael Crichton (1942-2008) was the author of the best selling novels The Terminal Man, The Great Train Robbery, Jurassic Park, Sphere, Disclosure, Prey, State of Fear, Next and Dragon Teeth among many others. His books have sold more than 200 million copies worldwide, have been translated into thirty-eight languages, and have provided the basis for fifteen feature films. He wrote and directed Westworld, The Great Train Robbery, Runaway, Looker, Coma and created the hit television series ER. Crichton remains the only writer to have a number one book, movie, and TV show in the same year.

Daniel H. Wilson is a Cherokee citizen and author of the New York Times bestselling Robopocalypse and its sequel Robogenesis, as well as ten other books, including How to Survive a Robot Uprising, Guardian Angels & Other Monsters, and The Clockwork Dynasty. He recently wrote the Earth 2: Society comic book series for DC Comics. In 2008, Wilson hosted "The Works," a television series airing on the History Channel that uncovered the science behind everyday stuff. He earned a PhD in Robotics from Carnegie Mellon University, as well as Masters degrees in Artificial Intelligence and Robotics. He has published over a dozen scientific papers and holds four patents. Wilson lives in Portland, Oregon.


ABOUT HARPERCOLLINS:
HarperCollins Publishers is the second largest consumer book publisher in the world, with operations in 17 countries. With two hundred years of history and more than 120 branded imprints around the world, HarperCollins publishes approximately 10,000 new books every year in 16 languages, and has a print and digital catalog of more than 200,000 titles. Writing across dozens of genres, HarperCollins authors include winners of the Nobel Prize, the Pulitzer Prize, the National Book Award, the Newbery and Caldecott Medals and the Man Booker Prize. HarperCollins, headquartered in New York, is a subsidiary of News Corp (NASDAQ: NWS, NWSA; ASX: NWS, NWSLV) and can be visited online at corporate.HC.com.

ABOUT CRICHTONSUN:
CrichtonSun LLC is a publishing, motion picture and television production company founded by Sherri Crichton. It is the home of the Michael Crichton Archives, with a legacy of novels, non-fiction work, speeches, film scripts and television series the visionary left behind. Michael re-defined science-fiction into science fact, explored history and things yet to come, transforming the vision of science capabilities, past, present and future. Sherri Crichton and her producing partner Laurent Bouzereau continue Michael’s legacy through a variety of exciting projects, across all platforms, bringing his voice into the 21st Century and beyond.
Posted by Qwill at 6:00 AM