Interview with Micah Dean Hicks, author of Break the Bodies, Haunt the Bones


Please welcome Micah Dean Hicks to The Qwillery as part of the 2019 Debut Author Challenge Interviews. Break the Bodies, Haunt the Bones was published on February 5, 2019 by John Joseph Adams/Houghton Mifflin Harcourt. 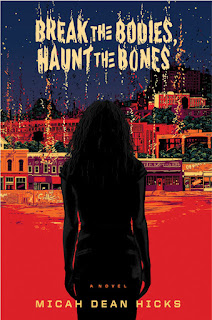 Micah:  As far back as I can remember, I’ve been writing stories. I’m not sure if this is the first, but when I was in middle school, I wrote a story about a group of thieves who lived in a forest, and each of them played a different musical instrument. There was the flute thief, the drum thief, the horn thief. And all of their instruments were magical somehow. It was sort of a cross between Robin Hood and The Legend of Zelda. Maybe I should do something with that idea...

Micah:  Definitely a plotter. I don’t always stick to the plan once I’m writing, but having an outline makes everything much easier for me.

Micah:  Like a lot of people, making time is always a battle. There are chores to do, meals to make, dishes to clean, and clothes to fold. I work full time teaching at a university, which is really rewarding but also busy. Every day, I have to fight to make writing a priority, or writing won’t happen.

Micah:  Too many books, songs, games, movies, and paintings to name them all, but my biggest influence is probably fairy tales. Something about the danger of the forest, the odd things you might find there, really resonated with me as someone who grew up right at the edge of the woods.

TQ:  Tell us something about Break the Bodies, Haunt the Bones that is not found in the book description.

Micah:  In addition to ghosts haunting pretty much everything, the book also has a lovesick robot, a girl who has never lost at anything, and a pig boy named Dennis who just wants to dance.

TQ:  What inspired you to write Break the Bodies, Haunt the Bones? What appeals to you about writing Contemporary Fantasy?

Micah:  Several things kind of converged in my mind. I’ve always liked how wild and energetic the anime FLCL is, how playful it is with genre. When I came across Jason Chan’s series of illustrations The Neighbors—featuring a boy inventor, an alien father figure, a girl whose drawings come to life, and a house that seems built out of a spaceship—I knew I wanted to do something big and ambitious and genre-bending like that.

I like how contemporary fantasy injects strangeness and wonder into the world. That more than anything else is probably what draws me to this genre.

TQ:  What sort of research did you do for Break the Bodies, Haunt the Bones?

Micah:  The book deals a lot with racism and economic decline. Growing up in rural southwest Arkansas, I was surrounded by both my entire life. A lot of the other research that went into the novel ended up coming to me. As a millennial, our generation is partly defined by economic uncertainty. And during the six years that I worked on this story, social media was on fire with cell cam footage of police killing innocent black people. I can’t imagine having written this book without those things being a part of it.

I also wanted to be careful with how I portrayed characters from very different backgrounds than mine. I did a lot of reading to see how to write about others ethically, but the best resource I came across was Nisi Shawl and Cynthia Ward’s book Writing the Other. Every fiction writer should read it.

TQ:  Please tell us about the cover for Break the Bodies, Haunt the Bones.

Micah:  Chris Thornley did a killer job on the cover art. The cover shows my main character Jane looking off toward the haunted and abandoned downtown of Swine Hill, a place swarming with ghosts.

TQ:  In Break the Bodies, Haunt the Bones who was the easiest character to write and why? The hardest and why?

Micah:  Jane and Henry were probably equally hard to write but in different ways.

Jane is most different from me. She’s in this really difficult position where she’s the only thing holding her family together. She’s intensely loyal, even to people who hurt her, even to her father who has forgotten everything and become a shadow of a person. Jane is the only one who refuses to give up on him. I’m a lot more selfish than she is.

Henry is more similar to me, but in all the worst ways. He has the same obsession towards his work and desire to be great. But Henry is willing to put his ambitions ahead of the well-being of others. Slipping into his character was maybe easier, but it also made me think about all the ways in which I’m not a perfect person.

TQ:  Does Break the Bodies, Haunt the Bones touch on any social issues?

TQ:  Which question about Break the Bodies, Haunt the Bones do you wish someone would ask? Ask it and answer it!

Because chicken people would be horrifying!

TQ:  Give us one or two of your favorite non-spoilery quotes from Break the Bodies, Haunt the Bones.

“The wind from its fall rippled Bethany’s hair and shirt. The alien spark was basketball-sized, the sound of it shattering, like lightning sliding across lightning. Bethany stared up as it fell. While Henry called to her from the window, waiting for the impact that would surely annihilate them in a tidal wave of heat and light, Bethany did what she had always done when a ball fell within reach of her hands. She raised her arms and caught it.”

Micah:  I’m finishing a collection of short stories, many of which have already been published in various magazines. They’re dark, sad stories that borrow a lot from fairy tale motifs. Birds who get turned into boys and regret it. A woman with beautiful clockwork hands who has to live alone so that people won’t steal them. Two sisters who find an old oven than can bring the dead back to life.

Micah:  Thank you for the great questions!

Swine Hill was full of the dead. Their ghosts were thickest near the abandoned downtown, where so many of the town’s hopes had died generation by generation. They lingered in the places that mattered to them, and people avoided those streets, locked those doors, stopped going into those rooms…They could hurt you. Worse, they could change you.

Jane is haunted. Since she was a child, she has carried a ghost girl that feeds on the secrets and fears of everyone around her, whispering to Jane what they are thinking and feeling, even when she doesn’t want to know. Henry, Jane’s brother, is ridden by a genius ghost that forces him to build strange and dangerous machines. Their mother is possessed by a lonely spirit that burns anyone she touches. In Swine Hill, a place of defeat and depletion, there are more dead than living.

When new arrivals begin scoring precious jobs at the last factory in town, both the living and the dead are furious. This insult on the end of a long economic decline sparks a conflagration. Buffeted by rage on all sides, Jane must find a way to save her haunted family and escape the town before it kills them

MICAH DEAN HICKS is the author of the story collection Electricity and Other Dreams, a book of dark fairy tales and bizarre fables that won the 2012 New American Fiction Prize. He is also the winner of the 2014 Calvino Prize judged by Robert Coover, the 2016 Arts and Letter Prize judged by Kate Christensen, and the 2015 Wabash Prize judged by Kelly Link. His stories and essays have appeared in dozens of magazines, ranging from the New York Times Magazine to Lightspeed to the Kenyon Review. He teaches creative writing at the University of Central Florida in Orlando.