Please welcome Joe Ollinger to The Qwillery as part of the 2019 Debut Author Challenge Interviews. 10,000 Bones is published on February 5, 2019 by Diversion Books. 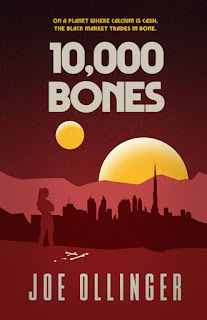 The Qwillery:  Welcome to The Qwillery. What is the first fiction piece that you remember writing?

Joe Ollinger:  Hmm… The earliest I can remember is a story I wrote in second or third grade as part of a class assignment. I overdid it and wrote this long story about an alien invasion that ended with Earth being destroyed and the protagonist waking up on a space station.

JO:  I’m mostly a plotter, but sometimes when I get stuck with my outlines, I like to start writing scenes before the outline is 100% done.

JO:  The hardest thing for me, and the thing I worry about the most, is figuring out will connect with people. It might be the most fundamental thing about storytelling, the goal of relating to others. I’m constantly asking myself, “Is this something people will find interesting?” It’s the scariest part, never knowing the answer to that.

JO:  My literary influences are too many to list without being unfair to a lot of authors. My favorites were always the sci-fi greats: Asimov, Clarke, Dick, Heinlein, Niven. In more general terms, I love telling stories, solving problems, and losing myself in other worlds and experiences. Writing allows me to immerse myself in all three of those things. Fiction is fantasy, in that in good fiction, life makes sense. (Of course there are some exceptions, such as Franz Kafka’s books.) Good fiction is built on cause and effect, if not a traditional sense of justice. Life is not like that. Our world often doesn’t make sense, and that’s frightening. Reading and writing fiction is an escape from that. But it’s not just an escape – it gives us a way to look at our lives within a framework of causation and goals and struggle. It reinforces a rational worldview. So for me writing is either a compulsive exercise to maintain sanity, or it’s an egotistical attempt to impose my own framework of meaning upon the reader. Or both.

JO:  Calcium is money. Get bones.

TQ:  Tell us something about 10,000 Bones that is not found in the book description.

JO:  After introducing the world and the basic premise, there’s not much room for the emotional elements of the story. Taryn’s investigation forces to confront her conflicted relationship with her world. There’s also a bit of a will-they-or-won’t-they romance subplot.

JO:  The first inkling was a desire to write something about the nature of money, and the spark that made it seem like a promising idea was connecting the currency to the human body in a visceral, physically tangible way.

JO:  I had to start with basic stuff. How much calcium is in a human body? What is the most efficient way to administer calcium to the human body? What are the symptoms of a calcium deficiency? How do you extract calcium from organic tissue and what kind of costs are associated with that? Then there was some math and price setting. How many human bodies does a Collections Agent track down in a year? How much calcium is she collecting from other sources? What is a reasonable percentage for the Commerce Board to pay her, and how does that add up to a yearly pay that makes sense in this economy? How much does she have to save to be able to afford an interstellar ticket? Needless to say, I had to do some math. I also went down some rabbit holes, like the Big Mac index and the effects of economic sanctions on countries like Iran and North Korea.

JO:  I won’t say that the image depicted on the cover definitively does not happen in the story, but I don’t think the goal was to depict any specific scene. I think it does a good job of conveying the kind of world the reader is getting into: alien, desolate, but also urban and futuristic. The bones in the foreground subtly hint at the book’s subject matter. And I like the retro, minimalistic look my publisher Diversion Books went with. It’s got a kind of Sergio Leone ruggedness ad evokes some 1970s-style grit.

TQ:  In 10,000 Bones who was the easiest character to write and why? The hardest and why?

JO:  Each character was a unique challenge. Taryn was fairly easy, because I really wanted her internal, emotional struggles to relate directly to the story and the world. That narrowed things down a little and helped shape her backstory. She was the starting point. The hardest may have been Brady Kearns. I won’t spoil too much, but I wanted to hint at him being a love interest for Taryn and also hint that he may not be everything he says he is, so writing him involved walking some fine lines.

JO:  The questions the book raises about currency as a source of power – an end and a means to an end – are no big secret. Readers will draw different answers and will have different takes on those issues, so I don’t want to stamp my own opinion on anything outside of what’s in the text.

TQ:  Which question about 10,000 Bones do you wish someone would ask? Ask it and answer it!

JO:  Hmm... Mostly I just hope people read the book. While I have no definite plans for a sequel at this point, I’ll be thrilled if people read 10,000 Bones and want to know more.

TQ:  Give us one or two of your favorite non-spoilery quotes from 10,000 Bones.

JO:  It’s a little bit spoilery, but I did get in a dig at my own day job:
“You don’t blow up a lawyer’s office for fun.”
“How many lawyers have you met?”

JO:  10,000 Bones was part of a two-book deal with Diversion. The second book will be a contemporary thriller with a speculative twist. We’re still somewhat early in the process for that, and the publication date is yet to be announced, but I’m excited about it.

Fast-paced and thought-provoking, Joe Ollinger has written a debut science fiction novel that reads like a thriller and will be loved by fans of Paolo Bacigalupi and Richard Morgan.

On the planet Brink, calcium is cash. The element’s scarcity led the world’s government to declare it the official currency. In the decades since, the governments of other colonized worlds have suppressed shipments of calcium in order to maintain favorable exchange rates, while Brink’s Commerce Board has struggled to negotiate importation quotas to keep the population alive and growing.

Taryn Dare is a Collections Agent, a specialized detective tasked with finding black market calcium and recovering it, so that the Commerce Board can recycle it and distribute it as currency. Taryn is fueled by one goal: to save up enough currency units for a one-way ticket to a better world. But when a job recovering a human corpse uncovers a deadly conspiracy in the system, Taryn is drawn into an investigation that may threaten her life, and the very fabric of her society. 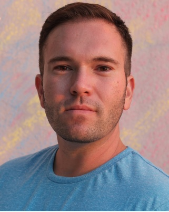 Joe Ollinger grew up in a small swamp town in Florida. After graduating from the University of Southern California, he worked for several years as a reader and story analyst for an Academy Award Winning Filmmaker. Currently residing in Los Angeles, he works as an attorney when he's not writing.