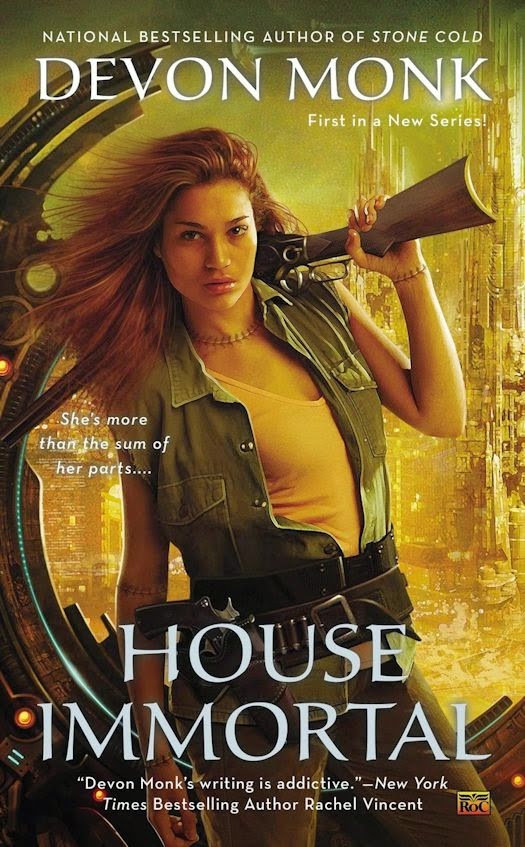 Having read two other series by Devon Monk, I was intrigued by this entry in a new world. As mentioned in the description, Matilda is a “stitch” – a creature made of various parts stitched together with an invention called “life thread.” Tilly thinks she and the other creatures on her farm are alone in the world, remnants of her father’s experimentations. However, she discovers Abraham Seventh and eleven other members of the “galvanized,” who also are stitches. While they are incredibly strong, they are virtually slaves to the masters of their Houses.

Having been raised by her family on the farm, Tilly is totally ignorant of life in the cities. The little that she knows about the Houses has taught her that they are not to be trusted and that they are a threat to the more individualized farming communities that make up House Brown. Tilly is a proponent of House Brown and works in secret to keep them protected from the city Houses. However, it quickly becomes obvious that as a galvanized, Tilly represents a threat to the Houses so long as she is unaffiliated, and she cannot be affiliated with House Brown. So she must choose among the other nine houses to determine which House can protect her, her grandmother, and her farm.

Abraham, of course, has his own opinion about which House would best benefit Tilly, and he advises her accordingly. But the other Houses are not content to leave her to her own decision, and some of them take drastic steps to influence her, including kidnapping her. Since one of the Houses sent men to kill her father and another House may be holding her brother hostage, Tilly finds it difficult to trust any of them. Ultimately, she makes her choice and heads off to the annual Gathering, where the Houses “gather and pose and position for who will wield the most power in the next year” (page 199).

I found this an interesting commentary on the world’s resources and the politics that might ultimately result when those resources become even scarcer than they already are. In Monk’s world, the governments came together, consolidated the resources, and then assigned the authority into the hands of ten separate Houses. Those Houses jostle and scheme about which particular resource is more critical for any particular year. Using the galvanized to fight to make those determinations about the ranking of the resources was an interesting twist.

I also liked the relationship between Tilly and Abraham, as well as between her and the other galvanized. Rather than being all similar, each galvanized is very different and distinct from one another. In addition, the curious creatures on the farm are especially interesting. Crocboars have three-foot tusks and a long snout lined with crocodile teeth. The dragon is made up of iguana, crocodile, and kimono, has four legs and four wings, and is the size of a house. Pony instead has the hind end of a zebra, the middle/neck/head of a horse, four chunky bison legs, and a whimsical unicorn horn in the center of its head. The leapers are actually tree octopuses that love apples. Each of these, like Tilly herself, was stitched together by Tilly’s father, who apparently had a creative mind. It is Monk herself that is so creative.

Altogether, House Immortal was a quick read, with action, adventure, and romance to boot. I can hardly wait to read the next novel in this interesting series. 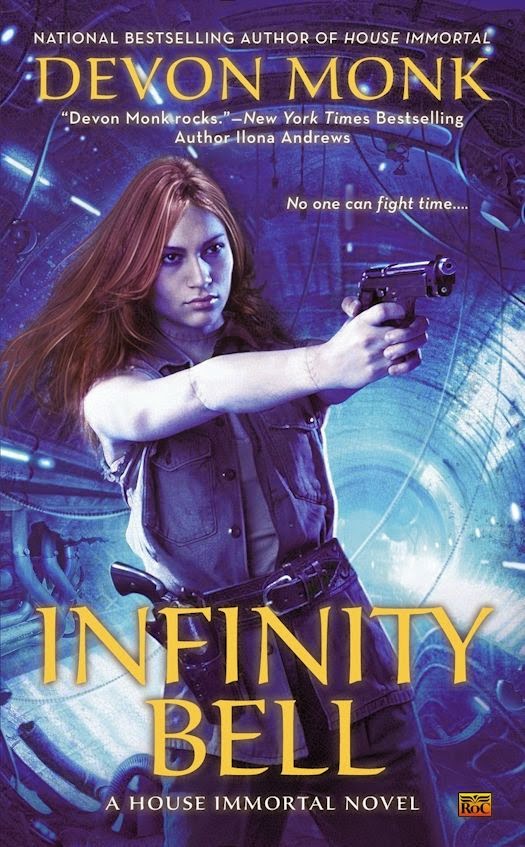 
You may see a Spotlight and Giveaway for The House Immortal Novels by Devon Monk here.  The Giveaway is included here again for your convenience. Please note that if you've already entered you will not be able to enter again at this post.

What:  One entrant will win Mass Market Paperback copies of House Immortal and Infinity Bell by Devon Monk from the publisher. US ONLY

Who and When:  The contest is open to all humans on the planet earth with a US mailing address. Contest ends at 11:59 PM US Eastern Time on March 22, 2015. Void where prohibited by law. No purchase necessary. You must be 18 years old or older to enter.