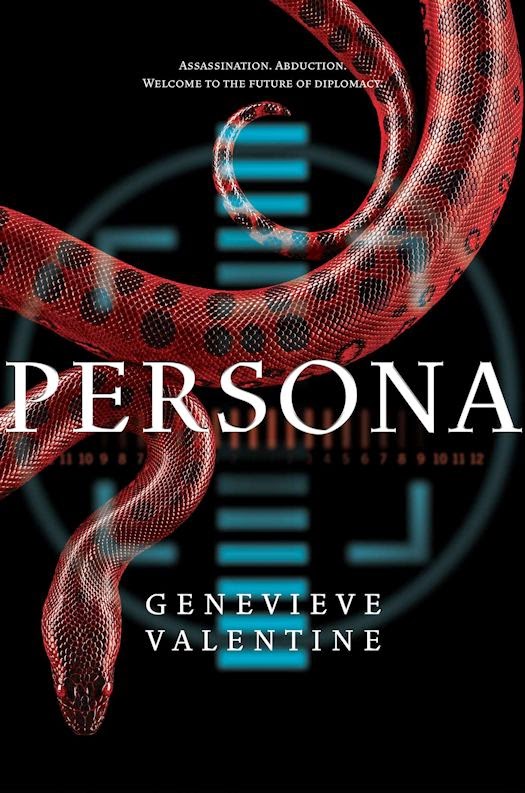 In a world where diplomacy has become celebrity, a young ambassador survives an assassination attempt and must join with an undercover paparazzo in a race to save her life, spin the story, and secure the future of her young country in this near-future political thriller from the acclaimed author of Mechanique and The Girls at Kingfisher Club.

When Suyana, Face of the United Amazonia Rainforest Confederation, is secretly meeting Ethan of the United States for a date that can solidify a relationship for the struggling UARC, the last thing she expected was an assassination attempt. Daniel, a teen runaway turned paparazzi out for his big break, witnesses the first shot hit Suyana, and before he can think about it, he jumps into the fray, telling himself it’s not altruism, it’s the scoop. Now Suyana and Daniel are on the run—and if they don’t keep one step ahead, they’ll lose it all.

Persona is a political thriller set in a near future world wherein all diplomacy is conducted at the International Assembly (IA). Each country (or country alliances) is represented by a Face. Each Face is carefully chosen and then groomed. Each Face has a handler. Each Face fits carefully into what appears to be a preset hierarchy based on the importance of the country represented. Sometimes a Face just has to be pretty or handsome and vote the way they are instructed. Other Faces appear to wield more power and may actually be policy makers. The IA is headquartered in Paris which is where Persona takes place.

Persona is the story of Suyana Supaki, who is the Face of United Amazonia Rainforest Confederation (Peru and Brazil) and is from Peru, and Daniel Park, a Korean snap (paparazzo), whose lives collide when an attempt is made to assassinate Suyana. The novel flips back and forth from their perspectives, but leans more heavily to the narrative about Suyana. After Suyana is shot she is on the run and needs to rely on Daniel at least for a while. We learn about Suyana's past (and Daniel's too) through a series of flashbacks.

A persona is "the personality that a person (as an actor or politician) projects in public :  image (Merriam-Webster Dictionary). Persona is such an apt title for this novel. Everyone is projecting an image of one sort or another and what lies beneath is often surprising. No one in Persona is really who they seem to be. Someone has tried to kill Suyana and she needs to stay alive long enough to figure out who and why. Suyana is much smarter and savvy than even her handler knows. She takes calculated risks and some risks that she does not want to take but must. I really enjoyed watching her mind work. She's not perfect; she makes mistakes, but she is incredibly admirable, clever, intelligent, and mentally strong. Getting to know Suyana over the course of the novel is exhilarating.

Daniel was just trying to get a scoop and witnessed Suyana's shooting. He is always questioning why he is helping her. He tells himself it's for the photos, but it seems to be much more than that. His journey through Persona is as interesting as Suyana's. They form a very unlikely pair.

In addition to Suyana and Daniel there is a strong cast of supporting characters all of who surprised me in one way or another. Additionally, Valentine treats the reader to chases through Paris, advanced technology and a well-crafted political system.

The ending of Persona is much more than satisfying. It's actually wonderful. Persona is a beautifully written political thriller with a standout heroine in the fascinating Suyana Supaki.

What:  One entrant will win a copy of Persona by Genevieve Valentine from the publisher. US ONLY

Who and When:  The contest is open to all humans on the planet earth with a US mailing address. Contest ends at 11:59 PM US Eastern Time on March 21, 2015. Void where prohibited by law. No purchase necessary. You must be 18 years old or older to enter.