Guest Blog by Christy Fifield - The Day I Became a Mystery Writer - and Review and Giveaway of Murder Ties the Knot - March 10, 2015


Please welcome Christy Fifield to The Qwillery. Murder Ties the Knot (A Haunted Souvenir Shop Mystery 4) was published on March 3rd by Berkley 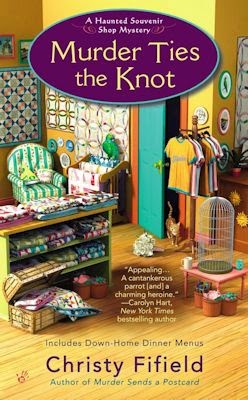 The Day I Became a Mystery Writer

A few weeks ago my husband and I were watching the movie The Equalizer. It's based on the 1980s television series of the same name, about Robert McCall, a man with skills and contacts who helps people that the system can't. Or won't.

I won't argue the merits of the film, but I can say it starred Denzel Washington, and I will pretty much watch everything that man does.

Anyway, the big climactic battle is set in a home improvement store. One of those big boxes like Home Depot or Lowe's. In a nutshell, our hero works there, the bad guys take over the store at closing time and hold his fellow employees hostage, he uses his familiarity with the store and its merchandise to defeat the bad guys and free the hostages.

Nothing really new or unusual in that scenario, we've seen similar stories many times. In fact, some critics drew parallels between his actions and the antics of Kevin in Home Alone. (Not having ever seen Home Alone, I can't address the legitimacy of those comments.)

But somewhere in the middle of that scene, as Denzel was taking out the baddies using barbed wire, construction tools, and hedge clippers, my husband and I turned to each other with the same thought.

"Remember our conversation in Fred Meyer?" I asked with a laugh.

He nodded and grinned. "I think that's the day you became a mystery writer."

I hadn't really thought of it that way. I sat there for a moment, the proverbial light bulb glowing over my head, and considered what he'd said. "I think you're right."

So let me tell you the story of the day I became a mystery writer.

Several years back, long before I wrote my first mystery novel, my husband and I were in Fred Meyer. In the garden section there was a display of garden tools, a system of poles and attachments that included sharply pointed rakes and some wicked-looking soil aerators.

Steve picked up one of the aerators and commented that it would make a nasty murder weapon. I agreed.

About that time we heard this rather timid voice from around the end of the aisle. "I heard that," the young man said.

"It's okay," Steve answered, sticking his head around the corner. "We're writers."

The guy nodded, but we could see him sizing us up. We're pretty sure he was trying to remember our faces, so he could identify us when we showed up on America's Most Wanted.

We laughed it off and went on our way, but I now realize that in that moment I looked at the world differently. I saw the possibilities in those tools, uses the designers and manufacturers certainly hadn't intended for their merchandise.

I think this is one of the hallmarks of a creative mind, that ability to look beyond the intended consequences, the way things are supposed to be, the roles people are allowed to play, and to see other possibilities.

It's something we do naturally as small children. Give a little kid a box and it becomes a plane, a car, a house, a tiger cage, a hiding place. It becomes a million things, none of them just a box for putting things in. A blanket draped over a table can be a fort, a cave, a playhouse, a hospital. The creative mind of a child doesn't know limits. They learn those later.

Becoming a writer—or taking up any creative endeavor—means UN-learning those limits. It means, in the words of a dear friend and very wise woman, you need to release your "inner two-year-old."

I am secretly (well, not so secretly now that I've told you!) delighted to have permission to explore those possibilities in the books I've written and the books I have yet to write; to see beyond the intended use of a garden tool, or a fish tank, or a coat hanger, and find new ways of using them to tell a story.

I hope you'll come and join me in exploring those stories. I'll be right over here in my blanket fort. 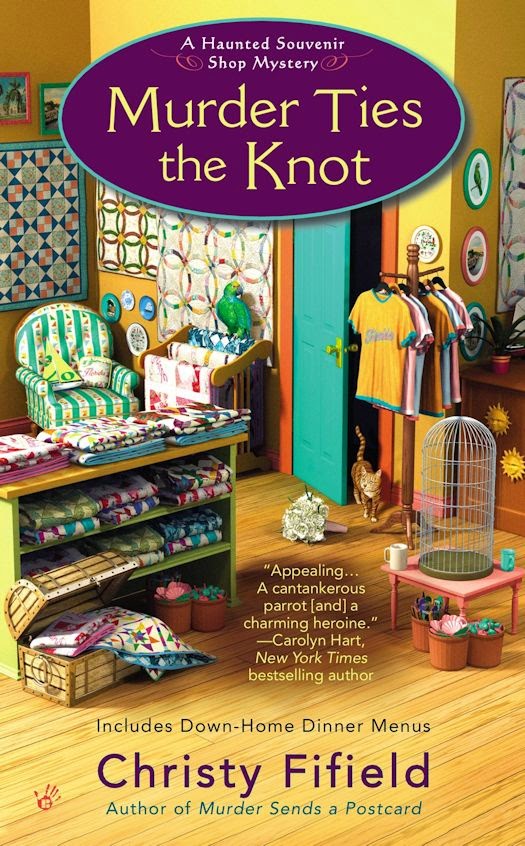 A Haunted Souvenir Shop Mystery from the author of Murder Sends a Postcard–featuring Down-Home Dinner Menus.

It’s winter in Keyhole Bay, Florida, and while the tourist trade is slow, souvenir shop owner Glory Martine is busy with her best friend’s wedding. But between managing preparations, the bride’s in-laws, and a haunted parrot named Bluebeard, Glory makes plans to catch a killer.

As her friends Karen and Riley approach their wedding day, Glory could use a break from the nuptial madness. She takes a peaceful drive to Alabama’s piney woods to pick up the wedding quilt she ordered from a supplier. But the supplier, Beth, has disappeared along with the quilt and her husband, Everett.

Glory learns that two men were found murdered near Beth and Everett’s home and that the couple is wanted for questioning. Believing they are innocent, Glory convinces them to cooperate with authorities. But when they’re thrown in jail, Glory vows to catch the real killer before one happy couple walks down the aisle and another gets sent up the river.

Murder Ties the Knot, the 4th Haunted Souvenir Shop Mystery, struck me as a different sort of cozy mystery. Glory Martine owns a souvenir shop (Southern Treasures) in Keyhole Bay, Florida. Keyhole Bay is a small town in the Florida Panhandle; the kind of small town where everyone knows each other. Glory and her friends seem so much more important than the mystery. Murder Ties the Knot focuses much more on relationships - between friends, between children and parents, between people in love.

Glory's friends are wonderful - her best friend Karen (a reporter) who is about to remarry Riley; Ernie and Felipe, a couple who owns Carousel Antiques; and Jake, the owner of Beach Books and Glory's boyfriend. Fifield does not let her characters stagnate - they grow and change, make mistakes, recover, move along in relationships. Most of all they support each other. Their friendships are incredibly realistic. I would love to be invited to one of their weekly Thursday night dinners. Glory is such a wonderful character. She's a good friend and a businesswoman who deals with real business issues. There are big changes in store for almost all of Glory's friends and Glory herself which I won't go into because it's fun watching the events unfold.

Fifield raises social issues in Murder Ties the Knot. I find this refreshing in a cozy mystery and at no point did raising these issues overwhelm the story. And yes, there is a murder mystery that ends up involving a lot of the characters but for different reasons. 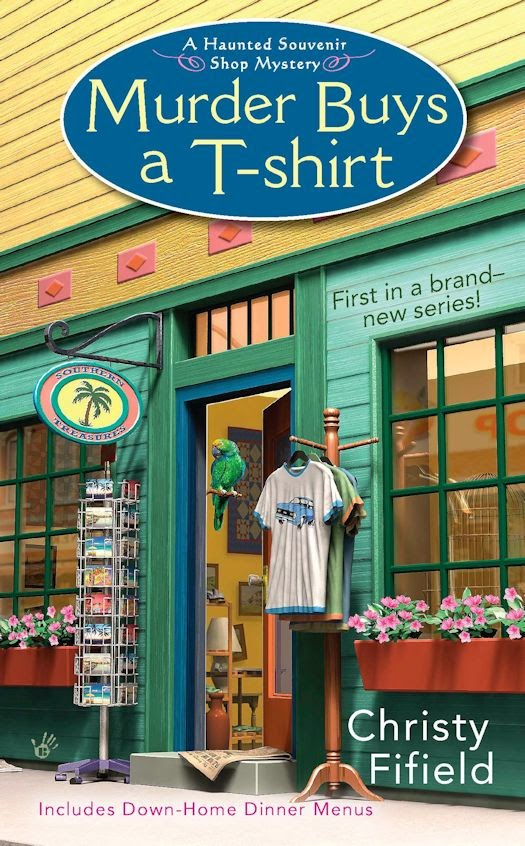 Glory Martine has inherited her uncle's Florida souvenir shop, one stuffed with collectibles, mementos of times gone by--and ghosts--who, like her customers, refuse to let go of the past. But things take an even more unexpected turn when a local football hero dies far too suddenly and suspiciously. Now, Glory has to uncover the truth before someone makes her history... 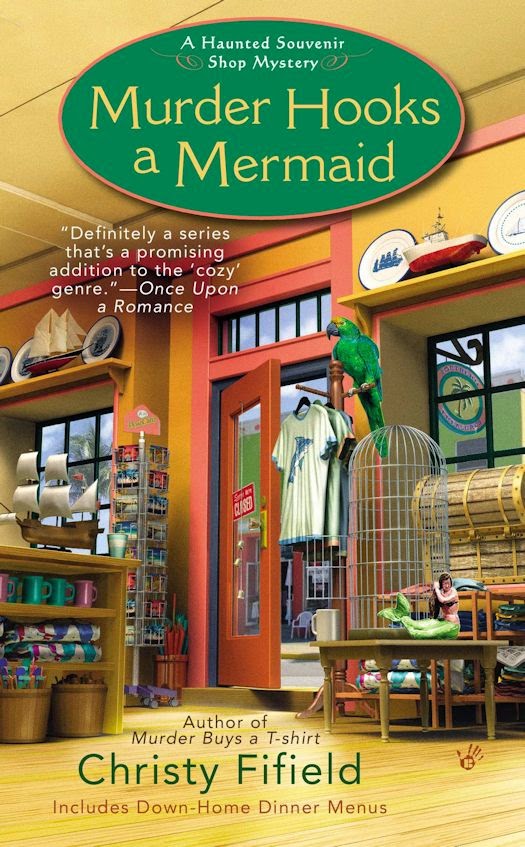 Nestled in Keyhole Bay, Florida, Glory Martine’s souvenir shop, Southern Treasures, is supposed to trap tourists—not ghosts. But a possessed parrot may be just what Glory needs to solve a murder...

Inheriting her great-uncle Louis’s bayside souvenir shop should have been a breeze for Glory. Instead it’s been one headache after another—with a lot of them generated by Bluebeard, a parrot with a mouth like a sailor and a personality a lot like her late great-uncle. But Glory’s troubles pale in comparison to those of her best friend Karen, whose ex may still have the personalized key chain to her heart, but whose brother-in-law is about to get locked up.

A diver has been found with a gaff hook in his chest, and Karen turns to Glory to help get her brother-in-law off the hook for his murder. But casting the net for the real killer won’t be easy. Glory and Bluebeard are about to find out that the secrets in Keyhole Bay run deeper than anyone ever imagined… 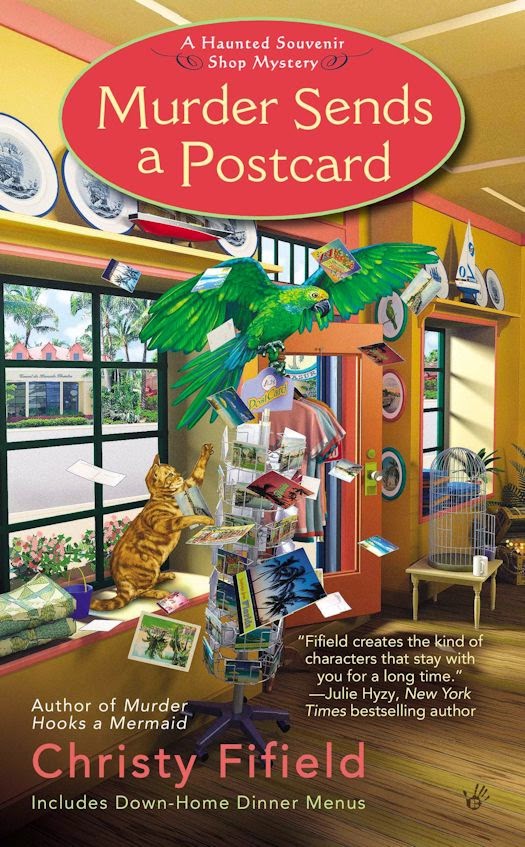 It’s the height of summer tourist season and Glory Martine is busier than ever running her souvenir shop, Southern Treasures. The shop’s parrot, Bluebeard, is becoming quite the celebrity among tourists—little do they realize he’s the bird-host to a ghost…

Residents of Keyhole Bay, Florida, are dismayed when Bridget McKenna, an auditor in chic attire, arrives to assess the local bank’s shady dealings. Curious about the new arrival, Glory brings dinner to Bridget at her temporary residence—the notorious Bayvue Estates, a halted development complex with no view and no estates – just a couple of hastily-completed model homes .

Bridget’s assignment is to figure out where all the money went. But someone wants to keep her in the dark permanently. When Glory finds out her new friend won’t be leaving town alive, she knows she and Bluebeard will have to catch a killer and unravel a financial scandal before it leads to more murderous mayhem… 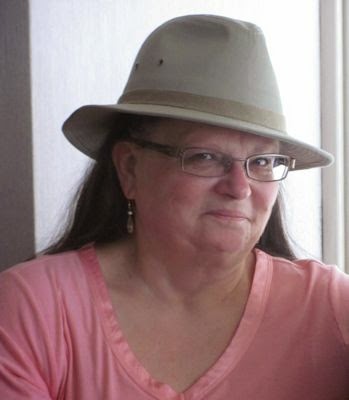 What:  One entrant will win Mass Market Paperback copies of Murder Ties the Knot by Christy Fifield from the publisher. US ONLY

Who and When:  The contest is open to all humans on the planet earth with a US mailing address. Contest ends at 11:59 PM US Eastern Time on March 20, 2015. Void where prohibited by law. No purchase necessary. You must be 18 years old or older to enter.