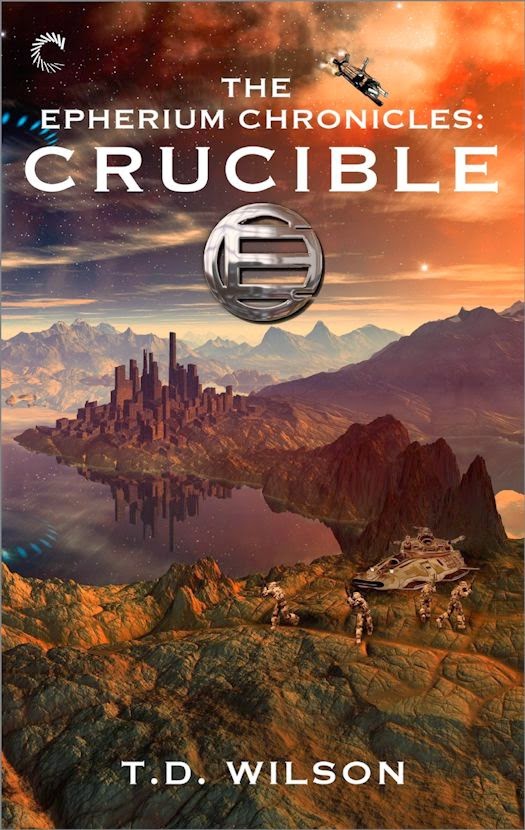 Book two of The Epherium Chronicles

Earth Defense Forces Captain James Hood is on the mission of his life. The Cygni solar system is just one space-fold jump away. One more jump and they'll have reached the fledgling colony that Earth desperately needs if the human race is going to survive. But a plot to derail him has already damaged his ship, threatened the lives of his crew and cost him time. Time the colonists might not have.

So much depends on him now, but Hood's confidence is shaken. It's self-doubt he thought he'd buried, a brutal mind-killer for all military commanders. Yet danger surrounds his team; a brutal insectoid alien race is still out there, intent on eradicating humans, and a greater threat from an unknown, elusive enemy has emerged.

The forces at work on Cygni are like nothing Hood has trained for, tactically or emotionally. When put to the test, he must choose to either trust the unlikeliest of allies, or run and seal the fate of the Cygni colony forever.

Crucible starts off right where book one ends, with the Armstrong damaged and its crew attacked by an unknown enemy from within. They make their way to the planet Cygni to find the Magellan's crew has only just arrived from their 25 year long journey to Cygni weeks before. The fledgling colony has only just started to settle and study their new world when Commander Hood and his crew arrive to protect them from the deadly Cilik'ti.

T.D. Wilson does a great job of starting Crucible with a bang and not letting up throughout the book. The pace starts fast and only increases as we meet new characters and finally meet the Cilik'ti, with all of it ramping up to a colossal war in space and on land.

The characters Wilson created are what make this series for me. Each one is engaging and fleshed out with strengths and weaknesses. Wilson introduces a few more great characters in the second book that blend well with the established cast. One particular Cilik'ti character is one of my favorites in this book. I also enjoyed the new lifeforms on the planet Cygni, they made the world come alive.

The storylines involving the Cilik'ti and colonists are the strongest in this book and wrap up most of the plots that involve them from the first book. Wilson does bring up enough new information to allow the Cilik'ti and Cygni colonists to continue to have a presences in future books. The storyline that deals with the Epherium corporation, their nefarious dealings with the Magellan crew, and the mysterious attacks on the Armstrong at the end of Embrace was not as strong as I would have liked. We learned more about the Embrace program, but it didn't flow as naturally as the main storyline. The mysterious ship/insider attack storyline was hardly touched on at all. This may be due to the fact that Wilson plans to delve into these storylines in future books. I like to see each of the plots an author brings up continue to flow seamlessly through the overall story even if they won't be concluded until future books. Otherwise, I have a tendency to forget about them all together.

This book continued to suffer in the editing. It wasn't as frequent as the first book, but it was still distracting. As was the case in the first book, the strong characters and interesting story kept me focused and engaged enough to look past the minor issues. Unlike the first book, this one had a stronger ending that helped make it feel more complete, even with unresolved plot points.

Crucible strengthens an already engaging series with a wonderful characters and story. I hope Wilson continues to improve as the series progresses. I look forward to see how the world develops and where the crew of the Armstrong goes next. There are acts of violence and mild language. I would recommend it to teens and adults.