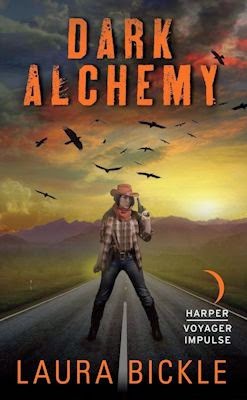 TQ:  Welcome to The Qwillery. What is the most challenging thing for you about writing? Are you a plotter or a pantser?

Laura:  Thank you so much for the chance to chat with you and your readers!

I’m a dyed-in-the-wool plotter. Nothing scares me more than the blank page, so I create a roadmap for where I’m going. It’s my security blanket. I often veer off course and go exploring in the weeds, but I like to have some idea of the shape of the story before I start wrestling with it.

TQ:  Tell us something about Dark Alchemy that is not in the book description.

Laura:  A group of undead ranch hands, the Hanged Men, have been lurking around Temperance for more than a century. They’re the result of a failed alchemical experiment by the town’s founder, who intended to uncover the secret to eternal life. The Hanged Men were inspired by the image of the Hanged Man card in the Tarot, which shows a serene man suspended by a tree from one foot. The meaning of the card deals with suspension and seeing life from another perspective – which is definitely how the Hanged Men view the world.

TQ:  What inspired you to write Dark Alchemy? What appealed to you about writing a genre blending novel? In your opinion, are genre classifications still useful?

Laura:  I love rural fantasy. I think there are always weird things that happen beyond city lights, things that become the subjects of whispers and legends. For me, having grown up in a rural area, it’s an entirely different experience than living in a city. And the weirdness has its own flavor. It’s spooky in a different way – the sky is dark enough to see the stars, your cell phone might not work, and nobody can hear you yell for help. The stakes are different, and it’s a whole other collection of “what if’s” to noodle around.

As for genre… As a former library worker, I know that genre serves a purpose in organizing books in a fashion that allows readers to find what they’re looking for. I really appreciate the ability to go into a library or bookstore and find the kinds of books I want, collected in their own section. Browsing those areas always brings me to new work that I haven’t discovered before. So, I think genre is useful for exploration.

However, I don’t think that genre classifications are useful when there are too many rules about how stories within them must be constructed. Sometimes, I think genres tend to get straitjacketed with expectations about which narrative conventions are adhered to, how the characters relate to each other, and the types of endings that are acceptable. I enjoy blending genres because I feel that I can be freer to experiment without the weight of quite so many requirements. As a writer, I want to play. As a reader, when I pick up a book, I want to be surprised. I want to see something new. And I think that many other readers want that, too.

TQ:  What sort of research did you do for Dark Alchemy?

Laura:  I’ve been accumulating books on alchemy for many years, and I was thrilled to finally be able to put them to good use. The whole history of alchemy is fascinating to me: the intricate symbolism, the obsession with immortality, the idea that rocks could be changed to gold. The theme of this book deals with the first of seven processes in classical alchemy, the calcination process, in which all that is known is reduced to ash in the crucible of the alchemist’s lab.

My husband and I also got the opportunity to visit the Yellowstone area a couple of years ago. It’s a whole different world, broad and deep and gorgeous, and I wanted to explore it in a book. I truly believe that setting is a character in a book, and I really wanted the opportunity to write about this character.

TQ:  Who was the easiest character to write and why? The hardest and why? Which character surprised you the most?

Laura:  I enjoyed writing from Petra’s perspective. She’s a pure skeptic, and it was a lot of fun seeing her react to the craziness that emerges from Temperance. At a certain point, her worldview gets cracked open and she has to develop an entirely new framework for processing the world.

Gabe, the leader of the Hanged Men, was actually pretty difficult to write. When he was alive, he was a Pinkerton agent, working in secret on the 1860s version of The X-Files. I wanted him to be a pretty jaded and pragmatic kind of guy, not prone to undead angstiness. He developed a deadpan sense of humor, which I did not expect.

The character that surprised me the most was Petra’s coyote sidekick, Sig. I meant for him to be a faithful friend, but he has the tendency to steal scenes. He grew into a much larger part than I intended, and I discovered that he’s really the only character who knows the full score in Temperance.

TQ:  Which question about Dark Alchemy do you wish someone would ask? Ask it and answer it!

Laura:  Ha! Well, one question I haven’t been asked is… “Is Sig a coyote, or is he The Coyote with a capital C?”

Yes. Sig is The Coyote. I have some earlier drafts with some scenes from his perspective that have convinced me that there’s a bit of the trickster god in him. I mean…Coyote gets curious, and he wants to see what humans are doing on his land. Why shouldn’t he put on an animal suit and start checking around to see who has lunch meat?

TQ:  Give us one or two of your favorite non-spoilery lines from Dark Alchemy.

Laura:  Hmm! One of my favorites is: “You can stay here if you want…but Alice is going down the rabbit hole.” And another: “Is that coyote wearing a flea collar?”

Laura:  I’ve got a couple of fantasy projects that I’m working on now – I can’t leave the supernatural behind. Stay tuned for more updates!

Laura:  Thank you very much for having me! 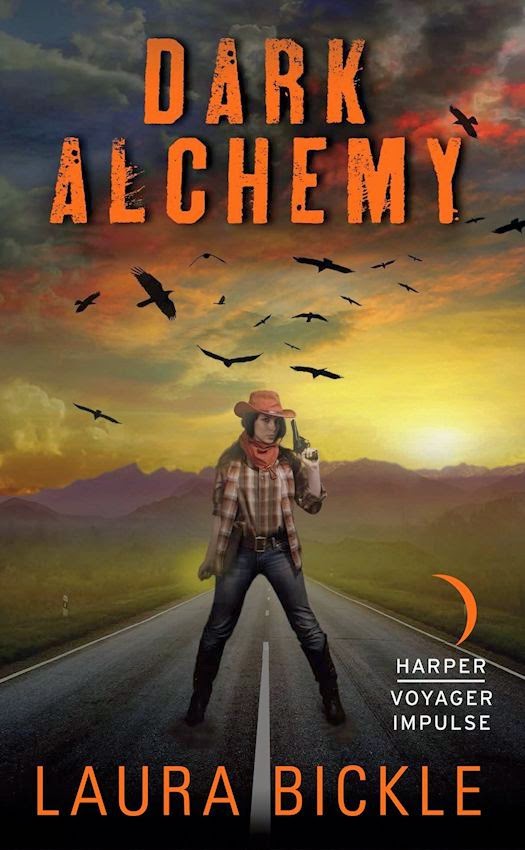 Some secrets are better left buried …

Geologist Petra Dee arrives in Wyoming seeking clues to her father's disappearance years ago. What she finds instead is Temperance, a dying western town with a gold rush past and a meth-infested present. But under the dust and quiet, an old power is shifting. When bodies start turning up—desiccated and twisted skeletons that Petra can't scientifically explain—her investigations land her in the middle of a covert war between the town's most powerful interests. Petra's father wasn't the only one searching for the alchemical secrets of Temperance, and those still looking are now ready to kill. Armed with nothing but shaky alliances, a pair of antique guns, and a relic she doesn't understand, the only thing Petra knows for sure is that she and her coyote sidekick are going to have to move fast—or die next. 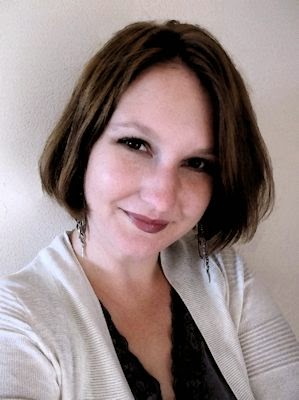 Laura Bickle grew up in rural Ohio, reading entirely too many comic books out loud to her favorite Wonder Woman doll. After graduating with an MA in Sociology – Criminology from Ohio State University and an MLIS in Library Science from the University of Wisconsin-Milwaukee, she patrolled the stacks at the public library and worked with data systems in criminal justice. She now dreams up stories about the monsters under the stairs, also writing contemporary fantasy novels under the name Alayna Williams.

Her work has been included in the ALA’s Amelia Bloomer Project 2013 reading list and the State Library of Ohio’s Choose to Read Ohio reading list for 2015-2016. THE HALLOWED ONES and THE OUTSIDE are her latest young adult novels