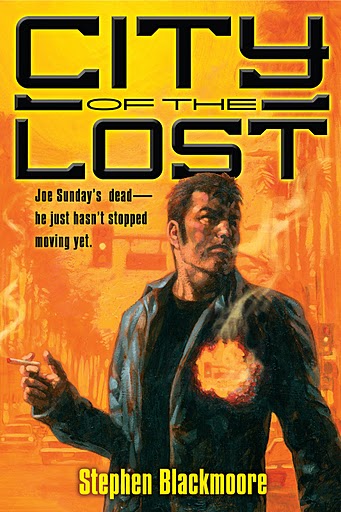 Joe Sunday has been a Los Angeles low-life for years, but his life gets a whole lot lower when he is killed by the rival of his crime boss-only to return as a zombie. His only hope is to find and steal a talisman that he learns can grant immortality. But, unfortunately for Joe, every other undead thug and crime boss in Los Angeles is looking for the same thing.

Take a shot of noir, a shot of supernatural, a shot of mystery, add a dash of levity. Shake. Serve neat and you've got City of the Lost, Stephen Blackmoore's exciting debut novel.

I completely enjoyed City of the Lost. Joe Sunday, the 'hero' is a thug. No two ways about it. But he's a thug with a heart, more or less. When he gets caught up in supernatural shenanigans because of his boss, Simon, things really go sideways for him. He's turned into a sentient zombie...with an expiration date. He's got to figure out what's going on, who to trust, and how to save himself and Los Angeles at the same time.

I really like Joe. He's a bad guy who's easy to like, which continually amazed me. Despite his profession, he's got his own sense of honor. He'll often do the right thing... under the circumstances. Joe is a great noir anti-hero. You know, the bad guy who is also heroic.

While Joe is the central figure, Mr. Blackmoore does a great job fleshing out the rest of the cast of memorable characters in City of the Lost. It's quite a collection of characters too, some of whom I hope to see again in further novels. Stephen Blackmoore is particularly adept at writing dialog. He captures the back and forth conversational patter that I would expect to find in a noir-infused novel. It is a pleasure to read.

City of the Lost is fast-paced, sometimes gory (Joe is a zombie), sometimes amusing, and always well-written. It will keep you on your toes and you will enjoy being there. I suggest you set out a block of time for reading because once you start City of the Lost you are not going to want to put it down.

I give City of the Lost 5 Qwills.

Read Stephen Blackmoore's 2012 Debut Author Challenge Guest Blog - Our Lady of the Shadows - here. Look for an interview with Stephen later this week.
Posted by Qwill at 10:32 AM