Please welcome David Tallerman to The Qwillery as  part of the 2012 Debut Author Challenge Interviews. Giant Thief, David's debut novel, is out today in the US and Canada. Happy Release Day to David!

David:  I don't know if it's a quirk as such, but I don't seem able to stick to any one genre or medium. On top of the novels and short fiction, I've written comics, reviews, poetry and film scripts, and genre-wise I've covered sci-fi and fantasy, horror, crime and what I suppose you'd have to call literary fiction. I've got wide reading tastes, and whatever I like I seem to need to try my hand at.

David:  Favourite writers? Off the top of my head and in no particular order, H. G. Wells, Geoffrey Household, Lewis Carroll, Gene Wolfe, H P Lovecraft, Philip K Dick. Currently, I love Charlie Huston's crime fiction, and just about anything Mike Carey writes. Most recently, I picked up the first of Adrian Tchaikovsky's Shadows of the Apt series as a small thank you for the fantastic blurb he gave me and now I'm hopelessly addicted.

How many of those writers have influenced me, though, I have no idea. I rarely go out of my way to be influenced, and most of the books people have suggested as being similar to Giant Thief - Leiber's Lankhmar stories, for instance - I hadn't actually read at the time. I know I liked the idea of writing a flight-and-chase novel, like Geoffrey Household's Rogue Male. Actually, I drew a lot more from films in the planning stages. Right at the start, I remember thinking a lot about eighties buddy movies, for example ... things like Beverley Hills Cop, where the fast-talking protagonist plays off against the by-the-book straight guy. A lot of that went into Giant Thief's DNA, and then Crown Thief's too, in different ways.

David:  Both and either, depending on the circumstances. Giant Thief was written with a beginning, middle and end in mind, and everything else I ... er ... "pantsed." That's more or less how I tend to write short fiction, too. Whereas with Crown Thief, not only had I had a long time to think about where I wanted to take it, I knew I'd only have a year to finish the actual writing (compared with the three or so that Giant Thief took me). so I went in with a detailed chapter plan and more or less stuck to it. With comic scripts, I plan in even more detail than that. Pantsing is fun, but sometimes you just can't afford the blind alleys and days of figuring yourself out of plot holes that tend to come with it.

David:  At the moment, the lack of time that comes with trying to manage a professional writing career around a full time day job. Book deals are terrific, but if you're the kind of person that needs to occassionally take time out for luxuries like food and sleep, they should come with a health warning.

David:  If Easie Damasco had stopped at stealing a giant, he might have got away with it. But he didn't - and now he has an entire army on his tail.

TQ:  What inspired you to write Giant Thief?

David:  I don't know that anything inspired me to write Giant Thief exactly. It was more that having concentrated on short stories for a couple of years, I reached a point where I felt I was ready to tackle a novel-length project, and when the core idea of Giant Thief came along one night I realised it might just work at that length.

After that, though, what really shaped its direction was a desire to write a fantasy novel that wasn't entirely like anything else I'd come across. I wasn't out to reinvent the wheel, but I thought long and hard about what I did and didn't like in Fantasy and what I liked in other genres - like Crime and Humour - that could be transplanted. On top of that, I'd read a piece by Ursula LeGuin about racial and sexual diversity in her work, and I realised I didn't want to write a fantasy novel that was basically a load of white guys running around a thinly-veiled version of medieval England. Those were the kinds of ideas and questions that inspired Giant Thief into its final shape.

TQ:  What sort of research did you do for Giant Thief?

David:  I hunted up a lot of photoreference material for myself from a number of different countries, to try and get a better grasp of things like geography, architecture, clothing and weapons ... mostly those first two, because I'm not very well travelled and unfortunately my research budget didn't stretch to a world cruise.

David:  My protagonist (definitely not hero!) big-mouthed, disaster-prone thief Easie Damasco was, all puns aside, the easiest. Once I had his voice down, he more or less wrote himself. The villain of the piece, Moaradrid, was trickier. My favourite bad guys are the ones who believe whole-heartedly that they're not bad guys at all, who are so sure they're right that even the reader starts to wonder. I very much wanted Moaradrid to be like that. He's borderline crazy, he has no qualms about doing whatever it takes to get what he wants ... but he also believes beyond doubt that its both justified and necessary. What I eventually realised is that that kind of certainty means he doesn't often feel the need to justify himself. I stripped out more and more of his dialogue with each redraft. Whether it's setting villages on fire, torture or beheading, his actions are more than capable of doing the talking.

TQ:  Without giving anything away, what is/are your favorite scene(s) in Giant Thief?

David:  My favourite scene is right near the end, so I don't think I can answer that one without giving anything away. Damasco is rarely anything other than obnoxious to his unfortunate companions, stoic, kindhearted giant Saltlick and mayor-turned-resistance-leader Marina Estrada. There's a point in chapter 22, though, halfway up a mountain, where we see - just briefly! - a different side to him. I'm very fond of that scene.

David:  Well, Crown Thief is next on the novel front. It's more or less finished now, and due out towards the end of the year, I believe. Meanwhile, I'll be starting book three, currently titled Prince Thief, and trying as best I can to keep the plates spinning on all my other projects. I've a couple of comic and film scripts out there that I'd really like to get moving in 2012. Then there's always short stories coming out, with a few already scheduled that I'm very excited about. It's going to be another busy one! 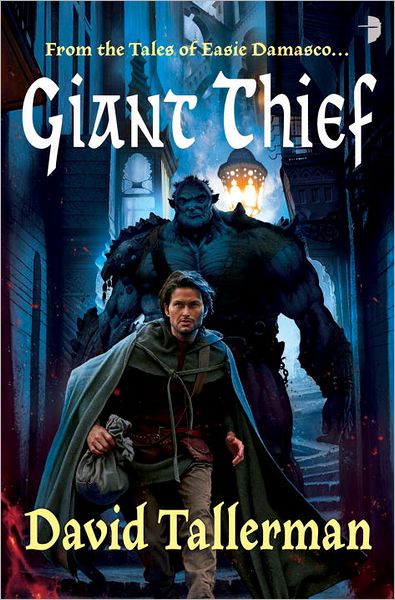 Even the wicked can’t rest when a vicious warlord and the force of enslaved giants he commands invade their homeland. Damasco might get away in one piece, but he’s going to need help. 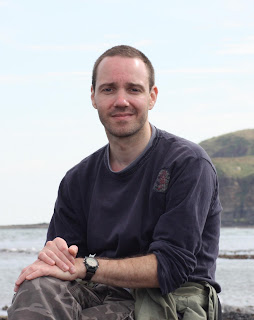 David Tallerman is the author of around a hundred short stories, as well as comic scripts and poems, countless reviews and articles and at least two novels. Many of these are already available in print, online and in podcast. Others are due to appear over the next few months - including the first of those novels, Giant Thief, to be published through Angry Robot in early 2012 with two sequels following close on its heels.

Not liking to be pinned down, David's work ranges from gruesome horror to comic fantasy, from political science-fiction to tales about mechanically assisted grizzly bears battling Nazi dolphins on the moon.

He's been writing off and on since he was about six, drawing comparisons to Enid Blyton in those early days, but thankfully less so recently. And he's been writing pretty much flat out since around 2005, having realised he enjoys it a lot more than any of the other jobs he's tried his hand at.

Most of his remaining time is eaten up by his regular employment as an itinerant IT Technician, and whatever's left he spends reading books, watching films, hiking, drinking wine and failing miserably to grow bonsai trees.

The photograph was taken near Robin Hood's Bay, which is somewhere behind the camera- person. There are some seals basking off to the left. If you've never seen a seal up close then you should really try to, they're awesomely weird looking creatures.

What:  One commenter will win a Mass Market Paperback copy of Giant Thief (Tales of Easie Damasco 1) from The Qwillery.


Who is (are) your favorite bad guy (or guys)?
Please remember - if you don't answer the question your entry will not be counted.

Who and When:  The contest is open to all humans on the planet earth with a mailing address. Contest ends at 11:59pm US Eastern Time on Tuesday, February 7, 2012. Void where prohibited by law. No purchase necessary. You must be 18 years old or older to enter.


*Giveaway rules are subject to change.*
Posted by Qwill at 8:57 AM