The 2011 Debut Author Challenge was a lot of fun! I read so many wonderful books by so many fantastic new authors. The Qwillery will be keeping an eye out for new books from the class of 2011 in 2012 and beyond. So what's next for the 2011 Debut Authors? 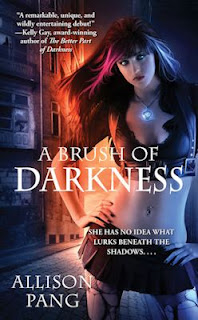 The man of her dreams might be the cause of her nightmares.

Six months ago, Abby Sinclair was struggling to pick up the pieces of her shattered life. Now, she has an enchanted iPod, a miniature unicorn living in her underwear drawer, and a magical marketplace to manage. But despite her growing knowledge of the OtherWorld, Abby isn’t at all prepared for Brystion, the dark, mysterious, and sexy-as- sin incubus searching for his sister, convinced Abby has the key to the succubus’s whereabouts. Abby has enough problems without having this seductive shape-shifter literally invade her dreams to get information. But when her Faery boss and some of her friends vanish, as well, Abby and Brystion must form an uneasy alliance. As she is sucked deeper and deeper into this perilous world of faeries, angels, and daemons, Abby realizes her life is in as much danger as her heart—and there’s no one she can trust to save her. 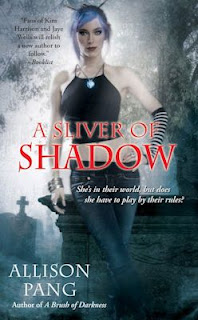 Just when her new life as a TouchStone – a mortal bound to help OtherFolk cross between Faery and human worlds – seems to be settling down, Abby Sinclair is left in charge when the Protectorate, Moira, leaves for the Faery Court. And when the Protectorate’s away…let’s just say things spiral out of control when a spell on Abby backfires and the Faery Queen declares the Doors between their worlds officially closed.

The results are disastrous for both sides: OtherFolk trapped in the mortal world are beginning to fade, while Faerie is on the brink of war with the daemons of Hell. Along with her brooding eleven prince Talivar and sexy incubus Brystion, Abby ventures to the CrossRoads in an attempt to override the Queen’s magic. But nothing in this beautiful, dangerous realm will compare to the discoveries she’s making about her past, her destiny, and what she will sacrifice for those she loves. 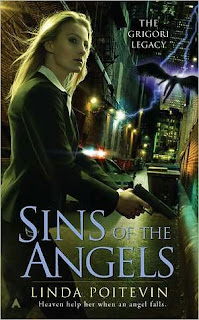 When homicide detective Alexandra Jarvis is assigned a new partner in Aramael, a Guardian Angel who doubles as a hit man, they have only one thing in common: a fallen angel hell-bent on triggering the apocalypse. Now they have no choice but to work together-relentlessly, fearlessly, intimately. Because only they can stop the rogue angel from ushering in the end of days. 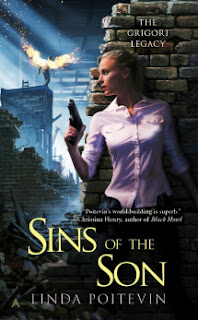 When homicide detective Alexandra Jarvis sees a photo of Seth Benjamin on a police bulletin, she knows that Heaven's plan to halt Armageddon has gone terribly wrong. As the only mortal who knows of Seth's true nature, only she can save him. Aramael was a hunter of Fallen Angels until a traitor forced him into earthly exile. Now, with no powers and only a faint memory of Alex, his mortal soulmate, he will stop at nothing to redeem himself-even if it means destroying Seth in the name of the Creator... 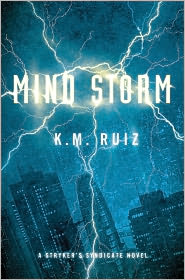 Two hundred and fifty years after the world was nearly wiped out by nuclear war, what’s left of society fights over the scraps of the Earth as the rich and powerful plan to ascend in secret to another planet. But the deadly new breed of humanity that the rulers have enslaved to protect their interests are about to change everything.

K.M. Ruiz’s Mind Storm is the rip-roaring tale of Threnody Corwin, a “psion” with the ability to channel electricity like lightning through anything she touches. As a solider-slave for the human government, Threnody is recruited by an unknown enemy: the scion of Earth’s most powerful (and supposedly human) family, the Serca Syndicate. But Lucas Serca is far from human and he intends to make Threnody and her fellow psions meet their destiny, no matter how many people he has to kill to do it.

Mind Storm is the first of two books chronicling the fight for survival by the psions and other “gene-trash” humans, before they’re killed by the racist world government, or left to die on a crumbling Earth. 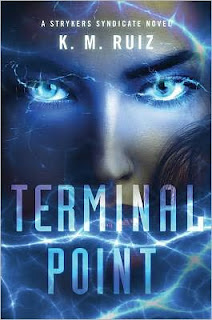 Fans of Charles Stross and Hannu Rajaniemi will lose themselves in this adventure as Threnody Crowin and her team of rogue Strykers contend with the aftermath of the events in Mind Storm and the unlocking of a new kind of psion power. T hey’re on the run with Lucas Serca, who is closer than ever to destroying the World Court and his father’s grip on the planet. Targeting the hidden cache of the planet’s food supply meant to transform Mars into a paradise for the chosen few, Lucas triggers an escalating fight with the ruling government as worldwide choas ensues. It’s up to Threnody to save society before it destroys itself, but the cost is high and in the end, there is no such thing as compromise.

There is only survival. 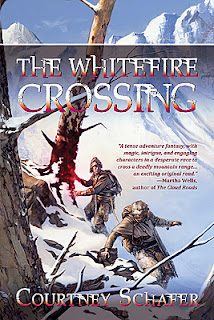 Dev is a smuggler with the perfect cover. He's in high demand as a guide for the caravans that carry legitimate goods from the city of Ninavel into the country of Alathia. The route through the Whitefire Mountains is treacherous, and Dev is one of the few climbers who knows how to cross them safely. With his skill and connections, it's easy enough to slip contraband charms from Ninavel--where any magic is fair game, no matter how dark--into Alathia, where most magic is outlawed.

But smuggling a few charms is one thing; smuggling a person through the warded Alathian border is near suicidal. Having made a promise to a dying friend, Dev is forced to take on a singularly dangerous cargo: Kiran. A young apprentice on the run from one of the most powerful mages in Ninavel, Kiran is desperate enough to pay a fortune to sneak into a country where discovery means certain execution--and he'll do whatever it takes to prevent Dev from finding out the terrible truth behind his getaway.

Yet the young mage is not the only one harboring a deadly secret. Caught up in a web of subterfuge and dark magic, Dev and Kiran must find a way to trust each other--or face not only their own destruction, but that of the entire city of Ninavel.

More information when it's available. 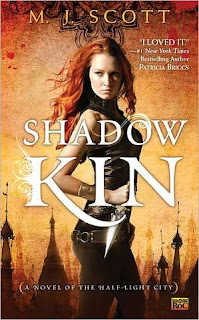 On one side, the Night World, rules by the Blood Lords and the Beast Kind. On the other, the elusive Fae and the humans, protected by their steadfast mages...

Born a wraith, Lily is a shadow who slips between worlds. Brought up by a Blood Lord and raised to be his assassin, she is little more than a slave. But when Lily meets her match in target Simon DuCaine, the unlikely bond that develops between them threatens to disrupt an already stretched peace in a city on the verge of being torn apart... 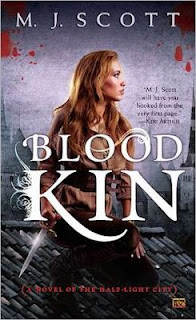 
More information when it's available. 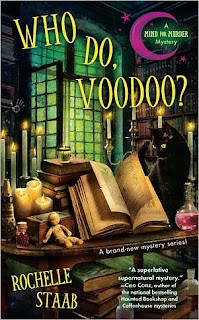 Clinical psychologist Liz Cooper doesn't believe in the supernatural. But when her best friend finds a tarot card tacked to her front door-and is then accused of murder-Liz will have to find a way to embrace the occult if she wants to outwit the real killer...

More on this title when it's available. 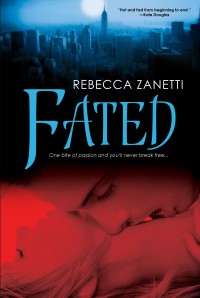 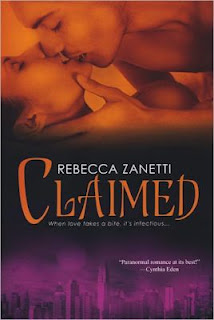 Emma Paulsen is a geneticist driven by science. But she’s also a psychic, so when a dark, good-hearted vampire frees her from the clutches of the evil Kurjans, she realizes he must be the man who’s been haunting her dreams. But with a virus threatening vampires’ mates, Emma may discover a whole new meaning of “lovesick”…

As King of the Realm, Dage Kayrs has learned to practice diplomacy. Still, it’s taken three hundred years to find his mate, so he’ll stop at nothing to protect her—even if it means turning his back on his own kind… 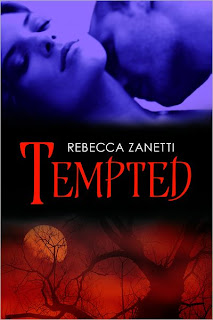 On the run from a mental institution and her vindictive half-brother, it’s safe to say that Sarah Pringle’s happy life as a schoolteacher is on hold. Too bad that as far as self-defense goes, “run and hide” is the best she’s got. And with the monsters that started her escape hot on her heels, that’s not going to cut it for long…

That is, unless Sarah has a bigger, badder, hotter monster on her side. Max Petrovsky is right at the top of the list of alpha male ass-kickers. And he knows exactly what Sarah’s up against. Good thing, because the minute he sees her something primal kicks in, turning everyday attraction into red-hot desire. As long as they’re cooperating, why not mix some pleasure with business? Of course, Max should probably tell Sarah he’s a vampire himself… 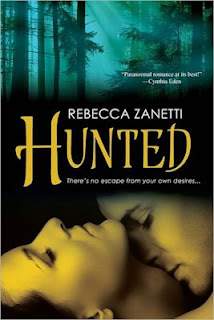 Moira Dunne is a witch—the quantum physics kind. Time and space are her playthings. Which might explain why her one-night stand from a hundred years ago has turned up to “claim” her—and request her family’s assistance with the war he’s brewing. But the more she learns about Connlan Kayrs, the more she comes to think this is normal behavior for him…

When Conn and Moira tumbled on the moonlit grass, Conn hadn’t meant to mark her as his mate for all time. She was only twenty! But it wasn’t easy to wait for her. It was even harder to forget her. So when he finally returns for his wicked-hot witch, he’s ready to let the sparks flying. Even if he burns up in flames…
Posted by Qwill at 5:19 AM