Please welcome John Love to The Qwillery as part of the 2012 Debut Author Challenge Interviews. Faith, John's debut, was published this month by Night Shade Books.

John  Rather grandly, I used to tell people that I preferred writing key passages with pen on paper first: the texture of the paper, the feel of the nib, and so on. Like a real auteur. Pretty soon into writing FAITH, all that got thrown out. Word lets me put key phrases at odd positions, then fill in the gaps, until the whole moves into focus. More impressionist than linear.

And I like some malt whisky, and a cat, within easy reach.

John  Hitchhiker’s Guide is one of my SF favourites, in all its early forms: the original BBC Radio 4 programme, the equally original BBC TV adaptation, and Douglas Adams’ unequalled “Trilogy of Five Novels.” But not the Hollywood movie. I didn’t like that at all.

Some other SF favourites are:
Alfred Bester: his novels and stories from the fifties.
Ursula LeGuin: almost anything of hers.
Jack Vance: the Demon Princes novels especially (most of his others too, but sometimes he goes on autopilot).
Iain M Banks: almost anything of his.
China Mieville: Perdido Street Station especially, but most of his other stuff.
Brian Aldiss: Hothouse and the Helliconia trilogy especially, but most of his other stuff.
William Gibson: especially Neuromancer, also The Difference Engine and the Bridge trilogy.
Fritz Leiber: most of his stuff.
Frederik Pohl: The Heechee trilogy, and (with Cyril Kornbluth) The Space Merchants.
R A Lafferty: especially Past Master.
Arkady and Boris Strugatsky: almost anything of theirs.
Stanislav Lem: known mainly for Solaris, but his output covered a huge range. For example, Imaginary Magnitude and A Perfect Vacuum (reviews of, and forewords to, nonexistent future books); the Pirx the Pilot and Ijon Tichy stories (surreal but perfectly logical political satires); Cyberiad and Futurological Congress (more satires, almost Swiftian); and The Invincible (page-turning hard SF).

Non-SF favourites include:
Giant nineteenth-century novels, especially from England, Russia and France. Great literary works, and great page-turners. Crime and Punishment, for example, works equally well as serious literature about Life, The Universe And Everything, and as a whodunnit. Except that the person who dunnit is known at the outset and has a cat-and-mouse game with the equally clever examining magistrate, wanting both escape and capture.
Jane Austen: How did she do it? No sex or violence, mostly just people having tea, but totally unputdownable.
Metaphysical poets: neutron-star language: ultimate concentration of meaning.
World War 1 poets, especially Wilfred Owen.
James Joyce, especially Portrait of the Artist and Ulysses.
Doctor Johnson, or more precisely Boswell’s Life of Samuel Johnson. Johnson was a great bear of a man, a pompous High Tory and High Church figure with opinions on everything – always original and sometimes unexpected, like his opposition to slavery. And he liked cats.
Herman Melville: Moby Dick of course, but also Billy Budd and Bartleby The Scrivener.
Richmal Crompton’s William books: children’s books mostly set in the nineteen-thirties and forties. Great children’s books, because Richmal Crompton used unashamedly literary words whose meaning you could figure out by their context. A good way to learn and remember words. Her style was dry and ironic, with absolutely no talking down.
Shakespeare, for all the obvious reasons, and also some of his contemporaries: Ben Jonson, Christopher Marlowe.
Chaucer, for his characterisation.
Cormac McCarthy: everything of his that I’ve read so far.
Elizabeth Bowen: her stories exist on the tipping-point between the everyday and the mysterious. Her famous story The Demon Lover is only six pages long, but hints at immensities.
Flann O’Brien: The Third Policeman (like Gormenghast, it defies genres).
Any books which manage to be both literary works and page-turners: too many for an exhaustive list, but titles like David Mitchell’s Cloud Atlas, William Boyd’s Brazzaville Beach, Thomas Wolfe’s Bonfire of the Vanities, Kazuo Ishiguro’s The Remains of the Day. The book I’m currently reading is that kind of book: The Shadow of the Wind, by Carlos Ruiz Zafon. I’m alternating it with The Windup Girl. I like alternating reads: each one seems to gain by the contrast.

John  Boring answer, but a bit of both. I only have experience of one-and-a-bit novels so far - FAITH, and the one I’m currently writing – but it’s been the same both times. The overall idea comes almost fully-formed and is not altered, but details of plotting, characters, back-stories and so on, can alter radically as I’m writing.

John  I’m always asking, Is this page enough to make a reader want to turn to the next page?

TQ:  What inspired you to write Faith?

John  Moby Dick, with the meeting of two titanic opponents. The movie Duel, because one opponent is unknown and unknowable. Kafka, for the sense of looming menace and the idea of struggling against a world where normal laws are inverted, where water flows uphill.

And I wanted to try writing a novel with a mix of “literary” and action content. But with no simple good and evil: where one bleeds into the other.

TQ:  What sort of research did you do for Faith?

John  I’ve always liked reading authors like Stephen Hawking to get an idea of how physics might develop new views of the universe - the clockwork of Newton, the apparent chaos of Einstein, the apparent illogic of quantum mechanics – and playing with ideas of what might come next.

Similarly, I’ve always read up on Boys’ Toys like spaceships and cars, and played with ideas of where they might go next.

So I had a headstart for a lot of the research into those areas, but while writing the book I also did some reading on psychological conditions. I didn’t do that before, because it was only as the characters developed and started striking sparks off each other that I realised there was a need for it. None of the characters are exactly nice or conventional.

John  An uncomfortably good question. Foord was the easiest, possibly Thahl the hardest.
Foord because he was central to the book and so I’d had him in mind for longer. Thahl because he is genuinely nonhuman but had to have some features which would enable him to relate to the humans around him. Also there was a need to balance his capacity for violence with his gentle sense of irony, and to balance his (partial) ability to sense human feelings with his inability to understand human sexual dynamics.

TQ:  Without giving anything away, what is/are your favorite scene(s) in Faith?

John  The opening scene, and the courtroom scene, for similar reasons: to balance an info dump with action sequences (opening scene) and to balance another info dump with characters and politics (courtroom scene). Also, the courtroom scene reminded me (in the assembling of arguments, and the cut and thrust of cross-examination) of things I used to do in the music industry – fighting legal cases in an abstruse area (copyright) which still had huge financial and precedental risks.

And the last scenes: the challenge to balance increasing strangeness with the need to keep the reader turning the page.

John  I love this genre. I’m currently writing a second novel, and again I turned automatically to SF as the best medium for saying what I want. It will be a kind of political thriller, but with strange edges. I set it in the future (about fifty years from now) so I can play with ideas about how politics, economics, technology, culture and religion could develop by then.

John  Thank you, Sally. And thank you for your interest in my book. 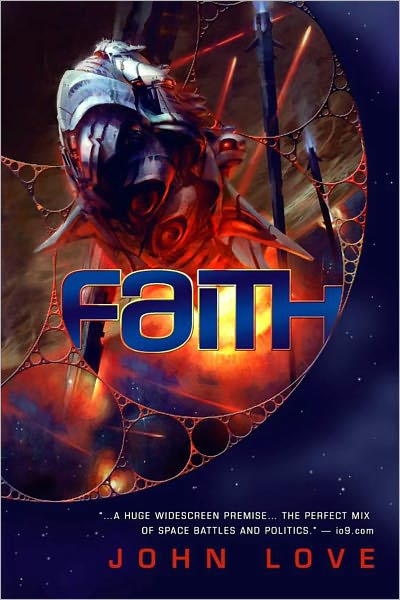 Moby Dick meets Duel in John Love's debut novel of Space Opera and Military Science Fiction! Faith is the name humanity has given to the unknown, seemingly invincible alien ship that has begun to harass the newly emergent Commonwealth. 300 years earlier, the same ship destroyed the Sakhran Empire, allowing the Commonwealth to expand its sphere of influence. But now Faith has returned! The ship is as devastating as before, and its attacks leave some Commonwealth solar systems in chaos. Eventually it reaches Sakhra, now an important Commonwealth possession, and it seems like history is about to repeat itself. But this time, something is waiting: an Outsider, one of the Commonwealth's ultimate warships. Slender silver ships, full of functionality and crewed by people of unusual abilities, often sociopaths or psychopaths, Outsiders were conceived in back alleys, built and launched in secret, and commissioned without ceremony. One system away from earth, the Outsider ship Charles Manson makes a stand. Commander Foord waits with his crew of miscreants and sociopath, hoping to accomplish what no other human has been able to do -- to destroy Faith!

John Love spent most of his working life in the music industry. He was Managing Director of PPL, the world’s largest record industry copyright organisation. He also ran Ocean, a large music venue in Hackney, East London.

He lives just outside London in north-west Kent with his wife Sandra and cats (currently two, but there have been as many as six). Sandra and John have two grown-up children.

Apart from his family, London and cats, his favourite things include books and book collecting, cars and driving, football and Tottenham Hotspur, old movies and music. Science fiction books were among the first he can remember reading, and he thinks they will probably be among the last.