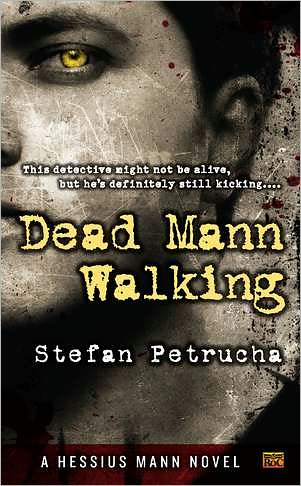 After Hessius Mann was convicted of his wife's murder, suppressed evidence came to light and the verdict was overturned-too bad he was already executed. But thanks to the miracles of modern science Hessius was brought back to life. Sort of.

Now that he's joined the ranks of Fort Hammer's pulse-challenged population, Hessius attempts to make a "living" as a private investigator. But when a missing persons case leads to a few zombies cut to pieces, Hessius starts thinking that someone's giving him the run-around-and it's not like he's in any condition to make a quick getaway...

My description and thoughts:

Dead Mann Walking is the first in the Hessius Mann series by Stefan Petrucha.

Hessius Mann is a zombie (chak), but not the shuffling zombie of the Romero movies. Hessius is a sentient high functioning chak. He's one of the lucky ones having been brought back to 'life' before he had deteriorated much. His reanimation was sanctioned by the government because of his wrongful conviction for his wife's murder. In addition to those reanimated due to a miscarriage of justice, many were reanimated because their loved ones missed them. Without proper care a chak can rot and all of them can become feral and have to be put down. Reanimation for loved ones rapidly became unpopular. Chakz became segregated from society and mostly reside in shanty towns and The Bones, an area of Fort Hammer.

Hessius has a liveblood (human) assistant, Misty, who helps run his office, patches him up when he's hurt (glue and stitching), and helps to keep him in the here and now so he does not become feral. Chakz have memory issues, even the higher functioning ones. Hessius mainly uses a recording device to help him remember things, but he has to remember he has the device.

Hessius is hired to find an heir who is also a chak. The job provides much needed funds. In addition to the case, Hessius is bothered by the news that a chak has been found chopped up in the desert. For some reason this murder sticks with him. What Hessius doesn't know is that accepting the missing heir case will put him up to his neck in something far more serious.

Stefan Petrucha has created a terrific world for Hessius Mann. He peppers the story with fascinating details, unique terminology and pop culture references that make the world both more substantial and more enjoyable. I was fully engaged with this world while reading Dead Mann Walking.  Hessius Mann is both likable and compelling. Despite his memory and lifeless issues, he's a first-rate PI. The secondary cast of characters is also well-crafted with their own interesting life/unlife stories. The bad guy was more than suitably creepy. Dead Mann Walking is a noirish mystery/thriller with a new twist on zombies, a great detective and a story that will keep you on the edge of your seat from beginning to end.