Review of 'Nocturne' from Angels of Darkness - 4 Qwills

I was asked by Mihir of Fantasy Book Critic if I'd like to participate in a multiblog review for the Angels of Darkness anthology, which features four novellas by four authors. Of course, I said "yes."

The reviews for the four novellas may be found at the listed blogs. Click on the blog names to go to the reviews. The Qwillery's review is below.

4)  Ascension by Meljean Brook - Bastard (Bastard Books and other crap)


My thoughts about Nocturne by Sharon Shinn:

Until I read Nocturne in Angels of Darkness I'd never read anything by Sharon Shinn. Now I will be hunting down her Samaria series, which is the world in which her novella, Nocturne, is set.

The main characters in Nocturne are Moriah and a blind angel. Moriah is a cook at a remote Gabriel School. These schools were set up to educate abandoned children. Moriah is clearly running away from something. She becomes involved in the care of the blind angel due to a series of events both fortuitous and somewhat calamitous.

Moriah is a woman who marches to her own drummer and is not deluded about herself. She knows she can be abrasive and difficult. The blind angel is depressed due to his blindness and what caused it. He's not a typical overbearing alpha male though he might be were he not blind. I really enjoyed the interactions between Moriah and the angel. They are both abrasive in their own ways, and the interplay between them was very well done and fun to read. Through this interplay we learn why Moriah and the angel are in their present circumstances. Their relationship grows slowly. Nocturne is a gentle love story.

Though Nocturne is set in a world that I am unfamiliar with, I think that Sharon Shinn dose a great job of providing the right amount of information so that I did not feel lost, but rather understood the world. The interactions with the secondary characters in the story are well done though the focus is clearly on Moriah and the angel. I like Sharon Shinn's writing style. It seems very straightforward with with no excesses. This may be a result of the novella format or may be her style. I intend to find out by reading more of her work.

Nocturne is an entertaining and engaging tale, which I give 4 Qwills. 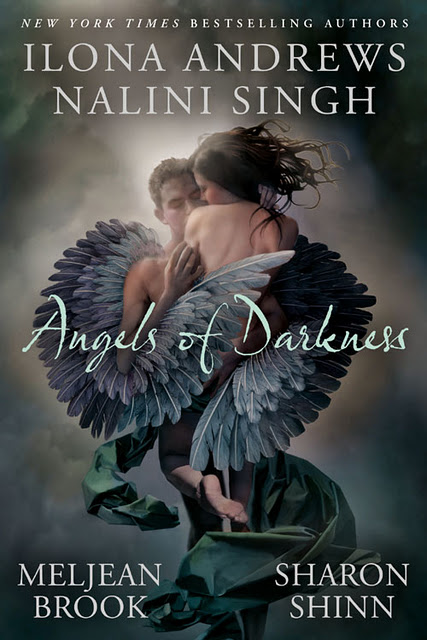 They soar through the night, unearthly creatures of legends and lore. Four masters of urban fantasy and paranormal romance explore the rapture of the heavens above, and the darkness below in four all-new stories of angels and guardians, and good and evil.