Janet:  Humor, I think, which creeps in unbidden into nearly everything I've written.

Janet:  Since I've sold on proposal by necessity I've become a plotter, but my synopses are very vague with huge holes so I actually write as a pantser and trust that everything will fall into place.

TQ:  You’ve written 2 Austenesque paranormal novels – Jane and the Damned (2010) and Jane Austen: Blood Persuasion (2011). What inspired you to write them?

Janet:  The editor who bought my first Regency chicklit, The Rules of Gentility, suggested I write something about Austen and vampires, since at the time P&P&Zombies was very big. I'm not sure that what I wrote, Jane and the Damned, was quite what she had in mind, but she wanted something funny, which she did get. I don't consider myself a paranormal writer but I had fun creating a world that could accommodate both Jane Austen and the supernatural.

TQ:  How does Jane Austen: Blood Persuasion fit into the Austen pantheon? Does it continue an Austen novel or present an alternate version? Or is it something else?

Janet:  Absolutely something else. It's based very loosely on episodes in Austen's life but in an alternate England where vampires are "out" and visible in society. In the first book, Jane and the Damned, Austen is created a vampire and is taken to Bath to take the cure, the Bath waters, but when the French invade, she stays a vampire to fight them. JABP is set 13 years later when the Damned, the vampires, are out of favor and settle in the village of Chawton, and their proximity to Jane makes her acquire vampire characteristics once more.

TQ:  What is your favorite Jane Austen novel? Why?

Janet:  Emma--it's funny and full of levels of irony and deception (in both Austen's and the characters' voices) and it always engages me when I reread it.

TQ:  If you could go back in time to have tea with Jane Austen what would you want to ask her?

Janet:  About the letters her sister Cassandra destroyed although I suspect they were full of nasty comments about her family and/or people she knew, nothing really juicy! Also what she thinks of the whole Austen sequel, prequel industry.

TQ:  Will there be additional Jane Austen paranormals?

Janet:  Probably not. It was a two book contract and I wrapped up both the story arc and Jane's life in the second book.

Janet:  My next book is a rewrite of my first novel Dedication, the only trade Regency with two bondage scenes, which Loose-Id will be bringing out next year. I've also got a short story in the fabulous anthology Jane Austen Made Me Do It ed, Laurel Ann Nattress, which also came out this month. I'm writing this from Ft Worth, TX where we had a book launch party for the anthology, JABP, and Carrie Bebris's latest--it was also the location for the JASNA Conference, which was wonderful.


About Jane Austen: Blood Persuasion, Jane and the Damned and Jane Austen Made Me Do It 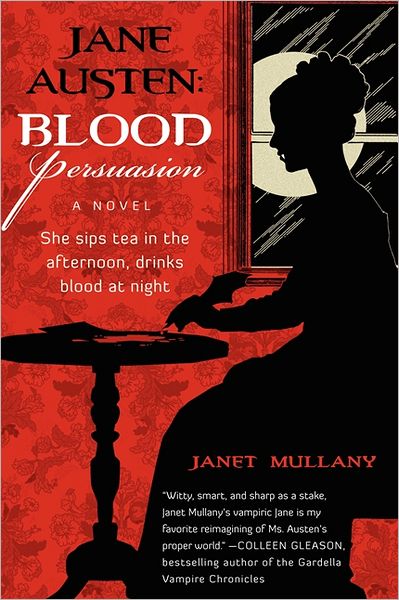 It is 1810, and the Damned are out of favor—banished from polite society. Jane Austen’s old undead friends have become new neighbors, raising hell in her tranquil village just in time to interrupt Jane’s work on what will be her masterpiece. Suddenly Jane’s niece is flirting dangerously with vampires, and a formerly respectable spinster friend has discovered the forbidden joys of intimate congress with the Damned (and is borrowing Jane’s precious silk stockings for her assignations). Writing is simply impossible now, with murderous creatures prowling the village’s once-peaceful lanes. And with the return of her vampire characteristics, a civil war looming between factions of the Damned, and a former lover who intends to spend eternity blaming her for his broken heart, Jane is facing a very busy year indeed. 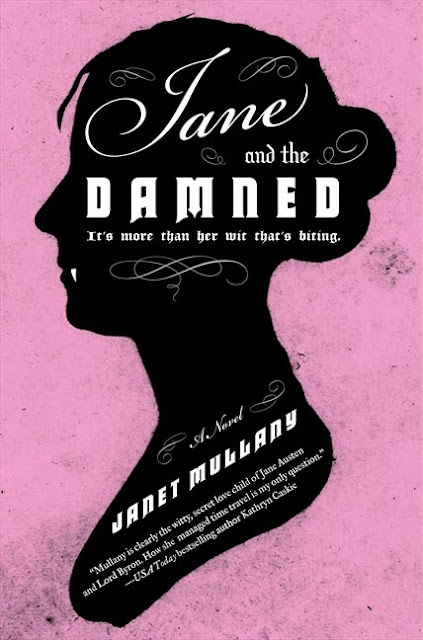 Aspiring writer Jane Austen knows that respectable young ladies like herself are supposed to shun the Damned—the beautiful, fashionable, exquisitely seductive vampires who are all the rage in Georgian England in 1797. So when an innocent (she believes) flirtation results in her being turned—by an absolute cad of a bloodsucker—she acquiesces to her family’s wishes and departs for Bath to take the waters, the only known cure.

But what she encounters there is completely unexpected: perilous jealousies and further betrayals, a new friendship and a possible love. Yet all that must be put aside when the warring French invade unsuspecting Bath—and the streets run red with good English blood. Suddenly only the staunchly British Damned can defend the nation they love . . . with Jane Austen leading the charge at the battle’s forefront.

Jane Austen Made Me Do It
Laurel Ann Natress (editor)
Random House
October 11, 2011 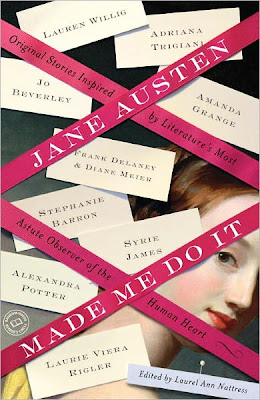 “My feelings will not be repressed. You must allow me to tell you how ardently I admire and love you.” If you just heaved a contented sigh at Mr. Darcy’s heartfelt words, then you, dear reader, are in good company. Here is a delightful collection of never-before-published stories inspired by Jane Austen—her novels, her life, her wit, her world.

In Lauren Willig’s “A Night at Northanger,” a young woman who doesn’t believe in ghosts meets a familiar specter at the infamous abbey; Jane Odiwe’s “Waiting” captures the exquisite uncertainty of Persuasion’s Wentworth and Anne as they await her family’s approval of their betrothal; Adriana Trigiani’s “Love and Best Wishes, Aunt Jane” imagines a modern-day Austen giving her niece advice upon her engagement; in Diana Birchall’s “Jane Austen’s Cat,” our beloved Jane tells her nieces “cat tales” based on her novels; Laurie Viera Rigler’s “Intolerable Stupidity” finds Mr. Darcy bringing charges against all the writers of Pride and Prejudice sequels, spin-offs, and retellings; in Janet Mullany’s “Jane Austen, Yeah, Yeah, Yeah!” a teacher at an all-girls school invokes the Beatles to help her students understand Sense and Sensibility; and in Jo Beverley’s “Jane and the Mistletoe Kiss,” a widow doesn’t believe she’ll have a second chance at love . . . until a Miss Austen suggests otherwise.

Regency or contemporary, romantic or fantastical, each of these marvelous stories reaffirms the incomparable influence of one of history’s most cherished authors. 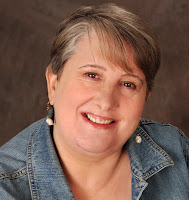 Janet Mullany was born in England but now lives near Washington, DC. She’s worked as an archaeologist, performing arts administrator, waitress, bookseller, and as an editor/proofreader for a small press. Her debut book was Dedication, the only Signet Regency to have two bondage scenes, followed by The Rules of Gentility (HarperCollins 2007), which was acquired by Little Black Dress (UK) for whom she wrote three more Regency chicklits, A Most Lamentable Comedy, Improper Relations, and Mr. Bishop and the Actress. Her career as a writer who does terrible things to Jane Austen began in 2010 with the publication of Jane and the Damned (HarperCollins), a book about Jane as a vampire, and a modern retelling of Emma, Little to Hex Her, in the anthology Bespelling Jane Austen headlined by Mary Balogh. Her most recent book is Jane Austen: Blood Persuasion, about the vampire invasion of Chawton (William Morrow, 2011).

What:  One commenter will win a copy of Jane Austen: Blood Persuasion from The Qwillery.


Favorite Jane Austen novel?
OR
Novel you would like to see given a paranormal treatment?
Please remember - if you don't answer one of the questions your entry will not be counted.

Who and When: The contest is open to all humans on the planet earth with a mailing address. Contest ends at 11:59pm US Eastern Time on Monday, October 24, 2011. Void where prohibited by law. You must be 18 years old or older to enter.


*Giveaway rules are subject to change.*
Posted by Qwill at 8:51 AM