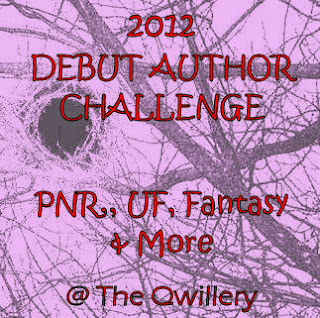 The Qwillery's Debut Author Challenge is entering its second year. This year many of the 2012 Debut Authors will be writing a guest post approximately 2 months ahead of his or her debut novel's publication. So you will be getting to know some of these Debut Authors starting next month. Near the debut's publication date, each of the 2012 Debut Authors will be interviewed. Debut Authors' books will be listed in a post on the first of each month. Please check each month's list to let me know if I've missed any debut authors. You can also let everyone participating know which book you will be reading in the comments to the post.

The object of the 2012 Debut Author Challenge is for participants to read at least 12 debut novels during 2012 - one from each month of the year though you may read them anytime between January 1, 2012 and December 31, 2012.

This year we will also attempt some group reads of debut novels and invite the author(s) back for some Q&A.

The following Debut Authors will be visiting The Qwillery during 2011/2012. Please note that they are listed in alphabetical order, not guest post, interview or release date order. This list will be continually updated. You can see the most up-to-date list at the 2012 DAC page.