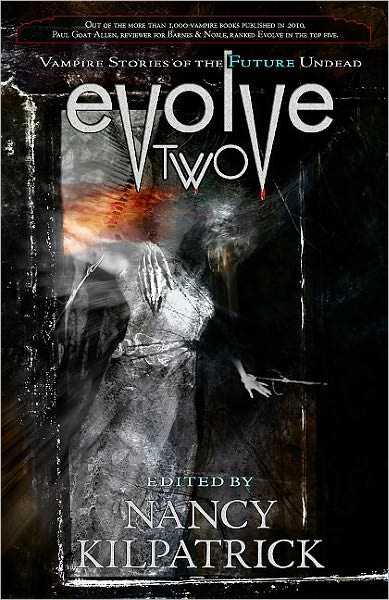 Vampires: friend or foe? Either way, time is on their side, and they are more powerful than ever before!

Meet the eternal predator that humanity never ceases to find both fascinating and terrifying. Evolve Two: Vampire Stories of the Future Undead moves this creature beyond 2012, through this century and into the next. We humans will evolve, but so will they! Whatever apocalyptic events that lie ahead for our species, for the planet, Vampires will be there too, helping or hindering, effecting or infecting us. Time is on their side, but it may not be on ours. They are vampires, and more powerful than ever before!

Hot on the heels of the best seller, EVOLVE: Vampire Stories of the New Undead, Nancy Kilpatrick does it again with twenty-two original stories that explore the evolution of vampires.

About the Editor:
Award-winning author Nancy Kilpatrick has published eighteen novels, over one hundred and ninety short stories, five collections of stories, and has edited nine other anthologies. Much of her body of work involves vampires. Nancy writes dark fantasy, horror, mysteries and erotic horror, under her own name, her nom de plume Amarantha Knight, and her newest pen name Desirée Knight (Amarantha’s younger sister!) Besides writing novels and short stories, and editing anthologies, she has scripted four issues of VampErotic comics. As well, she’s penned radio scripts, a stage-play, and the non-fiction book The Goth Bible: A Compendium for the Darkly Inclined (St. Martin’s Press — October 2004).

Nancy won the Arthur Ellis Award for best mystery story, is a three times Bram Stoker finalist and a five times finalist for the Aurora Award.

About the Cover Artist:
Ex-gravedigger John Kaiine, self trained professional artist/photographer, is also the author of the critically acclaimed metaphysical thriller Fossil Circus and various short stories, including the short film feature Dolly Sodom. He lives in a house by the sea with his wife, Tanith Lee, and two black and white cats.

About the Website: www.vampires-evolve.com is a website dedicated to the Evolve anthologies. Find out information about Evolve authors, and forthcoming event information.

The Giveaway
THE RULES
What:  One commenter will win a copy of Evolve Two: Vampire Stories of the Future Undead from The Qwillery.
How:  Leave a comment answering the following question:
What is your favorite vampire story or series?
Please remember - if you don't answer the question your entry will not be counted.
You may receive additional entries by:
1) Being a Follower of The Qwillery.
2) Mentioning the giveaway on Facebook and/or Twitter. Even if you mention the giveaway on both, you will get only one additional entry. You get only one additional entry even if you mention the giveaway on Facebook and/or Twitter multiple times.
3) Mentioning the giveaway on your on blog or website. It must be your own blog or website; not a website that belongs to someone else or a site where giveaways, contests, etc. are posted.
There are a total of 4 entries you may receive: Comment (1 entry), Follower (+1 entry), Facebook and/or Twitter (+ 1 entry), and personal blog/website mention (+1 entry). This is subject to change again in the future for future giveaways.
Please leave links for Facebook, Twitter, or blog/website mentions. In addition please leave a way to contact you.
Who and When: The contest is open to all humans on the planet earth with a mailing address. Contest ends at 11:59pm US Eastern Time on Friday, August 26, 2011. Void where prohibited by law.
*Giveaway rules are subject to change.*
Posted by Qwill at 8:38 AM