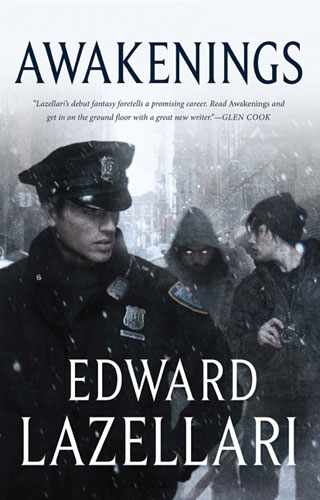 Cal MacDonnell is a happily married New York City cop with a loving family. Seth Raincrest is a washed-up photographer who has alienated even his closest friends. The two have nothing in common—except that they both suffer from retrograde amnesia. It’s as if they just appeared out of thin air thirteen years ago, and nothing has been able to restore their memories. Now their forgotten past has caught up to them with a vengeance.

Cal's and Seth’s lives are turned upside down as they are stalked by otherworldly beings who know about the men's past lives. But these creatures aren't here to help; they're intent on killing anyone who gets in their way. In the balance hangs the life of a child who might someday restore a broken empire to peace and prosperity. With no clue why they're being hunted, Cal and Seth must accept the aid of a strange and beautiful woman who has promised to unlock their secrets. The two must stay alive long enough to protect their loved ones, recover their true selves—and save two worlds from tyranny and destruction.

Awakenings launches a captivating fantasy saga by an amazing and talented new storyteller.

I really enjoyed Awakenings. There is a great deal of action while the characters learn about their pasts, their mission, what was lost, and what still may be lost. Yes, I'm being vague as I don't want to spoil the story. There are two worlds involved so in many ways the Guardians of Aandor series is about what will happen if the bad from one world overwhelms the other. Awakenings is the first foray into this battle. We are offered glimpses of the other world. from both the point of view of the bad guys and from Cal, primarily, as he remembers who and what he is with the help of the "strange and beautiful" woman Lelani.  The story is told from several viewpoints, Cal, Seth, the lost child, and others. This worked very well. The different viewpoints weave together to make a compelling read.

I found the character development to be very well done. I have a true sense of who Seth and Cal are and what they may become. The secondary characters, if they can even be relegated to that status, are also well drawn. Cat, Cal's wife, is a particular favorite as she struggles with the fact that her husband is not exactly who she thought he was.

There are turns and twists, battles, magic, monsters, and a sense of the epic in Awakenings. Awakenings is a beginning for the characters. Questions are left open for the following books to resolve: Will the life of the child be saved? Will Cal and Seth fully embrace their pasts? Will the worlds be saved from destruction?

Awakenings is a thrilling debut with great pacing, characters you care about, and a riveting story. I found it hard to put down. I've become a fan of this series and can't wait to read the next book.