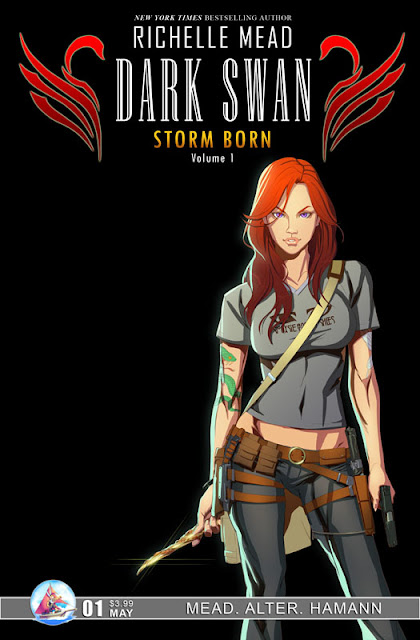 Eugenie Markham never asked for any of this. Until now, she's been content with her job as a freelance shaman battling and banishing Otherworldy creatures. When a prophecy suddenly makes her the Otherworld's most popular bachelorette, Eugenie finds herself fighting off unwanted supernatural suitors, as well as the evils that begin emerging from her past...

I always have a bit of concern when I read a comic based on a book. Will the comic be true to the story? Will something important be missed or lost? Will the main character meet my expectations in terms of how she or he looks and acts?

I carefully compared Richelle Mead's Dark Swan: Storm Born, Issue 1 from Sea Lion Books to the novel Storm Born. In this instance I can say that I was not disappointed in the least bit.
Issue 1 of the comic covers the novel from the beginning to approximately page 48. Close attention to the novel has been paid down to the smallest details. For example, the sneaker in the opening pages of the comic matches the colors described in the book.
Grant Alter has really done a superb job with the script. The flow of the story and dialog is extremely close to that in the book. Nothing seems to be left out. Just like the book, the pacing in the comic is excellent.
I really like the artwork. Dave Hamann has done a great job of rendering the characters. The colors by Nelson Cosentino de Oliveira are beautiful. Eugenie looks like how I would expect her to look right down to her violet eyes and cinnamon colored hair.
Very clearly the novel has been captured in the comic to the point that you can read Issue 1 of the comic and not need to read the beginning of the novel. The comic is that good! I am looking forward to all 8 issues.
If you are a fan of Urban Fantasy or Richelle Mead or both this is the comic for you.
I highly recommend Richelle Mead's Dark Swan: Storm Born, Issue 1 and give the comic 5 Qwills.

In addition to the regular cover there is a Limited Edition Incentive Cover for Issue 1 that is signed by Richelle Mead and Dave Hamann. 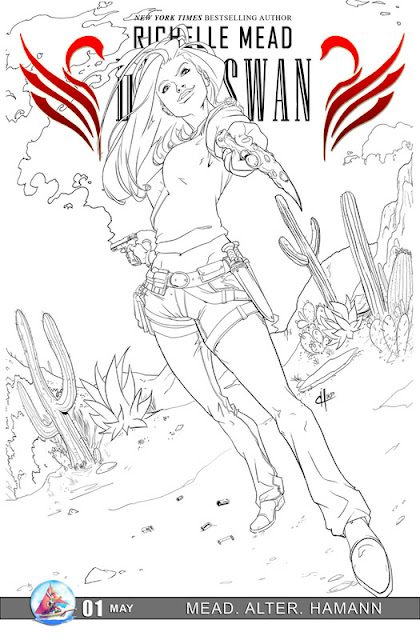 You can see a preview of Issue 1 at Sea Lion Books' website.
Posted by Qwill at 4:32 PM