A funny thing happened on the way to this blog. Sally (Qwill) and I discovered a theatre connection. She had attended shows at the Southbury Playhouse. I had performed there.

Spellcast – my new contemporary fantasy – is filled with such unexpected connections. The surprising friendships that spring up during a summer stock season. The sense of community that shapes a theatre company that lives and works together. And most of all, the magic that connects a group of strangers and transforms them into a family.

In writing Spellcast, I wanted to capture the magic of theatre for readers: the joy of stepping out of the everyday world into the imaginary one onstage; the sudden tension as the house lights dim; the excitement of knowing that – in live theatre – anything can happen.

But I also wanted to go one step further and throw some otherworldly magic into the mix. What better place than a theatre to combine the two? And to explore what one character in Spellcast calls “the impossible possibilities” of life?

I never intended to cannibalize my life for the book. I was just going to sprinkle in a few memories to add “flavor.” Like the rundown boarding house that our cast nicknamed “Anatevka” after the village in Fiddler on the Roof. The mottled black-and-gray backdrop that we likened to the Shroud of Turin. And the bats that occasionally swooped through the old barn, drawing gasps from the audience and completely stealing focus from those of us onstage.

Before I knew it, I was pouring my life into the protagonist’s. Maggie grows up in Wilmington, Delaware; so did I. She loses her job at a telephone helpline; I worked at one while I was writing for the musical theatre. She falls in love during her season in summer stock; I met my husband there.

Sometimes, I had to remind myself that I was writing a novel, not an autobiography. That helped me keep Maggie Graham and Barbara Ashford separate. But we share a lot of qualities, including a deep love for the magic of theatre.

In Spellcast, Maggie encounters plenty of magic – both theatrical and otherworldly – and discovers more than her share of “impossible possibilities.” I hope readers will enjoy discovering them with her and exploring the magical world of the Crossroads Theatre. And I hope you’ll drop by http://www.barbaraashford.com/ where you can see some photos from my days as an actress, read an excerpt from Spellcast, and get a sneak peek at the sequel coming out next spring.

Thanks for visiting! And thanks, Sally, for inviting me to share my experiences in writing Spellcast. 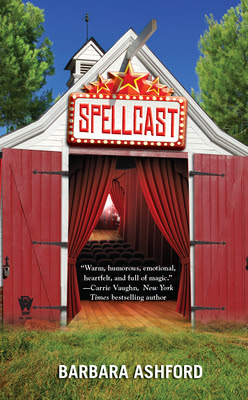 Maggie Graham is having a very bad day. First, she loses her job. Then her bathroom ceiling collapses. Hoping a weekend getaway will restore her spirits, she drives to Vermont – and winds up auditioning for the Crossroads Theatre.

Director Rowan Mackenzie is even odder than the misfits who comprise the company. What kind of director casts people in the roles they need? And never leaves the grounds of the theatre? And possesses the power to transform a train wreck of a show into something...magical?

There’s a secret at the Crossroads, and Maggie is determined to uncover it. She never imagines she’ll discover secrets about her past that will change her life – and Rowan’s – forever.

WHAT REVIEWERS ARE SAYING

“There's a vast but little known overlap between fans of fantasy and fans of musical theater, and Barbara Ashford hits the sweet spot on both with SPELLCAST. It's warm, humorous, emotional, heartfelt, and full of magic. Curse you, Barbara, for making me cry! And for getting ‘Some Enchanted Evening’ stuck in my head all week.” Carrie Vaughn, bestselling author of the Kitty Norville series

“A recently unemployed woman finds herself signing up for summer stock in this charming fantasy novel. Maggie Graham is enchanted and bemused by the Crossroads Theatre in Vermont, from the quaint locale to…its mysteriously charming director, who has a magical knack for pulling great performances out of an inexperienced cast...It takes Maggie a while to really grasp just how magical it is. Readers will figure it out much sooner, but there’s enough mystery (not to mention romance) to keep readers interested in figuring out just exactly what is going on. Fans of musicals will have the most fun, since this theater specializes in musical comedy...A slightly bittersweet but appropriate conclusion left me wanting more, in fine theatrical tradition.” Locus 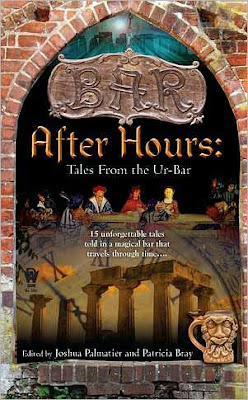 Science fiction and fantasy readers have long shown an affinity for a good "bar story". Now some of today's most inventive scriveners have decided to tell their own tall tales-from an alewife's attempt to transfer the gods' curse to Gilgamesh, to Odin's decision to introduce Vikings to the Ur-Bar, from the Holy Roman Emperor's barroom bargain, to a demon hunter who may just have met his match in the ultimate magic bar, to a bouncer who discovers you should never let anyone in after hours in a world terrorized by zombies. 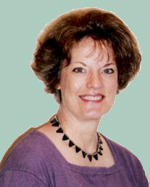 Barbara Ashford abandoned a career in educational administration to pursue a life in the theatre, working as an actress in summer stock and dinner theatre and later, as a lyricist and librettist. She’s written everything from cantatas to choral pieces, one-hour musicals for children to full-length ones for adults. Her musicals have been performed throughout the world, including such venues as the New York Musical Theatre Festival and the Edinburgh International Festival.

Barbara lives in New Rochelle, New York with her husband whom she met while performing in summer stock. Spellcast is her first contemporary fantasy and is inspired by her years as an actress.

What:  One commenter will win a copy of Spellcast provided by Barbara.


What is your favorite musical theatre show?
Please remember - if you don't answer the question your entry will not be counted.

Who and When: The contest is open to all humans on the planet earth with a mailing address. Contest ends at 11:59pm US Eastern Time on Saturday, May 14, 2011****. Void where prohibited by law.