Interview with Kevin Hearne and Giveaway - May 3, 2011

Please welcome Kevin Hearne to The Qwillery as part of the 2011 Debut Author Challenge interviews. Today marks the release of Kevin's debut, Hounded.

Kevin:  Well, I’m not much of a fighter; I’m much closer to a pacifist, so fight scenes are tough for me to write. Fight scenes require special preparation. I have to drink a bit (sometimes a lot, using a proper flagon) to loosen my inhibitions and listen to death metal to get myself in the mood, or else I want to steer things toward a diplomatic solution. Of course that means I always have to go back and clean up the language when I’m sober, but that’s better than staring at a blank screen for hours and crying, “Why can’t they all just get along?”

Kevin:  Neil Gaiman and Neal Stephenson are a couple of my faves, as well as William Gibson. They’re all influential in terms of world building; I don’t write anything like them and I certainly wouldn’t want to compare myself to them. That would be akin to hubris!

Kevin:  As Forrest Gump famously said, “I think it’s both happening at the same time.” I have skeletal outlines that serve as a scaffolding for my books, but sometimes I leave out parts, rearrange events, and then add something that I never planned on.

TQ:  If Atticus O'Sullivan was a beer-type beverage which one would he be and why?

Kevin:  Smithwick’s Irish ale! He’s got flavor and character without being inaccessible to the average drinker. And he goes great with everything.

TQ:  What inspired you to write The Iron Druid Chronicles?

Kevin:  I’ve always wanted to talk to dogs, so that was part of it; I wanted to write about a character who could talk to animals, and Druids are one of the magical classes capable of doing it, if you believe your Irish myth. But I also wanted to explore Irish mythology (and other mythologies) a bit, taking the Fae back to their original Irish roots with the Tuatha Dé Danann. That part I blame on Disney. My daughter loved the Disney fairies and I was like, “No, sweet child o’ mine, those aren’t fairies. Someone in California made that stuff up to make money. It’s better to believe in stuff made up by Irishmen centuries ago to scare the bejesus out of you.” So that experience narrowed my focus on the Tuatha Dé Danann and the idea that they were the progenitors of the Fae.

TQ:  What sort of research did you do for The Iron Druid Chronicles?

Kevin:  I looked at lots of old Irish stuff like The Annals of the Four Masters, the Ulster and Fenian Cycles, and then some historical sources like Julius Caesar’s account of the Druids. I also looked into modern Druidry and discovered it had very little to do with the real Druids who got wiped out by the Romans and St. Patrick. On top of this, since I was dealing with a 2,100-year old character, I had to come up with a timeline of where he was throughout our recorded history. Many of his adventures will never get to be told, but I had to spend the time doing it anyway so I don’t wind up putting him in two different places at the same time later in the series.

Kevin:  Pretty much every scene with the widow MacDonagh has a special place in me heart. That character is loosely based on me own dearly departed grandma, so of course I’m quite partial to her.

Kevin:  Oberon’s easiest. He gets the best lines, all the snarky stuff you always want to say but never think of in time. Malina Sokolowski was the hardest to write in all three books because I had to somehow create a smidgen of sympathy for her character when my narrator doesn’t trust her.

Kevin:  Currently I’m working on book four and hoping the demand will be there; it’ll be called TRICKED. I’m also working on an epic fantasy and a secret project I hope I’ll be able to announce sometime over the summer.

Kevin:  Are you kidding, Qwill? I’m thrilled to be here! You like bacon and comic books and taking photographs of beautiful things, so I feel privileged to hang out with you, virtually speaking! Thanks so much! 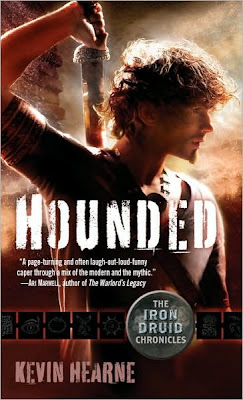 Atticus O’Sullivan, last of the Druids, lives peacefully in Arizona, running an occult bookshop and shape-shifting in his spare time to hunt with his Irish wolfhound. His neighbors and customers think that this handsome, tattooed Irish dude is about twenty-one years old—when in actuality, he’s twenty-one centuries old. Not to mention: He draws his power from the earth, possesses a sharp wit, and wields an even sharper magical sword known as Fragarach, the Answerer.

Unfortunately, a very angry Celtic god wants that sword, and he’s hounded Atticus for centuries. Now the determined deity has tracked him down, and Atticus will need all his power—plus the help of a seductive goddess of death, his vampire and werewolf team of attorneys, a sexy bartender possessed by a Hindu witch, and some good old-fashioned luck of the Irish—to kick some Celtic arse and deliver himself from evil. 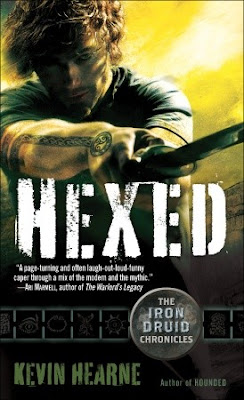 Atticus O’Sullivan, last of the Druids, doesn’t care much for witches. Still, he’s about to make nice with the local coven by signing a mutually beneficial nonaggression treaty—when suddenly the witch population in modern-day Tempe, Arizona, quadruples overnight. And the new girls are not just bad, they’re badasses with a dark history on the German side of World War II.

With a fallen angel feasting on local high school students, a horde of Bacchants blowing in from Vegas with their special brand of deadly decadence, and a dangerously sexy Celtic goddess of fire vying for his attention, Atticus is having trouble scheduling the witch hunt. But aided by his magical sword, his neighbor’s rocket-propelled grenade launcher, and his vampire attorney, Atticus is ready to sweep the town and show the witchy women they picked the wrong Druid to hex. 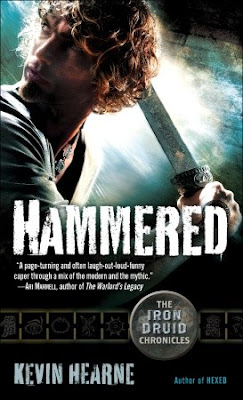 Thor, the Norse god of thunder, is worse than a blowhard and a bully—he’s ruined countless lives and killed scores of innocents. After centuries, Viking vampire Leif Helgarson is ready to get his vengeance, and he’s asked his friend Atticus O’Sullivan, the last of the Druids, to help take down this Norse nightmare.

One survival strategy has worked for Atticus for more than two thousand years: stay away from the guy with the lightning bolts. But things are heating up in Atticus’s home base of Tempe, Arizona. There’s a vampire turf war brewing, and Russian demon hunters who call themselves the Hammers of God are running rampant. Despite multiple warnings and portents of dire consequences, Atticus and Leif journey to the Norse plain of Asgard, where they team up with a werewolf, a sorcerer, and an army of frost giants for an epic showdown against vicious Valkyries, angry gods, and the hammer-wielding Thunder Thug himself. 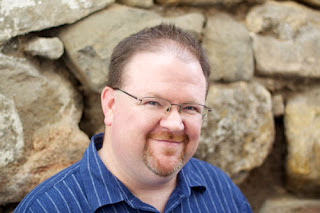 Kevin Hearne is a native of Arizona and really appreciates whoever invented air-conditioning. He graduated from Northern Arizona University in Flagstaff and now teaches high school English. When he's not grading essays or writing novels, he tends to his basil plants and paints landscapes with his daughter. He has been known to obsess over fonts, frolic unreservedly with dogs, and stop whatever he's doing in the rare event of rain to commune with the precipitation. He enjoys hiking, the guilty pleasure of comic books, and living with his wife and daughter in a wee, snug cottage.

What:  One commenter will win a signed, personalized author copy of Hounded (The Iron Druid Chronicles 1) directly from Kevin!


Druids or gods?
Please remember - if you don't answer the question your entry will not be counted.

Who and When:  The contest is open to all humans on the planet earth with a mailing address. Contest ends at 11:59pm US Eastern Time on Tuesday, May 10, 2011. Void where prohibited by law.


*Giveaway rules are subject to change.*
Posted by Qwill at 9:27 AM