Please welcome Virna DePaul to The Qwillery as part of the 2011 Debut Author Challenge Interviews.

Virna:  I can write really fast. I wrote the partial for Chosen By Blood (my debut paranormal romantic suspense) in a weekend. Then, when an editor told me she needed the full in order to buy it, I got the full manuscript to her within a month (and that included having my awesome agent review it). Of course, I revised and polished it after it sold, but I was proud of the initial version, too. I'm thankful I don't have to write that fast regularly, and I've certainly experienced "writer's block," but I think one of the reasons I ultimately sold is because of my speed.

Virna:  Larissa Ione, JR Ward, Rhyannon Byrd, Lori Foster, Anne Stuart, Linda Howard are just a few. Lori Foster and Linda Howard have probably been the biggest influences on my writing. I love how they can balance an external plot with a romance. They both create sexy heroes and strong, relatable heroines.

Virna:  I'm a pantser with plotter tendencies. I wrote my first three manuscripts without plotting them. However, once I began submitting on partials, I learned to write a synopsis, an outline of the novel from beginning to end. I generally stick to the synopsis, but have no problem changing things as I write if I need to.

TQ:  Describe Chosen By Blood in 140 characters or less.

Virna:  Five years after the Second Civil War ends, humans and Otherborn— humanlike creatures with superhuman DNA—still struggle for peace. To ensure the continued rights of both, the FBI forms a Para-Ops team with a unique set of skills.

Leader of an Otherborn clan, half-breed vampire Knox Devereaux would do anything to find a cure for the anti-vamp vaccine slowly starving his people into extinction. When the FBI contacts him about leading a team of hand-selected Others on a mission to reclaim the stolen antidote, Knox accepts. His new assignment places him in direct contact with Special Agent Felicia Locke, the beautiful human he’s craved since their very first meeting.

TQ:  What inspired you to write the Para-Ops series?

Virna:  I started writing contemporary romantic suspense. When I was challenged by my agent to write a "big book" series to increase my chances of selling, I realized I love paranormals and editors couldn't get enough of them, so why not try writing one that combines elements of the special ops teams I love, and a whole new kind of supernatural world. One where supernatural creatures and humans must band together despite years of mistrust and war in order to finally attain peace. When I came up with the idea for the Para-Ops team, I thought of it as "special ops with fangs" or a cross between X-men and Romancing The Stone.

TQ:  What sort of research did you do for the Para-Ops novels?

Virna:  I did a lot of research on the Internet, including research on North Korea, how to parachute from a plane in a high tech bat glider suit, and what kinds of special ops teams the FBI has developed. In addition, I reread many of the the paranormal books I'd already read to figure out how I could make my series different.

TQ:  Who was the easiest character to write and why?

Virna:  I definitely formed an idea of Knox Devereaux, the hero of Chosen By Blood, right away. I knew I wanted him to be alpha, but also elegant, honest, and honorable to a fault. His conflict and internal flaw--the inability to balance duty with desire--formed early on, as well, and helped give my story forward momentum. Hardest and why? I'd say the hardest character to write was Wraith. She's the team's ghost, and she's a blend of prickly bitchiness and vulnerability. I wanted to do her character justice by showing the pain of her background (she wakes up in an alley one day with no memory or vital signs), but also give her enough humanity so that readers can root for her as the heroine of Book 2.

Virna:  I'm contracted for two books and an option book. I'm currently writing the proposal for Dex Hunt, the team's werebeast, Book 3. Fingers crossed the first two books do well and Berkley picks up the third. I'd love to see Book 3s cover as I absolutely love the first two.

Virna:  Thankfully, I'm lucky to write for two wonderful houses. I write the paranormal books for Berkley, but I also get to write contemporary romantic suspense for Harlequin. My debut Harlequin Romantic Suspense, Dangerous To Her, launches in September 2011. It's about an undercover cop who investigates a judge and ends up reuniting with his college love. Then in April 2012, my new series with HQN launches. I've also already self-published several novels, under Virna DePaul and Ava Meyers, and I plan on continuing to do that.

Virna:  Thank you so much, Sally. It's been a pleasure being with you today! 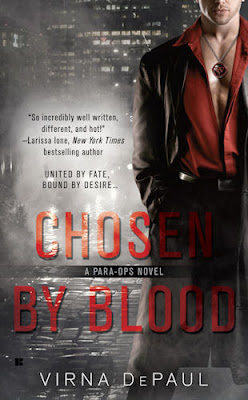 Five years after the Second Civil War ends, humans and otherborn- humanlike creatures with superhuman DNA-still struggle for peace. To ensure the continued rights of both, the FBI forms a Para-Ops team with a unique set of skills. 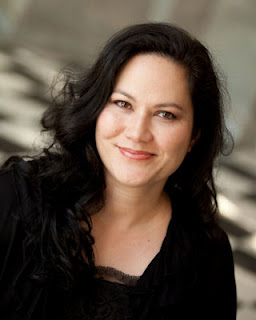 Virna DePaul is a former criminal prosecutor whose debut mass market paranormal romantic suspense novel, Chosen By Blood (Book 1 in the Para-Ops series), comes out May 3, 2011 by Berkley Books but is available for pre-order now! In addition, Virna writes contemporary romantic suspense for Harlequin Romantic Suspense (Dangerous To Her, September 2011) and HQN (new series launching April 2012). Virna has also self-published several novels, including "A Vampire's Salvation," "This Magic Moment," and the craft book "Love Writing: How To Write And Publish Your Romance Novel Without Losing Your Perspective, Passion or Sanity." Visit her at http://www.virnadepaul.com/.

What:   Virna says: "I'd like to give away to one random commenter a Para-Ops tote filled with a Para-Ops mug, chocolate, sunglasses and other goodies, including a copy of my vampire e-novella, A Vampire's Salvation.  Open to international participants."


What is your favorite supernatural being?
Please remember - if you don't answer the question your entry will not be counted.

Who and When:  The contest is open to all humans on the planet earth with a mailing address. Contest ends at 11:59pm US Eastern Time on Thursday, May 19, 2011****. Void where prohibited by law.