Due to the Blogger outage this interview has been reposted and the date for giveaway entries extended for 1 day. If you have already entered, please note that I have your comment, but you are welcome to comment again.

Please welcome K.M. Ruiz to The Qwillery as part of the 2011 Debut Author Challenge interviews.

K.M.:  Thank you for letting me stop by! As for a quirk, I guess you could say I have a habit of writing in layers. I’ll write bare-bones stories, then go back and fill in more details. I assume the reader doesn’t need or want every last nitty gritty word in my head, so I’ll write ten words when I should really be using more. Then I’ll print it out in hard copy and continue adding stuff. It’s a weird process.

K.M.:  I’m kind of a mix. I’m a plotter, in the sense that I’ve got an overall idea for a series and I usually know how a book will end before I figure out the beginning and middle. I’ll have a few major events that I know have to happen and I’ll write my way to them, which is where the punster part comes in. The mixture gives me a little more freedom. I find a chapter by chapter outline to be restricting, at least for me, but for the most part I do know the major things that need to happen before I start writing, I just have to get there.

K.M.:  Post-apocalyptic tale where human and psion survivors of nuclear war fight for their future but the best answer isn’t always the right one.

TQ:  What inspired you to write Mind Storm?

K.M.:  I loved comics growing up as a kid. Even though I haven’t been into them for quite a few years now, comics are still a big inspiration. I liked how a lot of the big plot arc questions in comics were never answered until the very end of the story (if then), but I also liked how there wasn’t always a clear-cut answer. Comics are great when it comes to the morally gray area and I tried to emulate that here.

TQ:  What sort of research did you do for the Strykers Syndicate novels ?

K.M.:  Actually, quite a bit now that I think of it. I did some research on certain incurable diseases and how the body changes because of it to help differentiate psions from humans in the story. I’ve always been really into the sciences dealing with the human body, though I’m not an expert by any means. I wanted to try to ground psion powers as much as possible within the confines of the human body and digging through medical possibilities helped me with that. As much as I love comics, I wanted the story to be less fantastical in some ways.

I also did some research on the aftereffects of nuclear fallout, how it shows up as disease even generations down the line and how those same people are treated, both medically and culturally. In light of what happened recently in Japan, I won’t delve too deep. I will say that the tragedy in Chernobyl and a photo essay book called Chernobyl Legacy done by photographer Paul Fusco helped me form some ideas for the segregated society in Mind Storm. Even today people discard others who don’t fit their vision of normal and I wanted to bring that into the story.

TQ:  Without giving anything away, what is/are your favorite scene(s) in Mind Storm?

K.M.:  Some of my favorite scenes would give away too much, so I’ll skip those! I like the scene between Lucas and Matron (a human scavenger), where they’re sitting in an abandoned weather station right before everything goes to hell. I like how it shows their motivations and how far they’ve come, that a psion and a discarded human can actually work together.

K.M.:  Lucas was the hardest character for me to write because I never got into his head. He’s very much a driving force of the plot, but I unintentionally wrote him with having a distance from the reader that was frustrating at times. And then I had to keep writing him like that for both books. Talk about wanting to strangle a character! Threnody was the easiest because I knew what motivated her, but I never got deep into her head either. She’s a soldier and soldiers are supposed to obey without question in this story and I wanted to showcase that attitude by not delving too much into her emotions. Threnody does learn to start questioning the status quo and that’s what made her easier to write than pretty much everyone else.

K.M.:  Two books are planned so far. The second book is coming out sometime next year. I don’t know when yet, but I’m hoping spring.

K.M.:  I’m working on the second book, though I don’t know what title we’re going to use. A lot of the questions I purposefully left unanswered in Mind Storm get addressed in book two, I promise! I’m also working on a proposal for something else that I don’t want to say too much about since I’m still in the planning stages of it. It’s something I’m really excited about though. 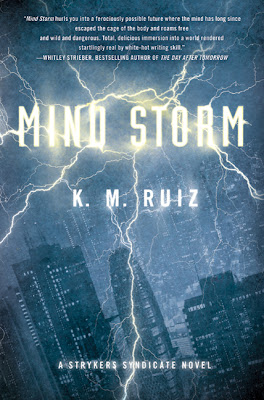 After the world was nearly wiped out by a nuclear war 250 years ago, what’s left of society fights over the scraps of the Earth as the rich and powerful plan to secretly ascend to another planet. But the deadly new breed of humanity that the rulers have enslaved to protect their interests is about to change everything.

This is the story of Threnody Corwin, a psion with the ability to channel electricity like lightning through anything she touches. As a soldier-slave for the human government, Threnody is recruited by an unknown enemy: the son of Earth’s most powerful human family.

But Lucas Serca is far from human and he intends to make Threnody and her fellow psions meet their destiny, no matter how many people he has to kill to do it. Mind Storm chronicles the fight for survival by the psions and other gene-trash humans, before they’re killed by a corrupt world government or left to die on a crumbling Earth.

Strykers Syndicate 2 will be released in 2012. 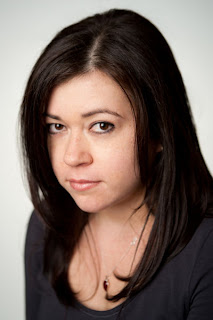 K.M. Ruiz lives in California with a cat or two for company and the occasional earthquake. She earned a B.A. in English (concentration in Creative Writing) and a minor in American Indian Studies from San Francisco State University. She likes her movies loud, her music louder, and when not writing, can be found traveling, looking for new ideas.

What:  One commenter will win a hardcover copy of Mind Storm generously provided by K.M. Ruiz.


Science Fiction, science fact, or both?
Please remember - if you don't answer the question your entry will not be counted.

Who and When: The contest is open to all humans on the planet earth with a mailing address. Contest ends at 11:59pm US Eastern Time on Friday, May 20, 2011. Void where prohibited by law.


*Giveaway rules are subject to change.*
Posted by Qwill at 9:16 AM