TQ:  What would you say are your most interesting writing quirks?

Heather:  Making up words and using real words incorrectly. I was picked on by my old critique group for years for that quirk, and I think our editor recently discovered it as well with my creative use of the word “stealthed,” which I’d used as a verb.

Laura:  Writing myself into a corner and leaving Heather to figure out how to get me us out of it. Okay, I call it a quirk, that goes right along with my inability to think about logic when in the midst of a scene, but I’m sure Heather would classify it as a major pain in her rear-end.

Heather:  My love for J.K. Rowling’s world building is unrivaled – for Julie Garwood’s characterization… for Susan Elizabeth Phillips’s way with humor and heart. They’re all three at the top of my list.

Laura:  Stephen King for his ability to take the simplest things and make them scary. J.K. Rowling’s for her storytelling skills. Jude Deveraux for her characterization and gifting one of my children with a love for reading.


TQ:  Are you plotters or pansters or a combination?

Heather & Laura:  We’re both pantsers at heart, but when you work on deadline, you have to pick up the disciplined traits of a plotter (unless you’re Nora Roberts or Stephen King) because you have to submit a synopsis of the book before it’s even written. Whether or not we stick to that synopsis…

Heather & Laura:  Vampyre doesn’t like humans. Must save them anyway.


TQ:  How did you collaborate to write Ascension?

Heather:  I usually will set up the plot and break down the scenes and provide a schedule. From there, we stick to the breakdown unless something feels wrong or needs tweaking.

Laura:  Once the hard work’s out of the way and we’ve agreed to everything that needs to happen as we see it at the moment, we work off each other’s scenes, letting the story build—and give us little surprises when things happen that we weren’t expecting or didn’t see coming. Since we pass the pages back and forth, each writing session starts with a round of editing, then it’s off to work on fresh pages to reach our daily quota.


TQ:  What inspired you to write Ascension?

Heather:  I was watching something completely unrelated on T.V. and got an image in my head of a woman hiding in a dumpster with police helicopters flying over head. She was rescued by a Vampyre who turned out to be Kyana. That scene was trashed and Kyana took the dumpster girl’s place as heroine, and Ascension was born.

Laura:  When she asked me to read that scene, I called her, all excited and told her she had to write the story because I was really interested in learning why the woman was hiding in the dumpster and what happened to her. She asked if it was something I’d like to work on too, and after making sure she wasn’t kidding, I let the idea of a creature with glowy red eyes take shape in my head. (That scene was cut, too, but Ryker’s claim as hero remained.)


TQ:  What sort of research did you do for Ascension?

Heather & Laura:  Fun stuff! We walked around St Augustine and took pictures, mapped out the fort that we used for our headquarters, ate lunch….. Then there’s the mythology research which wasn’t a chore either. The rest was pretty much made up!


TQ:  Without giving anything away, what is/are your favorite scene(s) in the book?

Heather: I have to say, there’s a scene where Ryker takes a little swim in the River Styx that I enjoy quite a bit.

Laura:  I’m particular to a little fight scene where Kyana learns that there are some she can’t intimidate. Doesn’t stop her from trying, but he definitely leaves his mark on her.


TQ:  How many books are planned for the Dark Breed series?

Heather & Laura:  As many as the readers and our editor want!

Heather  & Laura:  Book 2 is still untitled, but is due for release in January 2012. Book 3 is turned in, no title or release date, but you’ll see many of the characters from Ascension in both of those.

Heather & Laura:  Thank you so much for having us! This was fun!! 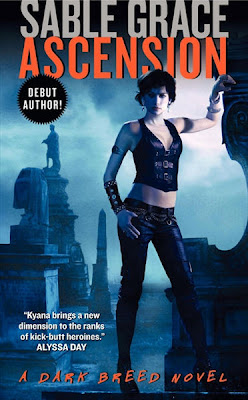 The gates of hell have opened, and one woman will stand in the crossfire as the Dark Breed—vampyre, demons, shape shifters—and mankind fight their last battle for survival.

Kyana is half Vampyre, half Lychen . . . and the last of her kind. Determined, dangerous, and damned, she has no love for the mortals who have imprisoned and misused her. But when the Order of Ancients entrusts her with a mission—to find the key that will send the Dark Breed back into Hell for eternity—Kyana has no choice but to accept.

She is furious to learn her assignment comes with an escort . . . Ryker, a demigod and fierce warrior who long ago found a way under her skin and stayed there. In a shaky alliance, they discover an ancient cult with dangerous motive and a god who seeks to destroy all others. And as Kyana begins to feel the heat that threatens to bind her to Ryker, she knows she has to resist. For it could only mean the undoing of them both . . . 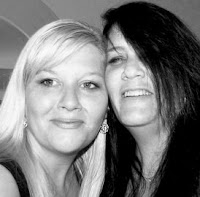 Sable Grace is the writing team of Heather Waters & Laura Barone, long time critique partners and friends who came together by fluke to discover their voices fit together quite nicely during an experiment of "I'll write the first sentence, you write the next." It was meant to be nothing more than a warm up exercise for each of them to get started on their own projects, but soon, the story became far more interesting than what they were supposed to be working on and Sable Grace was born.

Both Heather and Laura reside in Florida, are happily married, and are, well, complete opposites. (Think the Odd Couple on crack here.) Still, there's enough common ground for them to weave their words together in the voice of Sable Grace.

Heather also writes medieval romances under her real name, which you can find at www.heatherwaters.net, and Laura is a Golden Heart finalist for her highly sensual manuscript, Mr. Right Now.

What:  One commenter will win a mass market paperback copy of Ascension(Dark Breed 1).


Which Greek god, goddess, or demigod is your favorite?
Please remember - if you don't answer the question your entry will not be counted.

Who and When: The contest is open to all humans on the planet earth with a mailing address. Contest ends at 11:59pm US Eastern Time on Tuesday, May 3, 2011. Void where prohibited by law.


*Giveaway rules are subject to change.*
Posted by Qwill at 8:04 AM