Superman is our largest hermit crab. He's about 5 years old. Superman is friendly and very social. Earlier this week he surprised us by molting or as we like to call it "pretending he is dead." Superman is my son's pet so we had a tense week.
At first we thought that something had happened to Superman. All we saw was a broken apart exoskeleton. Then we spotted his new pink-ish self peering up through the substrate: 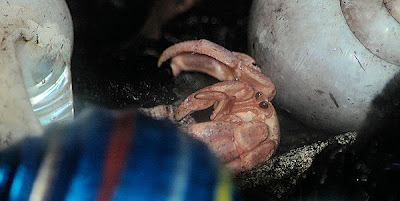 Over the next day he pulled himself out of the substrate and very slowly to his shell. On Tuesday morning, he was fully on top of the substrate, on his side and still shell-less. I left the house for a couple of hours. He was re-shelled by the time I returned home: 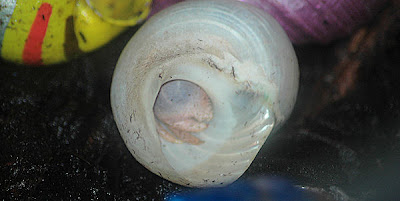 Friday morning I gave Superman an extra long misting, which seemed to perk him up. I found a small shell dish, filled it with water and a sea sponge and placed it down in the substrate just below him so he would not have to climb or try to get to the other water dishes (plain and salt water). Hermies are exhausted after a molt so I did not want it to be difficult for him to get more water. He immediately started drinking from and eating the sea sponge. A bit later he began to eat his discarded exoskeleton, which is full of nutrients that he needs. 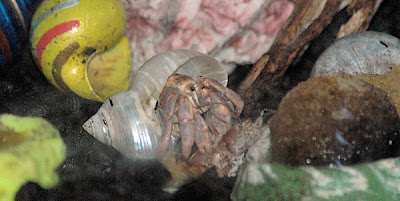 We're not entirely out of the woods yet. I hope Superman continues to drink and eat and regains his strength. He's very special to us.
This is one of our favorite fiction books about Hermit Crabs: 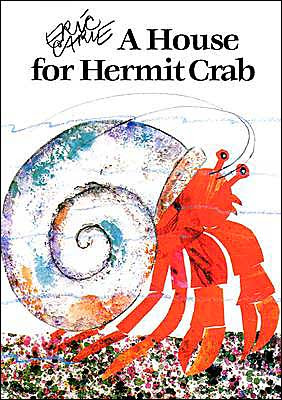 Poor Hermit Crab! He's outgrown his snug little shell, so he finds himself a larger one -- and many new friends to decorate and protect his new house. But what will happen when he outgrows this shell and has to say good-bye to all the sea creatures who have made Hermit Crab's house a home?

Children facing change in their own lives will relate to Hermit Crab's story -- and learn a lot about the fascinating world of marine life along the way. Simon & Schuster