Maureen:  I don’t know whether or not it’s interesting, but even after I’m happy with my work on the screen, I need to do several rounds of pen and paper editing. I don’t know if it’s because my brain sees things differently when they’re printed out, but I always do edits that way. It’s not terribly efficient, but it’s what works for me. My on paper editing is almost always done in coffee shops. One local barista asked me if their shop was going to get royalties. J

Maureen:  I love all kinds of novels across most genres of fiction. There are too many to list, but Robertson Davies, John Irving, Anne Rice, Anne Tyler, Emily Giffen, and J. R. Ward are examples of authors whose entire backlist I gobbled up as soon as I read one. I’m not sure if I’ve been directly influenced by any particular authors, but Suzanne Collins definitely inspired me to not be afraid to put young characters in danger. Certainly in traditional fairy tales the characters face life or death situations.

Maureen:  I’m a mix of the two. I do believe I can create a story with more coherence if I go in with an overall plan—at least the broad strokes of a plan—but the most exciting elements in my stories often happen while I’m at the keyboard. These moments of inspiration often lead me in unexpected directions, and when I inevitably hit a wall, I go back and plan again. Plot, pants, (rinse), repeat in what sometimes seems like an infinite loop.

I have written detailed synopses for entire books before starting them—Cinderella: Ninja Warrior being one—but then I never seem to stick to the plan. This was particularly challenging for the Twisted Tales books because of the complicated structure.

Speaking of the structure, some early readers of these books have said they wished there were multiple endings and/or “wrong” paths to follow, like there were in some other choose-your-own-adventure stories. With hindsight, I almost wish I’d done that too, because it would have been much less complicated/challenging than writing alternate paths to the same place. But I think fairy tales promise fairly specific happy endings—true love, good triumphing over evil, winning against the odds—and I wanted to deliver on those inherent fairy tale promises.

Also, I like the idea that my characters are smart and brave enough to get themselves out of any bad situation they might face, no matter which decision the reader chooses for them. I don’t think there’s ever one right answer in life, so why should there be for my characters?

Maureen:  For Cinderella: Ninja Warrior, I liked the idea of “fixing” some of the elements of the traditional story that bothered me. The original Cinderella character was too much of a victim for my taste, waiting around for a handsome prince to save her. I wanted to create a strong heroine who was doing all she could to save herself. I also never liked the idea that the prince needed a shoe to recognize her the day after supposedly falling in love, or that he fell in love with her because of her beauty (which he couldn’t even recognize when she wasn’t in a fancy dress!). What kind of message does that send to modern young readers about love?

There were two basic idea seeds for Sleeping Beauty: Vampire Slayer. One came from linking the darkness inherent in the Sleeping Beauty story with vampires. That idea was like being hit by lightning. The other came from the, I think creepy, idea of a girl whom others watch while she’s sleeping—the idea of being so exposed and vulnerable and helpless. But again, I wanted an active heroine—hard to make a girl who’s asleep an active heroine—so the idea of a double curse, and isolating my Sleeping Beauty from her family whenever she was awake, was the result.

TQ:  Do you consider the books mash ups or something else?

Maureen:  I hadn’t thought of them as mash ups until others started saying that, mostly based on the titles, I assume. I consider these books more as re-tellings, or re-imaginings, or even re-boots, than mash ups. I think a lot of the recent books considered mash-ups actually use the original source material, lifting lines and scenes and dialogue as well as story elements. I don’t think that’s what I did, although I did follow the traditional fairy tale structure more closely with Cinderella.

I suppose one could argue that I’ve mashed up genres, combining fairy tales with paranormals, but I don’t think the stories themselves are mash ups. At least not based on my definition. I prefer re-boot or re-imagining.

Maureen:  I read some of the old (and I mean centuries old) versions of the fairy tales, mostly to better understand which story elements were “original” and which were added by modern adapters of the stories, like Disney. I also did some research on martial arts for Cinderella, but for the most part, all of the details in both of these stories came more from my imagination than from research. I’m a former gymnast and I if that counts as research, it probably did help me write some of the more acrobatic scenes.

TQ:  Without giving anything away, what is/are your favorite scene(s) in either book?

Maureen:  That’s a great question! It’s hard to choose, but I particularly enjoyed writing the magic competition scenes in Cinderella: Ninja Warrior, as well as her altercations with her stepmother. I do enjoy writing action and putting my characters in danger. I also love the action scenes in Sleeping Beauty: Vampire Slayer, but in that story I also love the scenes where she first meets Alex and Tristan, and the scenes with her parents.

Thinking back to your plotting vs. pantsing question, I had no idea when I did my initial plotting for Sleeping Beauty: Vampire Slayer that it would be a story about a child coping with divorcing parents, but that became a major theme as soon as I started thinking about how parents might react if they knew their daughter carried a curse.

TQ:  How many books are planned for the Twisted Tales series?

Maureen:  I have lots of ideas up my sleeve, and a couple plotted out, but right now there are no firm plans for more. I hope that I’ll be able to announce something soon.

Maureen:  I’ve been working on another series for young adults, which is much darker and skewed to a slightly older audience—less appropriate for the youngest readers of Twisted Tales—but I can’t talk specifics right now. Stay tuned!

Maureen:  Thank you so much for having me! 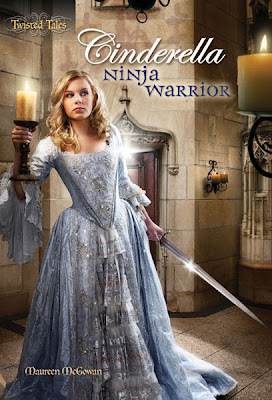 In this fast-paced story full of adventure and romance, Cinderella is more than just a servant girl waiting for her prince—she's a tough, fearless girl who is capable of taking charge of a dangerous situation. Seeking to escape the clutches of her evil stepmother, Cinderella perfects her ninja skills and magic talents in secret, waiting for the day when she can break free and live happily ever after. In a special twist, readers have the opportunity to make key decisions for Cinderella and decide where she goes next—but no matter the choice; the result is a story unlike any fairy tale you've ever read! 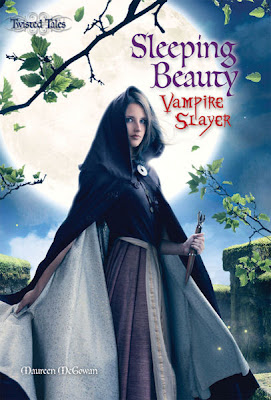 In this thrilling story full of adventure and romance, Sleeping Beauty is more than just a lonely princess waiting for her prince—she's a brave, tenacious girl who never backs down from a challenge. With vampire-slaying talents that she practices in secret, Sleeping Beauty puts her courage to the test in the dark of night, fighting evil as she searches for a way to break the spell that has cut her off from her family. In a special twist, readers have the opportunity to make key decisions for Sleeping Beauty and decide where she goes next—but no matter the choice; the result is a story unlike any fairy tale you've ever read!

Sleeping Beauty: Vampire Slayer is an entirely new type of fairy tale–one that will keep today's kids guessing and offer them hours of magical fun. 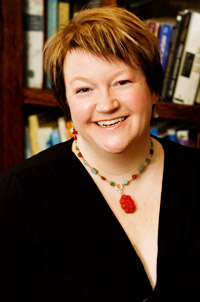 Maureen has always been making up stories--her mother called it lying, her teachers creative talent--but sidetracked by a persistent practical side, it took her a few years to see the light and channel her energy into writing novels. After pummeling her sensible side into submission, she quit her career in finance and hasn't looked back.

Aside from books and writing, she's passionate about art, dance, films, fine handcrafted objects and shoes. Maureen (and her shoes) go to a lot of movies in Toronto, Canada.

What:  One commenter will win her/his choice of Cinderella: Ninja Warrior or Sleeping Beauty: Vampire Slayer.

What is your favorite fairy tale?
Please remember - if you don't answer the question your entry will not be counted.

Who and When: The contest is open to all humans on the planet earth with a mailing address. Contest ends at 11:59pm US Eastern Time on Friday, April 15, 2011. Void where prohibited by law.