MULTIPLE AWARD WINNING BATWOMAN TEAM J.H. WILLIAMS III & W. HADEN BLACKMAN TO LAUNCH HIGHLY ANTICIPATED ECHOLANDS SERIES THIS AUGUST
“It's every fictional world, each with its own artistic style, intersecting and exploding with JHW3 magic and crackle. I can't wait to see where he and Haden Blackman are taking us—into a world in which anything can happen, and undoubtedly will.” —Neil Gaiman
PORTLAND, Ore. 05/21/2021 — Yesterday The Hollywood Reporter revealed an exclusive first look at covers and interior artwork from the eagerly anticipated Echolands series by J.H. Williams III (Promethea, The Sandman: Overture, Batman), W. Haden Blackman (Star Wars, Elektra), colorist Dave Stewart, and letterer Todd Klein. This long awaited comic book event from the multiple award winning Batwoman creative team will launch from Image Comics in August and push the boundaries of storytelling to its limits.

The new series will present a sprawling, eye-popping tale and feature lush, career-defining artwork and a mesmerizing story in a unique landscape format. Each issue of the series will offer a Raw Cut edition, featuring the art from J.H. Williams III as it looked when leaving his work studio.

"I’m beyond excited we’re finally bringing Echolands to everyone, and incredibly stoked to be reunited with longtime creative partners Haden, Dave, and Todd, for what is a vast challenging world building project unlike any other we’ve attempted before," said Williams III. "It’s a lifelong dream years in development, featuring an amazing cast of characters that we believe you’ll love as much as we do. And we’re so proud to be under the welcoming Image Comics banner, the premiere publisher for innovative entertaining stories."

Set in a bizarre future world that has forgotten its history, Echolands follows a reckless thief Hope Redhood. Hope holds the key to excavating a strange, dark past—but only if she and her crew can escape a tyrannical wizard and his unstoppable daughter. But fate will send them all on a path leading to a war between worlds.

Blackman added: “Echolands has been over a decade in the making, but I can still vividly remember my first call with Jim about the concept. What began as a story about a thief on the run from an evil Wizard has evolved into a worlds-spanning adventure with a cast that includes everything from vampires to classic gangsters. Image is the perfect home for this eclectic project, and I'm thrilled that we’re finally able to share Hope’s journey."

Echolands is a mythic fiction epic where anything is possible; a fast-paced genre mashup adventure that combines everything from horror movie vampires to classic mobsters and cyborg elves, to Roman demigods and retro rocket ships. It’s going to be a helluva ride!

Echolands #1 will also be available for purchase across many digital platforms, including Amazon Kindle, Apple Books, comiXology, and Google Play.
Early praise for Echolands:

“It's every fictional world, each with its own artistic style, intersecting and exploding with JHW3 magic and crackle. I can't wait to see where he and Haden Blackman are taking us—into a world in which anything can happen, and undoubtedly will.” —Neil Gaiman, The Sandman, American Gods

"So complex and unique and expertly executed it pushes the medium forward in new directions and leads to invigorated interest in the medium of comics itself." —Robert Kirkman, Invincible, The Walking Dead

“Echolands’ fallen fantasy San Francisco is painted as a monstrous blend of magic and technology, and reads like a blockbuster car chase.” —Kyle Shutt, The Sword

“Getting an eyeful is a massive understatement. I love looking at the drawings as they expand with more details emerging every time I look.” —Debbie Harry, Blondie, Face It: A Memoir

“The integration of image and story develops an archetypal language that’s here in these pages and in our subconscious simultaneously. The boundaries are pushed. I think I’ve seen some of these things in dreams." —Chris Stein, Blondie, Point Of View: Me, New York City, and the Punk Scene

“If there was not a single word on the pages, Echolands would be worth reading just to explore this lusciously detailed world of giants, vampires, wizards, armies, ghosts, pirates, robots, cowboys and other armies, all laid out in exquisite double page spreads by JH Williams that carry your eye from one end of the book to the other. But as a matter of fact, there are words, glorious words by JH and W Haden Blackman that tell the story of Hope and the 'Red' power she cannot control; of the jewel she stole from the evil Demond; and her loyal partner in crime Cor.  Oh, and did I mention 'Old Chicago?'  I am just two issues into this rollicking adventure filled with everything I have ever loved, I have a million questions, and I am hooked.” —David Mandel, Executive Producer of Veep

“Echolands by W. Haden Blackman and JH Williams III is a high-stakes action/adventure in surrealist locales thick with reverb. It’s bustling with wayward characters and stars a hooded protagonist full of moxie, mirth and red magic. The bonus back matter is both counterpoint and secret code to the main story. Echolands is clearly their magnum opus.” —Shelly Bond, Editor of Bitter Root, The Sandman: Overture

“One of the most remarkable, innovative, and engrossing uses of the medium I’ve seen. From the rich cast, a story that hooks you from page one and drags you in, to the labyrinthine page layouts that turn your head inside out to read them. There are few comics that deliver a genuinely unique experience, but this one really does, feeling at times like a top down tabletop roleplaying game, and at others a trippy immersive VR story, but always with the bounce and ease of reading that you would expect from a great comic. The boundaries of a comic page are always waiting to be pushed, and Echolands does this masterfully, hinting at what might be possible, making us excited to turn the page.” —Leah Moore, The Doors: Morrison Hotel, Conspiracy of Ravens, Ghost Stories of an Antiquary

“Echolands is utterly gorgeous and completely compelling. A fabulous cast of characters, and a story that hits the ground running. I’m hooked, and I can’t wait for the next issue.” —Kat Howard, Books Of Magic, An Unkindness of Magicians 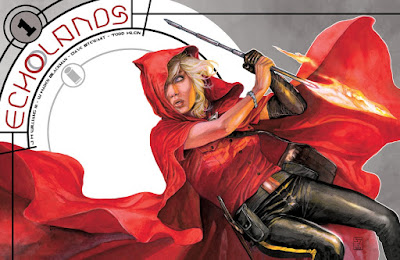 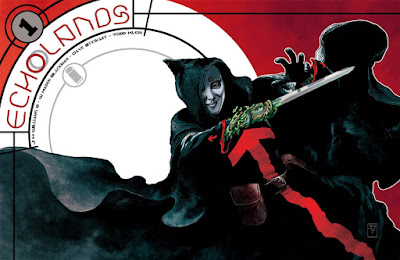 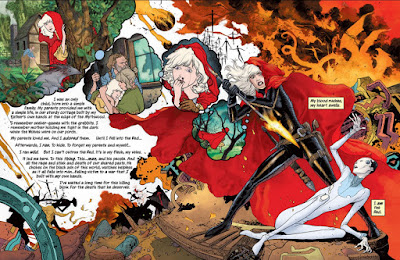 [click to really embiggen]
ABOUT IMAGE COMICS
Image Comics is a comic book and graphic novel publisher founded in 1992 by a collective of bestselling artists. Image has since gone on to become one of the largest comics publishers in the United States. Image currently has six individuals on the Board of Directors: Robert Kirkman, Erik Larsen, Todd McFarlane, Marc Silvestri, Jim Valentino, and Eric Stephenson. It consists of five major houses: Todd McFarlane Productions, Top Cow Productions, Shadowline Comics, Skybound Entertainment, and Image Central. Image publishes comics and graphic novels in nearly every genre, sub-genre, and style imaginable. It offers science fiction, fantasy, romance, horror, crime fiction, historical fiction, humor and more by the finest artists and writers working in the medium today. For more information, visit www.imagecomics.com.
Posted by Qwill at 10:50 AM