Interview with Chris Panatier, author of the Phlebotomist


Please welcome Chris Panatier to The Qwillery as part of the 2020 Debut Author Challenge Interviews. The Phlebotomist was published on September 8, 2020 by Angry Robot. 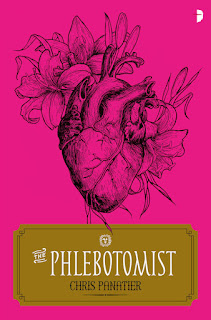 Chris:  Thanks for asking me onto your blog! As far as my first fiction piece, this would have been during grade school, when I was perhaps ten or eleven years old. I recall some slapped together knight and dragon fantasies based on some Dungeons & Dragons I’d played. I never wrote more than three or four pages as I discovered that writing is hard and I was lazy. As a kid I was definitely more attracted to the idea of writing rather than the actual doing of it.

Chris:  I am a total pantser when I sit down to write the words, but it would be inaccurate for me to say I do that to the exclusion of plotting. I do an immense amount of plotting before I begin the book, though I write down very little. I don’t like to feel hemmed in or committed to ideas and writing them down seems to do that. The premise, character, and plot ideas sit in my brain like a nebula and I just let them coagulate on their own. At some point, when the general direction becomes clear, I’ll sit down to write. Things are never fully fleshed out before I start, as the process tends to do this for me.

Chris:  Valid self-doubt. Writers like to talk about imposter syndrome. Some of it is likely attributable to the particular neuroses that accompanies writing. I think it has something to do with the empathy and observational awareness we’re constantly employing in order to understand characters and people. Writers are already wired, I think, to be hypervigilant and overly self-critical. For me, this invariably crops up during the writing process when comparing my imagined story to what actually ends up on the page. They don’t always match no matter how hard I try.

Chris:  Having been a visual artist for so long before I got serious about writing, I knew I loved creating something from nothing. Turns out I enjoy building with words even more than I do with pencil, ink, or watercolor. And I want to push that creativity as far as I possibly can while still maintaining a coherent story. I am influenced and inspired by writers who do that. I think about Cameron Hurley, Philip K. Dick, Jeff Vandermeer, N.K. Jemisin, and Tamsyn Muir right off the bat.

TQ:  Tell us something about The Phlebotomist that is not found in the book description.

Chris:  There’s a murderous teenager in it.

TQ:  What inspired you to write The Phlebotomist? What appeals to you about writing Science Fiction?

Chris:  I was (and am) very angry about income inequality and the lengths to which the ruling class will go to keep the rest of the population under its boot. I decided that marrying a near future science fiction story with an apt fantasy trope was the best way to make my point. Science Fiction has always been such a great way to explore social and political issues. Sometimes when you remove events and conflicts from their present context and place them into another setting, they gain clarity. Also, readers’ alliances and prejudices are often challenged.

TQ:  What sort of research did you do for The Phlebotomist?

Chris:  Oh, a lot. The society of The Phlebotomist is based upon a government-mandated blood draw called the Harvest and a cash-for-blood exchange called the Trade. There is varying demand for each of the blood types based on their compatibility with potential recipients—so each type fetches a different price. Society is thus segregated by blood type. Since I was creating an economy based on blood, I had to make sure it was scientifically accurate. I did plenty of internet research, bought a Phlebotomist’s Quick Reference Guide (laminated), and reached out to experts in the area. Some even talked to me! Amazing.

TQ:  Please tell us about the cover for The Phlebotomist.

Chris:  This cover brings me absolute joy. I wanted it to be hot pink from day one and this thing is more like surface-of-the-sun pink. It’s brilliant. Angry Robot keyed in on doing a vintage medical illustration theme, which I love. I ended up doing the illustration of the heart and lilies. The cover itself has five distinct nods to parts of the story.

TQ:  In The Phlebotomist who was the easiest character to write and why? The hardest and why?

Chris:  The excommunicated marine long-gun specialist turned blood hacker, ‘Lock’ came most naturally to me. She’s this older woman who is tired of your shit. I had a very specific old friend in mind when I wrote her. Maybe that’s why her distractable manner of speaking—a hybrid tech-slash-frontier gibberish—came so naturally to me. She’s also a bit unhinged. So I relate.

The hardest character to write was the protagonist, Willa. This is interesting because I know who she is. Her personality, brains, values, fears, and motives were all very clear to me from the start. It got hard when she was thrust into a string of increasingly bonkers situations that nobody in history has ever actually been subject to. Figuring out how a real person would react when dropped into one of these scenarios had me doing a lot of trial and error to make sure I got it right.

TQ:  Does The Phlebotomist touch on any social issues?

Chris:  The Phlebotomist is an allegory for a number of social issues. Segregation is front and center. Interestingly, this is an issue that many people (including a number of Justices on our Supreme Court) might believe is no longer relevant, but I think it’s more relevant than ever. The story also grapples with wealth inequality, urban food deserts, privacy, and consent.

TQ:  Which question about The Phlebotomist do you wish someone would ask? Ask it and answer it!

Q: Did you ever entertain any other potential titles for the book?
A: I briefly considered calling it The Evens. If you read it, you’ll see why!

TQ:  Give us one or two of your favorite non-spoilery quotes from The Phlebotomist.

“Holy shit, Willa, you look like Beelzebub,” said Lock. “Rub a little of that inside Llydia so it looks like you brained yourself genuinely.”

Chris:  I have a few short stories coming out soon. I’m always plugging away on those as it’s nice to start and finish something when novels take so long. As for novels, I took a flyer on this absolutely insane premise and I’m almost done with the first draft. It’s so nuts that I don’t know if I’ll ever even show it to anyone. Sort of The Matrix + Monsters, Inc., but with angels and they’re all drunk on turpentine. Maybe I’m drunk on turpentine.

Chris:  Thank you very much! 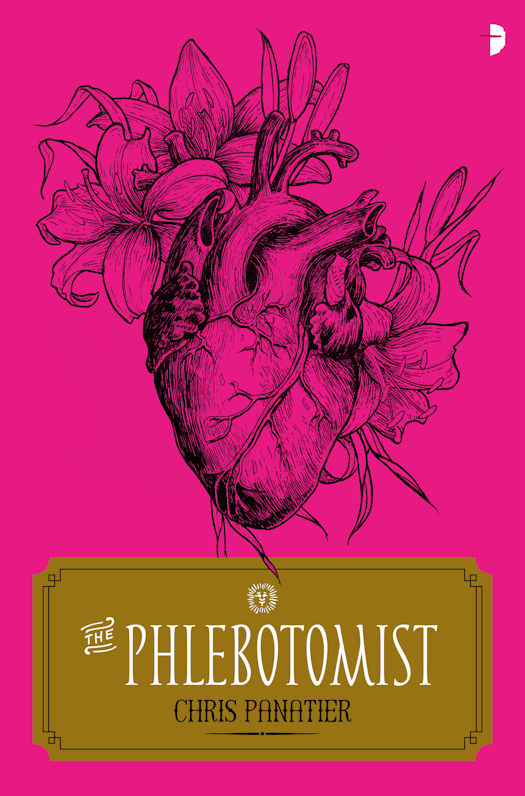 In a near future where citizens are subject to the mandatory blood draw, government phlebotomist Willa Wallace witnesses an event that makes her question her whole world…

To recover from a cataclysmic war, the Harvest was instituted to pass blood to those affected by radiation. But this charitable act has led to a society segregated entirely by blood type. Government blood contractor, Patriot, rewards you generous gift based on the compatibility of your donation, meaning that whoever can give the most, gets the most in return.

While working as a reaper taking collections for the Harvest, Willa chances upon an idea to resurrect an obsolete technique that could rebalance the city. But in her quest to set things into motion, she uncovers a horrifying secret that cuts to the heart of everything.

File Under: Science Fiction [ Blood Will Out | This Might Hurt a Bit | Be positive | Bloody Nightmare ] 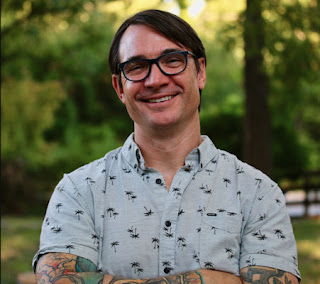 Chris Panatier lives in Dallas, Texas, with his wife, daughter, and a fluctuating herd of animals resembling dogs (one is almost certainly a goat). He writes short stories and novels, “plays” the drums, and draws album covers for metal bands. He plays himself on Twitter @chrisjpanatier.